Massey Ferguson made some tillers in the 70s and 80s that have a sleeve hitch front and rear. They are walk behind, but the handles come right off. The tillers have belt drive and a selectable gear box, 1st, 2nd and reverse. This tiller attaches faster that you can mount a plow. It has a kick stand so it sits in place you only need to back up to mount. 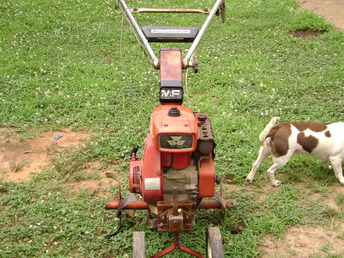 The MF285 rear side view 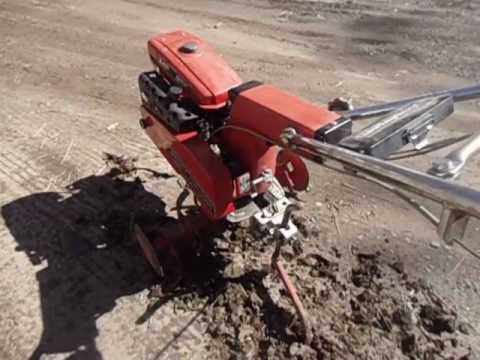 Handle is held on by a large threaded knob, which I permanently removed and re-did the control cables (shortened). Never going back to walk behind that big.

Maybe a MF285, but a good view of the front hitch. Looks like they put wheels and weights where the tines go. 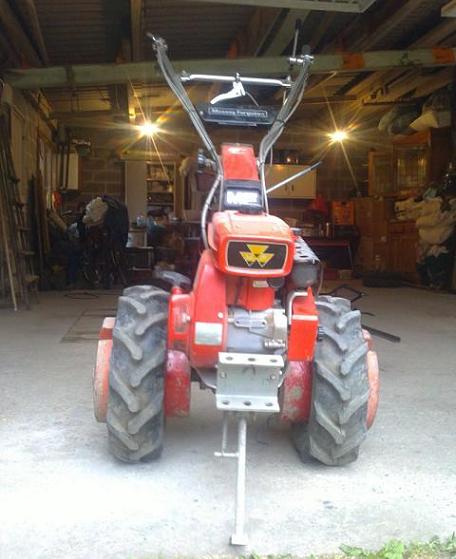 Not sure how many are around, but something to look for.

Scott Nicklas: Thanks for posting your (extensive) experience with Cub Cadets. My impression is that you're getting about the same results running your units at WOT as Dennis who routinely runs at less than WOT.

Jim's point about the 3200 RPM power band is well taken, and I believe Steve when he says that running the full 3600 RPM renders the best PERFORMANCE. Although Dennis is probably not wrong, the engine does NEED to be at WOT in order to perform well, and running at less than WOT certainly doesn't seem to hurt the engine.

Steve, Denny, Jim, and others: As far as the great oil debate goes, the manuals ARE probably getting a little long in the tooth. I've noticed a change in the recommendations in the newer equipment I've purchased in which 10W-30 synthetic is almost universally endorsed. I guess Dave Kirk isn't the only one doing some testing.

Judging from everything I've read, heard, and experienced, CHANGING the oil is probably at least as important as selecting it. Personally, I'll have to compare the cost of 10W-30 synthetic to the low-ash formulation that IH developed. If I standardized on the 10W-30, I wouldn't have to keep two different oils on hand in the shed.

I appreciate the well-rounded discussion and I hope some will find my summary helpful. The CAPS are an attempt to assert emphasis, I'm not trying to "yell" at anyone.
K

Jim, I've yet to see a stand behind tiller that ran the blades in neutral. That MF is awesome to be that versatile.
W

After all the searching for a KT17 and not finding anything that I could use, I opted for the B&S VanGard. I made the trip to Dunkirk, IN, about 2 1/2 hour drive and picked up the engine. It was a very easy install. I did have to shorten the throttle cable and move it to the left side of the engine (left side while sitting in the seat) as it did bind up with the sharp turns while on the other side. I ran it through the opening for the choke cable. The choke cable came through at the bottom of the panel (firewall) and works very nice from that angle. I like the fact that the engine has only one piece of tin (muffler cover) and access is very good to most all the engine. It does sound a bit different from the Kohler, but just as loud.
I plan to rebuild the KT Series II and then decide whether on not to sell it. So far this experience has been good, but a little pricey. I have pictures to post, but I keep getting the message: Your uploaded image exceeded the maximum dimensions of 800 x 600. Please shrink your image to be smaller than these dimensions. I will post asap.
J

This is just my personal feeling and by no means meant to be offensive to anyone. I personally would find it hard to put a Vanguard (Japanese - Diahatsu) engine in a CC Tractor, to me it would be like hanging the Japanese flag in my front yard. I try to buy American whenever possible, but that gets harder to do every year. However, the Japanese arguably make the best small engines, I wish my generator had a Honda and not that hard starting Tecumseh. I have heard nothing but good reviews regarding Vanguards, you will be satisfied with its performance. They are worth the expense. My daughter wants a Honda for her first car and that's fine. You just won't <u>catch</u> me driving it.

STEVE -Dew by 6 PM? We've had humid days but nothing that humid. I did mow one morning before the dew was off 3 weeks ago, a rain storm was supposed to blow thru around 2 PM which of course never happened.

I've been a little lax on blade sharpening this summer. Bet I have to run the Onan 500 RPM higher most places to mow cleanly. I'd like to be able to set the engine at 3200, 3400, whatever it's supposed to run, but with that Wonderful governor design the Onan has I have to be my own governor, it pulls down in taller grass, over-revs when I'm not mowing. If I jab the throttle up higher the engine ALWAYS picks up RPM right now, no laboring, so it's not a shortage of HP.

Have I mentioned how much I HATE Onan engines? Only thing good I can say about it is it's burned less oil this year than ANY other year of the 14 yrs. I've owned it. Maybe 4-5 ounces? in 50+ hours of running. I think the hour meter was put on new when the tractor was refurbished just before I bought it, clock shows 480 hours now. Engine was completely rebuilt as part of it's refurbish.
J

Do you run 30 wt, multigrade or a synthetic in your Onan? I have noticed my 982 burns a little more oil with the multigrade, which I use in winter.

Well, it's that time again! Actually a little past but who's keepin track.
Time to do a little reseeding. 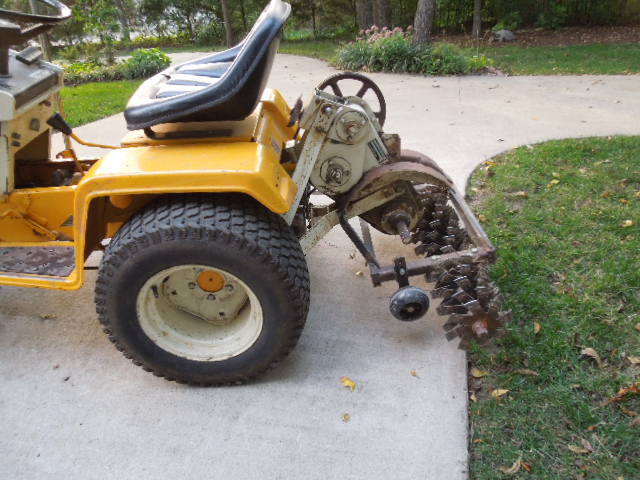 I sorta put this thing away wet several years ago due to health issues i.e., knee surgery. Now I need to do a little work on it.

I was picking up moisture on the tires at 6:00 Tuesday night.....nuts!