I tried to show some photos in my last posting, but it didn't work. The "formatting" area stated that upon posting I would be prompted for an image file to upload, I was not prompted. Can someone guide me through this?

Rich-
When you type up your post, put this in..
\image{the actual name of your image}

That cues it to look for an image...

Oh, and make sure your image is less that 50kb in size before you do that...
B

Did I miss something or did we start charging for posting in the Open Forum?

I was wondering if anyone else feels its a shame that cubs are worth more in pieces/parts than they are whole? It seems wrong that someone would tear down a good running cub just to sell the parts off it to make money. I am not blameless as I recently parted out a non-running 1650. Even though most everything except the frame was shot, I regret it now, and wish I would've fixed it up instead.

IH built a lot of cubs but there's only so many. I realize not everyone can afford to buy new parts from dealers. Project tractors and pullers also diminish the numbers of cubs. There are a lot of folks making after market parts but what about the cast iron rear ends? Arguably the heart of the cub.

Yesterday's Tractors doesn't allow "parted out" ads. Maybe there is some wisdom in that way of thinking. I put these thoughts out there to see how the rest of the group thinks and feels. I'm looking forward to reading the posts.
A

Bryan, it just cost me a dollar to post. You charging by the letter?

Mike, I kind of agree with you. I parted out a 125, I kept the hydro and a few other parts that I hope to rebuild into a custom Cub but I'll also be using parts from several parts Cubs that I bought from John B. The parts from the 125 that I did sell went to a guy that has a 105 that his father bought new that he wanted to refurbish. A tornado dropped a mature white pine onto it destroying the frame, fenders, dash, pedestal and steering column. Luckily the hood, engine and front axle were unharmed. Last I heard it was back together and in use. There are likely plenty of Cub Cadets still out there to restore/refurbish.
B

I think damn near every product is worth more as parts than whole. Ever hear of pricing every part of your car individually? It's a lot more than what you paid for it assembled.

I see your point, but if it were not for those parting out Cubs, I would not have been able to get Spot running and looking good. THe thing of it that we as a group need those that part out tractors to keep ours running.

Also, the people that take them apart find some of the problems we come across and can answer the question before we tare into our machines.
B

Long story. Just been cruising and saw the word FREE thrown in the reader's face one too many times, so I thought maybe Bob was charging for something I didn't know about, if ya know what I mean

Seems as though Travis' old tagline has made a reappearance, too

Mike-
Don't worry about it, both Travis and Don V. have assured me that they've been keeping all the chassis-serial number plates from every tractor they've ever parted out. Once their kids move out of the house and get a job of their own, they'll take up the retired-man's hobby of rebuilding all those cubs back to their former glory!

As far as Kraig goes, I know for a fact he keeps the ghost of that 125 he parted out in a closet at home...

Art, actually it's under one of the many silver tarps that I have scattered around my property some cover firewood others cover Cubs or parts thereof. )

...... there are some Cub Cadet parts that are actually stored inside the house, mostly Original parts and a 72,1x4/5 headlight panel but none of the parted 125 made it inside unless you count the K301, it's in the attached garage. Some of the parts that I've bought for the refurbishing of my K4K Original and my #1 125 are in the "Cub shed" that's temporarily filled with siding and trim until I can get it onto the house which wont be until next spring/ early summer. I sure wish the new siding and trim was completely on the house so I could have the shed space for Cub use. ( 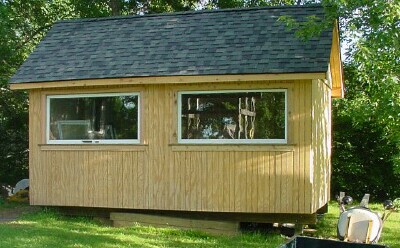 I really only see it as a problem when the parter-outers start making underhanded deals for tractors that would have gone to a nice home (or raising the cost of complete tractors (supply and demand)). I feel confident that we do NOT have that problem here. All the parter-outers I have dealt with are honest people just trying to make a couple bucks to expand their own interests in the hobby. I only get irritated when they post something for sale and don't put a price tag on it (*personal note*).

What scares me is what will eventually happen and that is when MTD quits carrying IH cub cadet parts all together. You guys know that every year more and more parts have gone NLA. The people that are making parts really should get a pat on the back. I would say that 99% of the parts they make are NLA from cub cadet and are not trying to compete with cub cadet. Several months ago I contacted one of these repro makers and asked if he made a particular part, he said no because it was still available, but as soon as it was NLA he would make them. What a great guy and what a friend of this forum.

Boy, if Bob charged for the Open Forum, that would have cost me at least $3.85 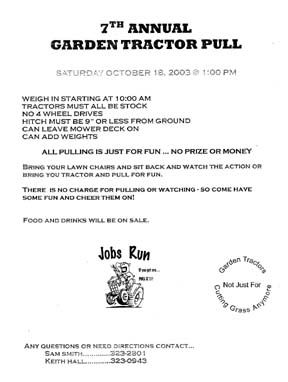 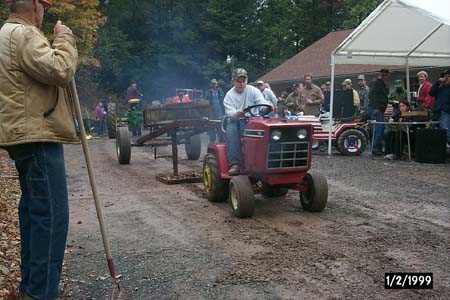 Art, wrong silver tarps (and one blue tarp), those are covering firewood. The ghosts are to the left (east).

Lots of fibercement siding and other lumber no floor space. ( 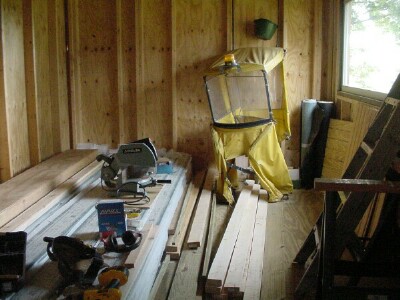 I am trying to adjust the speed control bracket on a NF 107. I am having problems reaching the upper bolt for the bracket. The manual says it may require deflecting the suction tube that goes to the hydro. I am afraid of pushing too hard on the pipe for fear of cracking it. Anyone else come up with a solution for this problem?