Allen:
Neither of my B&Ks were exactly cheap, but they were service meters, not lab quality (although they have stayed amazingly accurate - I bought both when I was doing service on 2-way radios, so that makes the younger one almost 30 years old and the other one older than that (the newer has an LCD readout, the older is LED, both good sized 3 1/2 digit). Both of these have the zero adjust, like my old Heathkit VTVMs do. The Micronta is a bench meter (true RMS) and it does not have a resistance zeroing adjustment - that one was over a hun when I bought it..

Again, in buying a meter, you don't have to spend a lot - I'd say $20 - $25 will buy you a pretty good one these days (my B&Ks were both in the $150 - $200 dollar range when the technology was new). As with the resistance measuring ranges, I'd also look for a good low voltage range - at least a 1 volt (that meanes it'll read up to 1.999 volts if it's got a 3 1/2 digit readout). The reason for that much accuracy in working on vehicles is so that you CAN measure voltage drop or gain with some accuracy..I was surprised that the worst of the Cen-Techs that I mentioned earlier - the amp probe one - only has a 1 volt resolution - It'll tell me 12 volts or 13 but not the decimal value in between - useless...

Also (as long as we're this far out on a limb with Charlie), look for the ability to measure amperage in a high range of 10 to 20 amps, if possible. This is usually with a separate jack for the meter leads and may not be fused. This is useful for trying to figure out why the battery is going dead..lift one of the battery leads and see if there is current draw with everything turned off. I have an Stewart Warner ammeter with jumpers that I start testing with, but once I know I'm not looking at a dead short, I'll revert to a multimeter..
Not trying to make this into an electronics forum, but a few good tools make for easier repairs..

Here's where I usually read the mail from...tough to get a Cub on this bench.. 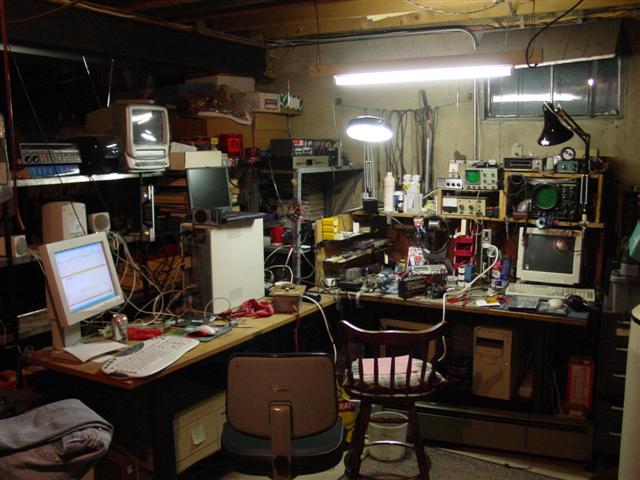 Here is the digital Volt/Ohm meter I have.
It is capable of more than I am.... but anyway, just for your consideration:

Hey guys , Do any of you know where I can find some info on the 4x4 cub 100 ,that is in the custom section? I would like to know what axle he used for the front. I cant match it to anything that I have ever seen or know of.

Joe,
do a search for dana and 4x4 yeilded this:

One thing I forgot to mention is while you have the pto off, run a 1/4-20 tap in the three set screw holes. It cleans out the rusty crud. I use a small tad of blue locktite on the small set screw on reassembly but that's up to you.

Okay electrical gurus... I've raised this question before, but it got lost in the shuffle. Is there a readily available solid state replacement for the mechanical regulator on the old starter generator? I work with a guy who made a couple of them years ago, but I figure it's got to be an off-the-shelf item these days. Google and a call to the local alternator rebuilder have both yielded a solid state generator cutout, but I don't know if that's all it takes to get the job done.

Earl L. I have a writeup on how to remove the pto clutch and basket pulley on my webpage. Check out cubcadetman.com. Hope it helps.
L

Dave Ross This is a pulley from Cub Cadet Specialties. It is a 4" pulley. Part no. IH-126393-C1. I totally rebuilt a 44A deck, All original except the POR 15,Gator blades, and the speed up pulley.
M

Jerry M: Maybe the fact that your inquiry has absolutely nothing to do with an IH built Cub Cadet Garden Tractor just might be the reason you didn't get an answer...

Sorry Myron. I neglected to mention (this time) that it's on an IH built Cub Cadet 126. The mechanical one is working fine, but it's a pain to adjust and in 40 years I'm sure there's been an improvement on it. Jerry
D

KENDELL - How good are FLUKE meters? My EE's at work years ago always used to swear BY them, not AT them.

No pics today, but I did set the Kohler into the frame... That hardener works great, as it is pretty dry already... Nice and shiney, too...

Flukes are great meters, any meter less than $125 bux should be avoided, especially if you're working with 100 volts and up... You want at least a CATIII rating..

Scott:
Let's not scare everyone away from getting a decent low cost meter - the only high voltage on a Cub is the high tension (plug wire) side of the coil, when the engine is running.....everything else is 12 Volts, unless your measuring the stator output on a later non S/G engine, which I believe may peak around 36 volts AC before it hits the regulator - still not all that high..

Flukes are good meters, although Fluke's high pressure sales of hearing aids is a little tacky...

Jerry:
It should be possible, but why bother - I've only adjusted the regulator once in 20+ years on the 129.. A solid state cutout, if it works like the cutouts on the older (much older) Fords, would keep the S/G charging at some preset voltage. It would probably taper off above that voltage - on the older Ford generators, it would actually open a relay in the filed winding, thereby "cutting out" the voltage to the field, stopping charging. IIRC, they would actually buzz open and closed. You adjusted them by moving a third brush on the generator back and forth that was situated between the other two brushes while watching the output on a meter.

My oldest is a Heathkit VTVM (yep, vacuum tube) that my dad built in 1955.... still works.. I have never owned any lab grade equipment, but have always had calibration standards of some type around to verify accuracy. Really, my bench equipment is getting old, but I'm not sure how many people that did electronics repair still have ANY bench in today's use it and pitch it world..
Switching gears a little - cheap digital calipers?? I've bought a couple from HF..worst part is the jaws magnetize, hold metal slivers and then give a false measurement..but they sure are easier to read than an old vernier style. Really handy to have.
D

Kraig McConaughey "Keeper of the Photos"
Got some of them here, well I know I got 4 at lest heres two. I`am going to do some welding and hole repair on the fenders. ( well i`am gona try lol) later Don T 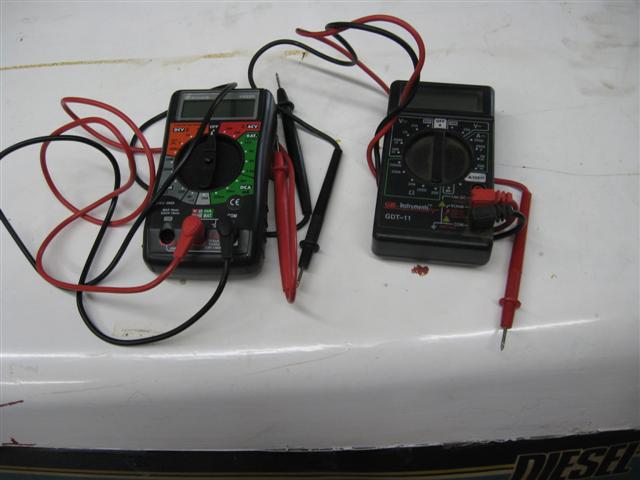 To follow up on Scott's post about CAT III rating on meters, here is a pretty good explanation of the rating system. I'll quote this part of it.."What CAT and voltage rating do you need? Do you work on three-phase motors? Do you work on motor controls or soft-starts or variable speed drives? Do you work on 277V single-phase lighting circuits? Do you work in distribution panel boards? If you answer yes to any of the above, you're in a CAT III environment. These kinds of circuits could have enough energy to cause the fireball discussed earlier."

Sorry to stretch this out in the tractor forum, but good tools........

I purchased a Fluke Amp clamp meter many years ago. Can't recall the model(goes 600V and 200A? with true RMS and hold feature), it wasn't the cheapest. Still works perfect and I use it constantly at home and work.


One quick question about snowblades: I saw a few days back someone posted about having a POWER ANGLE set up on theirs. Is this an option or was it a conversion? I can see just mounting a cylinder(like the typical lift cylinder) on the blade. Not sure how it's controlled? Do you use a typical hand control or just a toggle switch/solenoid spool valve.

With the little use it gets, I'm thinking of tapping right off the hydro in the rear/or off the lift supply and running a pair of lines up front with quick disconnects under the front end. I'm thinking it would be more then sufficient to control the blade angle.