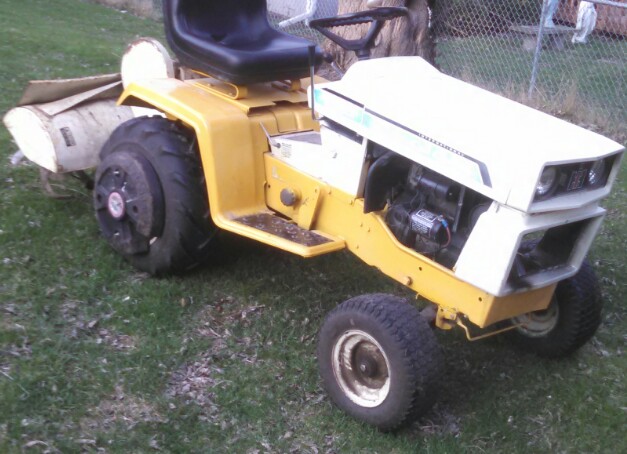 Yay! I can post a pic! This is my #1-1450 with tiller hanging out, no gearbox on yet. Its still on #2-1450. Was repainted by PO wrong colors but not bad. Popped a battery in a fired right up. Has the cradle mod and new iso mounts, and a super steer front axle
E

Well, only pic for today. Going back to my 1450/1650 conversion, the k341 is an 'AQS' but has a shaft sticking outgrill screen and double pulley on cub PTO side. When I figure out what I did right I'll post those pics. Oil pan looks identical to cub.
W

Marty, that is intriguing. Those are pieces I've wanted for my Cub anyway. I may just forgo the tiller and go that route.

I've already got our garden tilled, but I may want to expand it next year. I may also want to move my potatoes back to the 'real' potato patch my great uncle used for years. That may be the direction I go in. Thanks!
E

Billy, you'll still need a 3 point. I've plowed fine with my 1200. Probably a few hundred bucks and less moving parts compared to a tiller. I looked long and hard and luckily came across my #2-1450, tiller, snow blade, Qa42a, and cab last summer. Shed's full and I almost bought another 1450 last Saturday...
I love my 1200 gear drive, but Jeff's tag line says it all. Especially the hydraulic lift for lifting that blower
W

I would like to pick up a 3 point- it will make the tractor much more versatile. I like things to be as versatile as possible.

As far as the hydro's are concerned, I am very old school in that I prefer things to be as simple as possible, that way when I have to fix them, I can spend less time diagnosing and repairing. That is why I prefer the gear drives, they are simple and just work. I'm not taking anything away from the Cub hydro's, I believe they are the best hydro static tractor ever made, but they just ain't for me. Remember, Einstein said "Everything Should Be Made as Simple as Possible, But Not Simpler." Isaac Newton also figured this out: “Nature is pleased with simplicity. And nature is no dummy.”

Of course, if the price was right, I'd most likely pick it up...

Agreed, those rear implements make life great. However, I'd love to have a spring assist on the 1200. Its on mowing duty again after I deal with another head gasket. Going to borrow a machinist flat bar and check head and block. May have to switch some heads from parts engines.
W

A spring assist would be nice, but I'm young, so lowering/raising the deck/blade doesn't bother me yet. Though it would be nice for Dad, so he doesn't have to work too hard.

Good luck on the engine, i'm sure you'll get it fixed!

Thanks to everyone for the EXCELLENT information today. It is nice to know us young people have a resource like this when we need help. You guys are awesome!

Crazy as it sounds, hydros are just as "simple and reliable" as the gear drives. With all of the time and effort (and $$$) you can spend every 15 years on a clutch rebuild, the cost of upkeep on the hydro over those years is about equal, IMHO.

Don't count the Cub Cadet hydro out, they are as bullet proof as an "automatic" transmission gets....and have some very nice bonus features.....like Hyd. Lift!!!!!!
J

yea, Steve! You know Billy, I'm an all-gear drive IH Cub Cadet fan myself. I believe the gear has a slight advantage in power transfer to the rear wheels, and maintains an easier, constant ground speed while on the move. However, my first hydro drive IH Cub Cadet which is a 1450, is an absolute dream to operate. And its all Hydro Harry's fault, lol! All I'm suggesting is, the best way to complement your all-gear drive is to have a hydro drive unit in your IH Cub Cadet line up!

BTW, I dont know if you have had the chance to use an IH implement on your tractor with a spring assist, but those spring assists are wonderful! As tuff as I am, I would spring for one of those assists should you come across one in your adventures!

Agreed, this is the best IH Cub Cadet forum ever!!!
W

Like Steve says, the hydros are pretty much bullet proof. If you were to ever mow a lawn with lots of trees and bushes you would eventually prefer hydros. They are so much easier to use for mowing simply because all you need is two hands. There's no need for braking because neutral on a hydro means stop and stop they do. I prefer the 1x9s because the shifter is on the left.

You'll find there is a place for gears and a place for hydros. I grew up using a 128 so gears were a part of my mowing and I knew no different. I also used the 128 for garden duties and Pop didn't need lift assist as long as I was the one doing the lifting. I fought that plow for years (and have the back pains and bad left knee to prove it).

And as far as power to the ground...there's little, if any difference. Traction is traction.

If you ever get a chance to own a 1x9 try it. I bet you'll see the difference.

I own both.....mostly hydros for the hyd lift and power steering, but I like the grinders too. My fleet has a bunch of 82 and 72 series supers, hydros, but there is also a 582 in the shed!
W

Thanks for the input guys. I would never turn away any IH Cub, hydro or gear drive. I'm just stating my preference is all.

I had to replace the clutch disc in my 108 a couple years ago, as it wasn't fully disengaging, and I would have to throttle the tractor down to slow down the drive shaft enough that I could change gears.

I was nervous about doing it, but I read through the service manual, and it really wasn't that bad. I was fortunate this time, as everything else was still in good shape yet. That was what made me really like the wide frame gear drives specifically; the drive line is really easy to get too.

I think a hydro would be nice for Dad, specifically one with hydraulic lift, so he wouldn't have to work as hard anymore.

If I come across one, and I've got the money, I will pick it up. You are not the only one saying it's worth it, so it must be!

Wayne,
The owner I bought my 108 from had a few trees in his yard, but his yard was completely flat. I could see why he bought a gear drive for it. I couldn't tell you about the differences in pulling power, as I've never used a hydro. I can say that I used my 108 to haul around a 4 by 8 trailer, loaded with a Chrysler 318 and 727 overdrive still bolted too it. Everything weighed roughly 1200 lbs. The 108 pulled it like nothing was even there.

With everyone talking up hydro's so much, I may just start looking for one. A 129 would be OK, as they are the most 'common' wide frame hydro I have seen.
W

The one thing to look out for is the shape of the trunion slot and how well the tractor responds to shifting. It can be an involved repair that's usually been ignored by POs and requires the tractor be split. After everything is back in good order and once you learn how to fine tune the linkages the 129 makes a great mowing machine. Now, with proper maintenance, you have a mower/GT ready for many, many years.

QLs have their place and I use a couple myself but the 1x9s are my favorite hydros. Right now I use a 1650 dedicated to tilling. It works well but having to operate the shifter and the lift on the right makes me want a gear drive with a creeper. IMO that's what was meant to be.

Wayne-Move that lift lever to the left side. I did mine and it works great
H

John L - thanks for the "plug" on your love for the 1450. As most everyone on here knows it was my first love and will always have that place in my heart. All this talk about "gear-grinders" is ok but the Hydros are the Top of the Line units to have, and Steve's right about the bonus hydraulic lift - just don't get any better.

The only sad thing I'll add is that although both the Hydros and the Gear-Drives are pretty much bullet proof, they seem to be making stronger bullets these days and problems are beginning to show as these units get older. BUT, with a little work that ain't mind bogg'ling we can end up reinforcing them and they're like nearly new and good for another 40-50 years.

And here's another thing to remember - someone came up with stats that at one point IH was selling 9 Hydros to every Gear Drive, and since we live in a democratic society "HYDROS RULE!!!!!!"

Thanks for the tips! I will be sure to remember them if/when I start hunting for one. I've heard the 12 horse Kohlers were EXCELLENT grass cutting engines, but I haven't bogged down my 10 horse yet

That was another thing that has kept me a bit leary about owning a hydro, as they can be a bit quirky, but the overwhelming response from everyone is slowly changing my mind about them.....

At 50 years old, ALL equipment starts to show their age. I don't care what color it is, everything has problems. BUT, for what I use my Cub for, that transmission should last my lifetime.

Also, based on your statistic that hydro's were outselling gear drives 9-1, that means at some point my gear drive will be worth a pretty penny!

Billy,
Interesting thought about the gear drives. Maybe the value of my GD's just went up!

Spring assists are not all that hard to find.

Wayne,
Don't get on a zero turn for mowing. You won't go back to the hydros!!

If you don't believe me, just ask Gerry!

You know, the gear drive vs hydro discussion got me thinking, I've been a hydro guy (with hyd lift) my whole life, except for my 86, that I got 1.5 yrs ago in town with a bust rod. I fixed it, and enjoy using it, but I'm really an 82 series kind of guy. Ive been looking for a 582, red being my preference, but what are the nuances of the Briggs? It makes me nervous as I'm not familiar with them; any other 582 specific stuff to watch for? They seem a bit scarce around here but I'm hoping to land one for my next project. I like running my little gear drive 86 and a 582 would be even nicer I think.

Briggs 16hp in the 582 is a good running engine. I have had 2 different ones and both have been great performers. It uses the somewhat goofy Briggs vacuum pulse fuel pump built into the carb (can be fun to rebuild, but not too bad).

They make good power and pull well. Come with 17 tooth second gear (it would be fine with the faster 19 tooth, given the HP available).