Hi, I am new here. I have read through many Hy-Tran posts to get a good answer first but I got tired of reading. I am working on a 682. Is hydraulic transmission fluid of other brands ok to use? Such as Super Tech from Wal-Mart or Harvest King from the farm stores. They are labeled as meeting the requirments for Hydraulic/transmission applications.
M

Thanks, thats what I needed to know.
M

I have anoter question regarding the mower deck for my original. I am amazed at how little play there is in the spindle bearings--almost none! However, they are noisy. This deck does not have grease fittings on the spindles. I will replace the bearings, but I am wondering whether drilling the spindles to add zerk fitiings and shoot the grease to the middle of the bearing area would be of benefit. The bearings ( at least the original ones) are sealed units. Would there be any benefit to being able to pump grease in that area? I suppose it would displace any water that managed to get in there. Is this a good idea, or am I over-analyzing the problem?
T

James,
The local IH dealer told me that it must have B6 on the label. That's the thing that soaks up the water that might get into the Hydro. I bought a farm store brand and found the odor to be very offensive. It smells like a dead animal or something. So for me the extra 12 bucks per 2.5 gallons is worth it for the original Hytran-Ultra.
B

I think you're overanalyzing a tad. That deck lasted, what, 40+ years the way it was designed. Just replace the bearings and use it.
M

Bryan,
Yeah, I was thinking along those lines, also. I am amazed how well it has stood up. Maybe its the engineer in me--I alsways want things to be perfect---not much on cost/benefit analysis.
One of the main reasons I am switching to the Cub, is that I had to replace the bearings in my 10 year olad MTD-built- White every year--and it was still throwing the belt by the end of the season becasue there was too much slop in the bearings.

OK, so simply replace the bearings and go for it.

I guess I could have posed my question a little more clearly. But Steve your on the right track. I'm looking to compare not so much the layout of the deck blades but more how similar the overall shape of the two decks are. As I've been looking for a bagger, I know that I will not find a direct fit but don't want to have to do much to make the chute fit the deck. I found a bagger that says it fits an x82. My thought is that the decks on the x82's and the 149 may be very similar and this would mean less hassle to make the bagger and deck come together peacefully. The deck on my 149 has the following identification tag# 441 U1111.

If it is an Original timed deck it should have grease fittings on top of the spindles.All that I have seen have them even the one off serial #682.
M

Well, I am new at this, but it does appear to be an original timed deck. It looks to be very simple construction, as there are no compound curves anywhere. Anyone with a sheet of 1/8" steel and a large enough brake could fabicate one. The deck is simply folded metal and the ends are welded in.
It matches the diagram in my parts manual, and that exploded view does not show zerk fittings either.
Not being confrontational; just trying to learn.

I have a timed deck that came on a 70, one spindle has a fitting, none on the other. I don't know the history, don't have the manual, but something was replaced somewhere. 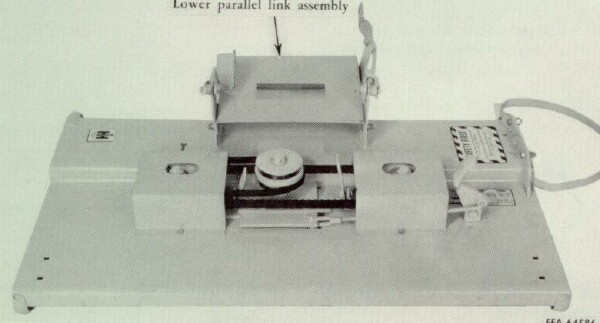 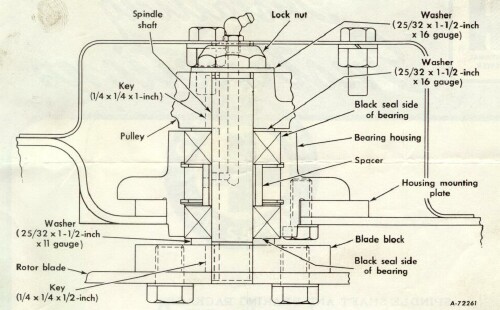 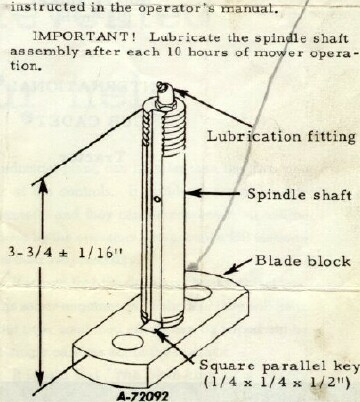 Digger's ilustrations are correct. Why else are those holes in the spindle pulley covers?? So you can get to the zerks....

OK,
Well my deck has no zerks or holes for them. I will drill and tap and add them. It looks as if the hole to let the grease into the bearing area is drilled thru the keyway.
Thanks for the pictures--not like the copy I have, but very helpful.
M

OK,
Well my deck has no zerks or holes for them. I will drill and tap and add them. It looks as if the hole to let the grease into the bearing area is drilled thru the keyway.
Thanks for the pictures--not like the copy I have, but very helpful.

On the 2 timed decks I have with pulley covers, the covers are yellow. And all of the covers have holes in them to get to the zerks.

Also on all 4 decks, all of the spindles have grease zerks at an angle, just like in Charlie's center picture.

I'm not trying to be confrontational, believe me.
All I am doing is saying what I have. Maybe its an early deck, or an oddball, or maybe some previous owner replaced the factory spindles with ones of his own fabrication. I don't know the history as I've only had it for two weeks.
However, I do have 2 (pretty good) eyes, and I assure you there is no provision for grease fittings on these spindles.

I will add them according to the picture in the previous post, as I want to improve the longevity if I can. I do appreciate the information.

On another topic, Is there a flat oil pan that would permit installation of a 12HP Kohler without cutting the tractor? The oil pan on the 12HP engine I have as a spare extends below the bolting plane. It also bolts up from the borttom into threaded holes in the pan; not down from the top as the original 7HP. I have heard that any engine larger than 8HP would require butchering the tractor. I have also been told that 7HP was enough to run any of the accessories available. Is 7HP "enough"?
B

Your post was moved to the proper subtopic. We have a place to discuss tools and whatnot.
N

Just to let you know, it was the PTO switch under the seat. I jumped it & everything works okay.

Thanks for your help,

Michael: I wasn't giving you hell, just letting you know what I have.

Sometimes the pictures IH used in it's literature, isn't exactly what was released to the public... The photos were of preproduction/test units, and had small variences from production pieces.

There were differences in the early '61 decks compared to the later '61, and '62-'63 decks. AFAIK the differences were in the bracketry under the center pulley, that put tension on the short belt to engage the deck.

I have an early '61 deck, and also the other 'later' styles.

If you have spindles with no grease zerks, and pulley covers with no holes, it must be that a 'previous owner' changed them/made them......OR, you might have something IH used in testing on the pre-production tractors!!

Please -DO NOT- modify anything on your deck until you have confirmed if it's a piece of IH history, or a PO 'do it yourself' modification.
T

Kraig,
I'm pretty sure I have the whole "Library" of disc's but I can find something. Need the parts breakdown of the Brinly sleeve hitch plow. Can ya' help me out here Buddy?