Take it off. It's not worth cussing working on a hydro within the confines of the fender pan......once you get the foot rest bolts off once (might as well get it over with, you'll need to do it some day), it's a 10 min job to pull it.......well worth the preserved knuckles and clean language

Like Steve sez, .....plus use plenty of "Nev-r-seize" and <u>DO NOT</u> repete <u>DO NOT</u> use the same kind of hardware. Those slotted flathead bolts suck.

Thanks guys. Don, thanks for that offer. I'll take you up on it when the time comes. But I think my discovery tonight gives me time to re-evaluate the need to open it up.

My plans for tonight changed, so I had time to work on the 782. It was an evening of "Good News - Bad News."

Good News: It turns out that my PB Blaster treatment on the footrest bolts was effective. I was able to get a vise grip on the heads and a socket on the nuts below - slowly all six came off.

More Good News: Once I got the hydro area cleaned up some, I started the tractor and raised the snow thrower, and immediately saw the Hy-Tran flying. You can see it at the 10 second and 30 second points in the video: http://youtu.be/btsc93OZZKw

Bad News: My tractor apparently came with the rare two part flare on the lines, which allowed the line to "chatter" under pressure. 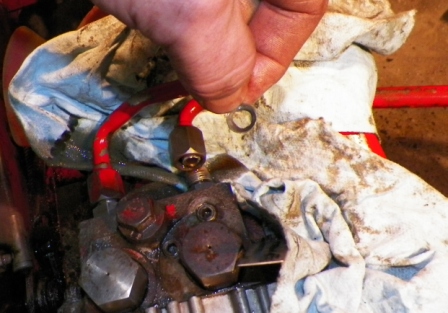 Good News: I think I solved the "chatter" sound mystery.

Bad News: I couldn't get the line reconnected to the hydro(to minimize leaking until replaced), so I decided to disconnect the other end of the line from the hydraulic lift control.

More Bad News: There's not much room under the dash to loosen the nut.

Good News: Removing the gas tank will give more room to work.

Bad News: I discovered the shut-off valve on the gas tank is defective - discovered AFTER I thought it was off and I removed the fuel line.

Good News: I finally got the tank emptied into my F150 tank.

All in all, I'm happy with the good news. I got the footrest bolts out & like Steve B said, it would have to be done sooner or later anyway. I found the leak and I'm optimistic that is where my leak was all along, and I may not need new hydro seals.

I really appreciate all the input from everyone, and I'll let you know if my problem is solved, or just reduced!
H

Lip, good to hear you found the leak! Thanks for the very entertaining good news/bad news post.

What Kraig said. Sorry about the gas. SEE WHAT THE PRICE IS!
D

Glade to see you got that leak found and now can repair it. you will be up and running soon I bet .

Rick Beem, I just placed an ad for decals for my 129 and I noticed your ad in the wanted section for decals. Thanks.
William
S

Got my (new to me) tiller mounted on the 73 today...I've never run one before but looking forward to trying it out for the first time later this spring. THEN it'll be up for a summer paint job while the (also new) Haban 402D Sickle Mo finally gets its first turn on this tractor. Enjoying these old gadgets...and hoping they'll actually work! 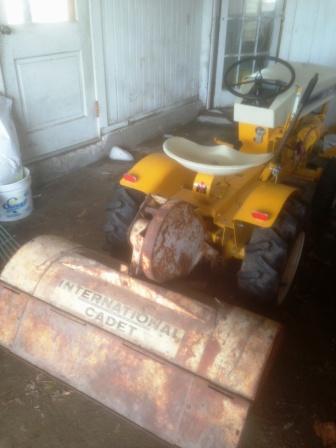 Steve S - Looks like you're having some fun there. I think you'll be quite surprised by that tiller. I've heard lotta guys claim it really turns the soil into powder. I do hope you have a spring assist on your 73 to supplement your Strong Arm lift.
S

Harry B -- Spring assist and creeper, too

The 73 looks great with the tiller on the back. You won't be disappointed with the way it works.
S

Daniel G -- The tiller itself will look even better with new paint and decals but I wanted to try it out first. Any thoughts or advice about the disassembly process for sandblasting and painting? I'm not sure which tiller parts can (or shouldn't) be sandblasted...Has anyone here done this?
J

When you have intentions of replacing the broken hydro release tab on a cub 107... do you have to remove the rear end? or can you squeeze in there.... just painted the dang thing purple sunday.. Grrr
J

Steve I think you will really like the tiller and be very impressed. Congrats, I have one which I run on my 125 it works really great, I was really impressed first time I used it. Nice 73 btw.
B

John: I can't imagine squeezing it in there:

Looks like you have to get small or split the tractor to get to it.
Those wide frames are a lot easier.

Has anyone replaced the fuel shut-off valve in the plastic gas tank? I need to replace a leaker on my 782. The new one won't be here until Thursday, but I thought I'd remove the old one & be ready for the new one. Unfortunately, I can't tell how it's connected. Any advice will be appreciated.