Mike, There is a tiny wound spring inside the switch that gets corroded and the windings get stuck together. This spring holds the key to the detents in the switch.

I have repaired several by taking them apart and cleaning everything then reassembling them.
You have to carefully "un-peen" (is that a word?) the case from the fiber backing to get them apart.

Yet another reason why these machines do not like to set out in the elements and will protest that fact!!

Well said.
Just like two years ago, when I tried removing the front axle pins from a couple of 70/100 axles.
Boy, that was some job!
Took 26 tons of pressure to get those suckers out.

This tractor has NEVER spent a night outside since new. I am the second owner, got it from my F-I-L. We both keep it in a garage or shed but always under cover /indoors. The spring works almost to good. LOL.. I figure the pins were getting stuck and allowing the key to self return.

My comments were not directed toward you, just in general.

Glad to hear you are taking good care of your tractor.
That makes a huge difference when it comes to repairs or refurbs.

I have seen locks and switches do that too.
I have a switch that will turn without a key several times before it stops turning without one.
M

I know Marty. We're all good. I didn't mean to imply otherwise, but I figured someone / someday might read that post with a similar problem so I posted about it. Just sharing an experience that I haven't seen or heard about before.

It was kinda funny to be driving while mowing and one hand on the key and then to switch hands so I could stop the pto and then steer into the shed that it barely fits into.

Good reason to take the keys out when hauling them.
I have lost keys that way till I repaired or replaced the switches.

Attended 2 shows over the weekend.
One was the Orange Spectacular in Hutchinson, MN where My Uncle was on cloud nine as he has AC GT's and another in Hastings on the way home where I was pleasantly surprised with a nice Cub Cadet display out on by a local family.

Well, I guess there was one Cub at the orange thing, or at least what was left of it.....
It was, though, nicely done if not my cup of tea.
from the ser# tag, it looked like it started life as a 1X8 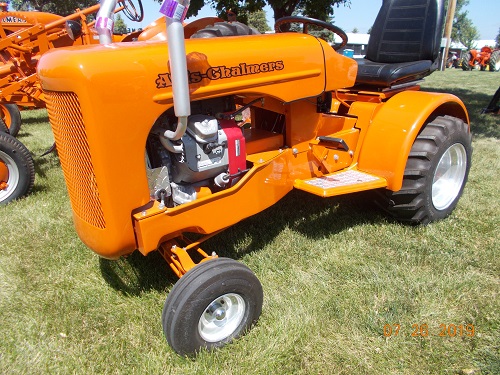 Next up, the Chapter #5 summer show this weekend at Marshalltown, IA
Hope to see some of you there, look me up!

Then it's on to Rollag, MN for Labor Day weekend
T

I suspect that there is a thread on this but I have not been able to find it. I have an 1811 (and a 1872) that puts down pressure on the motor deck. The clevis pin is not installed. I believe that the rockshaft is frozen/rusted to the shaft that it slides over. If this is the case, what is the easiest/best way to free this up. Thanks

David - I have to make sure my long suffering next door neighbor doesn't see that or he'll want my parts 149 to make a little AC CA....

I will have to say it was nicely done. Thanks for the pic.
Looks like they could have used a "green" tractor instead of that nice cub though.

Did ih make a wheel for cub cadets that have the valve stem on the inside?