Bob P. & Charlie
I have no experience with Cub Cadet loaders but I can say every quietline I ever owned had frame cracks where the axle channel is welded to the left frame rail. Anyone spending time or money on quietlines owes it to him/herself to check this out. JH
R

So...I blew the engine on my model 86. I have a 12 hp from a quietline...can I convert that style to a starter/generator?

Any help would be greatly appreciated!

If the QL engine still has the electric clutch, I think I would do a drop in and re-wire for the clutch switch.

Rich, long time no post! Bummer about your 86. I was just looking at photos of it and your Haban sickle when you were repairing the mounts on the Haban. What ever you decide to do with the 86 re-power, be sure to keep the 8hp parts that are still usable as I believe it has some special parts that might be NLA. But then again I could be wrong.

It could be just the crank that's special.

Crank and starter/generator bracket are special, NLA, hard to find, etc...there might be more things that are too. Paul Bell would probably know.

Loader is a Kwik-Way.
F

Matt S.: I think I had a problam like yours a couple years ago and it ended up being as simple as a loose bolt or 2 in this area: 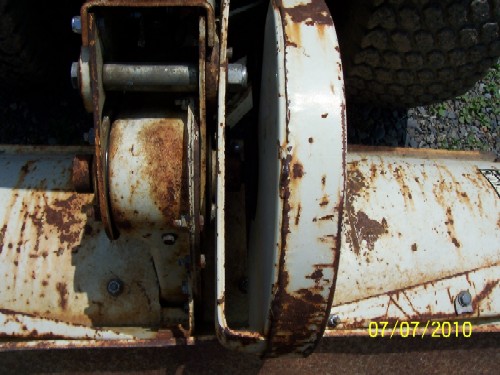 I remember it was so simple that I did this -

Steve - Would I have to rewire for the starter as well too?

Kraig - Yah, I know it's been a while...life changes priorities. I don't think there is anything salvageable. The motor is over at my FIL's right now as he's rebuilt these a bunch of times. He said he's never seen one grenade that badly...

Rich, here are some electrical diagrams to compare. 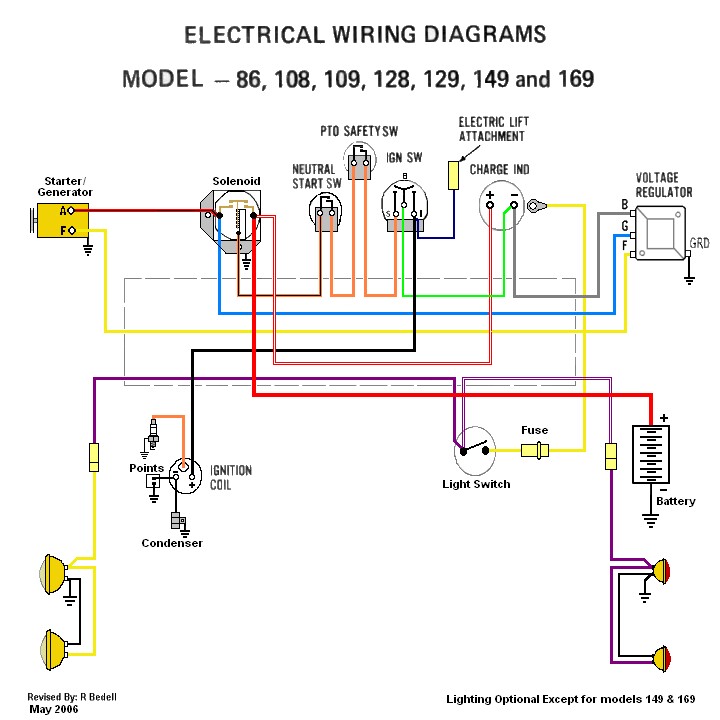 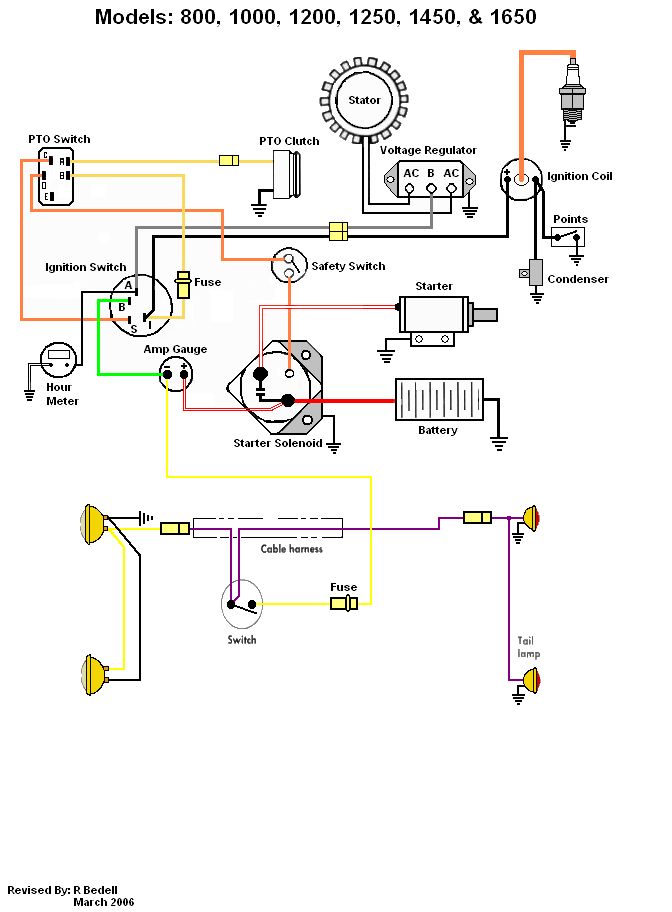 Thanks Kraig... looks like a lot would have to change....
F

Ya know, I hope everyone appreciates Roland's colourized wiring diagrams as much as I do. Of course, to me, it's just more magic - not a clue how he made them.
FWIW, I'm using "waiting for parts (belts)" as an excuse to not be working on a mower deck. Truth is, it's too darn hot, even here, to think about wrenching. 87* in the house as I write this. Good thing the ammo's in the cellar, it's 15* cooler down there!!

Richard, Kraig, Matt,
As kraig and Matt said, the 86 crank is different, has a longer "nose" on it to get the PTO clutch out to where it lines up with the mule drive pulleys. The starter/generator bracket is also different, to move the SG forward for belt alinement. The correct muffler is different, it looks like the round pepper-pot style used on most 100's but has a short pipe angled out the side rather than all the little holes that are in most pepper-pot types. The air cleaner is also different. It is smaller in diameter than what is on the 10-14 hp engines, and deeper than the one on the 7, 10-14 hp engines. I don't know about the air cleaner, but the other parts are NLA as far as I know.

Roland's diagrams are SUPER NICE,and useful. I really appreciate all the work that went into these.
Frank,
It is 73 degrees at my computer and 103 degrees outside! Too hot for me, plus I have been in the heat all day at work. Gonna enjoy the AC this evening.....
Now my wife is wanting me to grill burgers for supper!

Hi all. I heard some metal on metal from the 44A while mowing today and pulled it in the shed. Why I did not replace the idler pulley when I replaced all three spindles and the idler spring about 3yrs. ago is beyond me. I also replaced the P.T.O. brake shoe which I had purchased from Charlie about 2yr.s ago although the 35yr. old one still had a few years left!!. 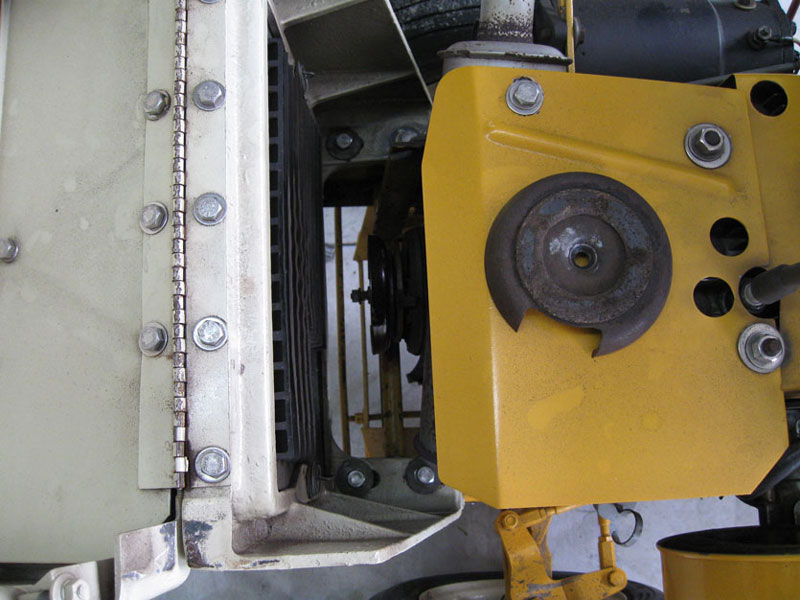 Here is my black engine in honor of Harry's return to the forum. 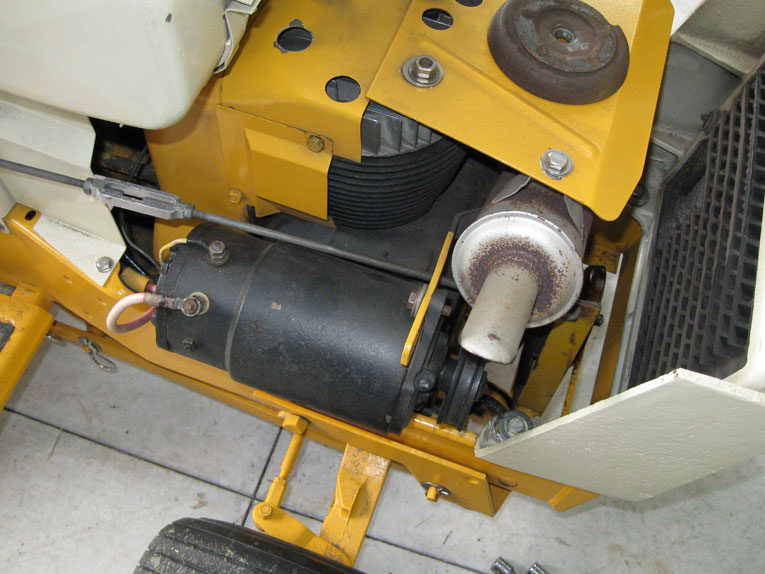 Waiting on the new part. 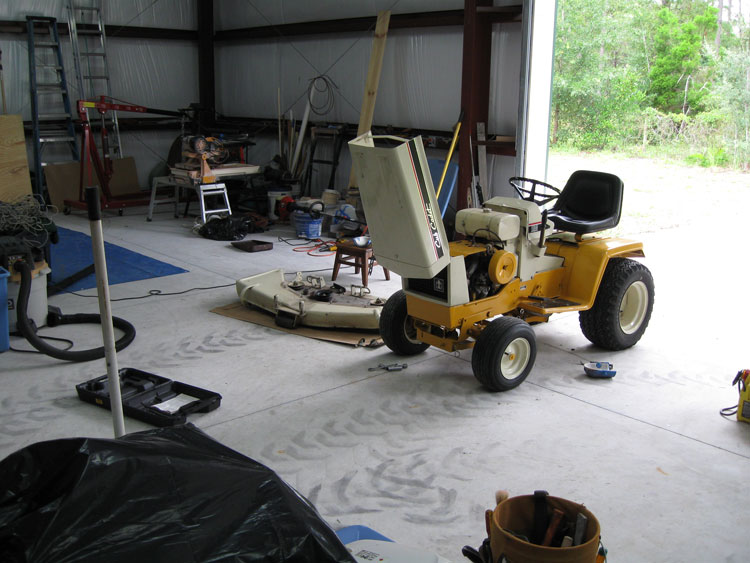 Also, did you see my post back a page or two? Asking about how much $$$$ MTD paid IHC for the CC line? People on the RPM forum were discussing that yesterday or Monday.
L

Hopefully with the holiday over I can find someone out there has a QA-36/42A snowthrower mounted to a 102/122 and if so can tell me if/how it can be mounted. I would rather not make modifications to the mount if they are not needed.
B

Bill in Georgia, according to CC Specialties (see link above) yes...

Lucas & Kraig, Thank you for the info.

Dennis I tried to email Jim Steel. I googled him and haban an email address came up from 2004. I'll see what happens.
B

Probably, although if the harness is used and OEM, it's not worth the trouble. Those cloth-covered wires in the harnesses in the 1x6/7 tractors deteriorated horribly and cause all sorts of problems. If you're going through the trouble of putting one in, you might want to go with a new one.