Dennis:
In 23 (going on 24) years, I've replaced:
Spindle bushings (once)
Tie rod ends (lost count till I got the heim ends)
PTO throwout button (lost count till I machined a brass one)
PTO rebuild kit
Driveshaft rag joint and a rebuild of the drive coupler
1 set of S'G brushes (unnecessary)
1 S/G belt
Axleshaft seals (cleaned the brake pads up after)
1 points and condenser set
2 batteries
1 seat cover (already split after 1 year)
At least two headlights (but they're those cheap Chevy truck sealed beams)

I've also:
Did the thrust bearing on the steering gearbox trick
Welded a broken seat spring (still holding!)
I've had the rear plate off the diff a couple of times, but it still looks factory fresh inside ( the glyptol paint looks new)..
Annnnnd put a replacement K-301 crate motor in(because it was so cheap in '95 and I figured I'd have the 129 the rest of my life..) The original motor is still running in a friend's older NF ---and never been opened up yet.

If Charlie depended on my 129 to make a living, he'd also realllllly need to start selling Green parts.....

I believe I saw a post on here somewhere showing how to make a rust remover via electrolosis using a battery charger. If anyone knows where I can find this would you please drop me an email. My email address is [email protected]. Thanks much, Dan.

here is my 149 going through electrolysis: 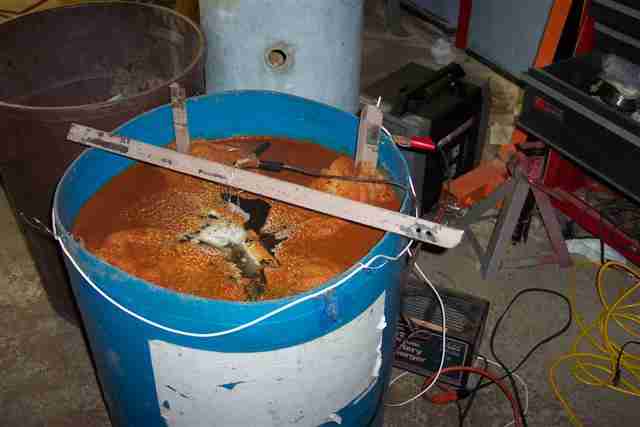 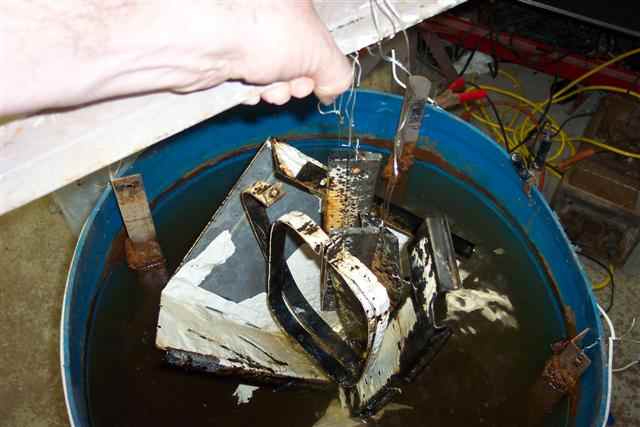 KENDELL - I rebuilt the steering gearbox twice on the 72. The stamped steel race for the top thrust bearing kept pushing up into the steering tube. I dropped a steel spacer 1-1/2" OD x 3/4" ID down the tube & drilled/tapped machine screw threads thru the casting, tube, & spacer to tie everything together and it lasted about 10 years longer the second time. I drilled another hole closer to the center of the steering arm on the left spindle so the tractor turns shorter both ways. Guess the added force is too much for the little ROSS gearboxes. The factory box was worn too many places to fix anymore so I replaced it with a new one two yrs ago. New box cost almost what I paid for the whole tractor/mower back in 1981.
I've also worn out two OEM driveshafts at the rear hole in the shaft where the coupler joins it to the reduction housing pinion. That's not a problem on the lower HP tractors but if You put a K241 to work they will wear. The fact I used normalized O2 tool steel pins on the 2nd shaft probably didn't help the wear situation. And of course the pin had to break at a PD, and put Me on the trailer after less than one round of plowing.

I used to have to replace voltage regulators about every two years until about 1993 or 1994. I "Relocated" it to under the seat like a WF instead of hanging up above the engine with all the heat & vibration. It's a real tight fit under the seat base but the OEM wire harness fits just fine. And the small car battery lasts about 5-7 yrs instead of the year or two the "L" terminal L&G batteries did. I think that's a heat & vibration thing too. My 129 & 982 don't have that problem with the L&G battery under the seat. I have everything electrical fused, the two non-stock headlights, the "Instrument light" for the amp gauge, four rear taillights, two red on the fenders, two amber on the rear frame cover, and a white work light, plus all the wiring for the radio for those "Long Days in the back yard.

I don't run the 72 much when it gets late anymore. If You notice the pic's Kraig posted, the straight pipe has a pretty good BARK to it.

Yep, I think Charlie should start selling green parts, Bet His business would really pick up!

The sealer IH used on all their rough castings does make their equipment almost as pretty on the inside as it is on the outside.

The 72 had about 1/16" wear in the bushings on the ends of the axle carriers. When I'd jack the back of the tractor up I could see the wheels/tires move down as I lifted it, and Up when I lowered it. No wonder the seals leaked! I bought new bushings, they were so thin I was afraid I'd worn into the castings themselves. Then I remembered I had the parts 123, put the new oil seals in it's axle carriers and installed them in the 72. Now the 72 doesn't leak.

Scott:
You've got one of the sub-pages (the trailer one), but the main page ( http://antique-engines.com/electrol.asp ) is the main reference I used when I first set up my bucket.
R

After pushing snow with the 582 with wheel weights, chains, and a rear cantilever weight I decided to fill the rear tires on the 582 to add some extra weight. I removed the wheel weights, jacked up the Tractor, rotated so valve stem was at 12'oclock position and proceeded to pump in 6.5 gallons of used antifreeze solution out of V-16 caterpillar diesel engine. 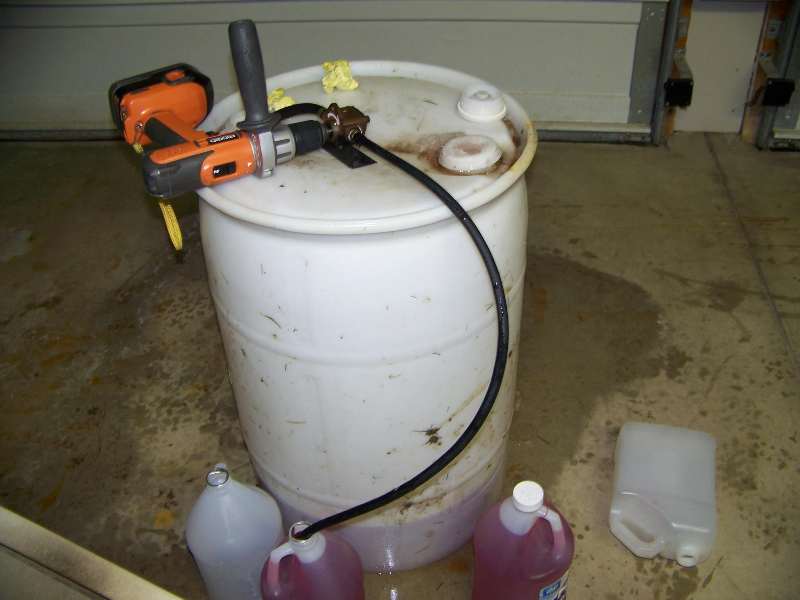 Measured 6.5 gallons out of drum 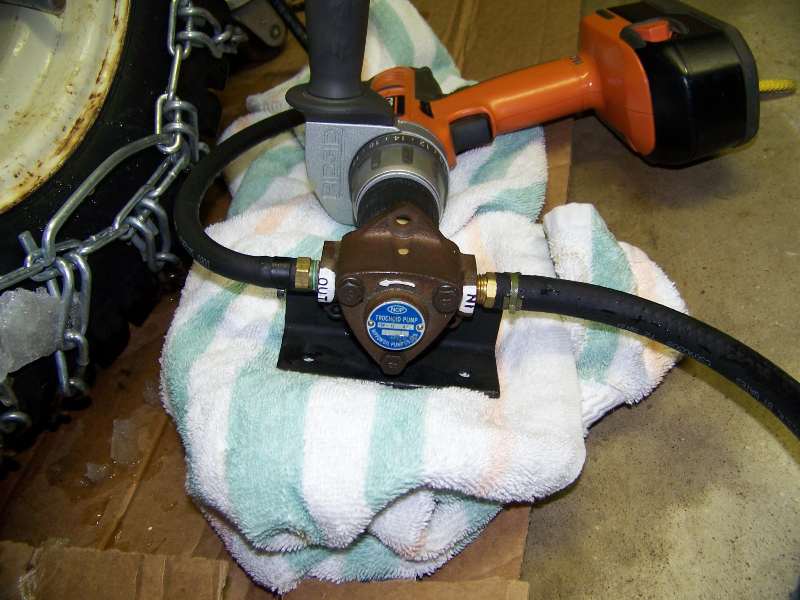 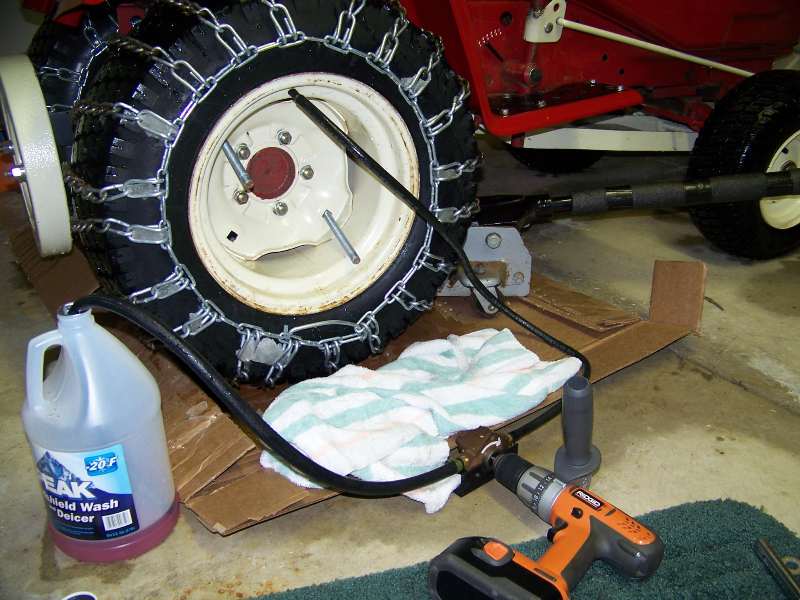 Proceeded to pump in one gallon at a time, it took about 40 seconds for the pump to move a gallon. In between each premeasured gallon, I took the time to allow the air to escape.

After 6.5 gallons, the tires were full to the point where it would run out of the valve stem when the supply hose was removed. Aired them up to 10 psi, and bled them down to 5 psi. During the bleed down process, no liquid came out.
D

When Dad & I replaced the tires on The back of the Super H back in about 1970, 12.4 X 38's, We pumped about 45 gallons of calcium chloride solution with a drill powered rotary vane pump about that size. Between pumping the fluid OUT of the tire on the tractor, busting the old tire off of the rim, mounting the new tire on the rim, and pumping the 45 gal. of fluid back in it took Us a day per tire. We cheated pumping the fluid back in....We raised the 55 gal. drum up in the air with the loader on the M, Only about 500#.

Used antifreeze makes good liquid ballast. Hope You have tubes in Your rear tires. If a tire bead pops off the rim the antifreeze is deadly to pets & animals.
R

Dennis,
I had the tire shop put tubes in the tires this summer in anticipation of getting them filled. The tire shop did not recommend calcium cloride solution, but wanted to put windshield washer fluid in them for about $2.99/gallon. $2.99 x 6.5 x 2 = $38.87 Think the wife will now let me spend the 40 bucks I saved on some other cub part? lol
I just got done pushing our Ohio record snowfall, the ballast seemed to help out but the machine still runs out of traction way before it runs out of engine!!!
D

Even up the playing field a bit?

And Good luck getting to spend that $40 with permission from Your CFO.

My Buddy just had new tires put on one of His farm tractors, from one of the biggest tire shops in Iowa, They put calcium chloride in them. I didn't think ANYBODY did that anymore.
Except for My Super H which has CaCl and rusty rims nothing else I have has or will have CaCl. Iron weights are expensive but not NEAR as expensive as new rims.
T

Got the wheels to spin today. ramming speed into wet heavy snow did it.Also got lots of "plow steer" not to be confused with bump steer. So as Im plowin', dark out,I feel sumthin hit top of my foot. Look down and it's the lift rod lock button-fell out and landed on my shoe. that's gotta be a long shot. Now how does it reattach or does it just jam back in there? I looked up parts dia. but dont see what it attachs to if anything. No 4 in pic: 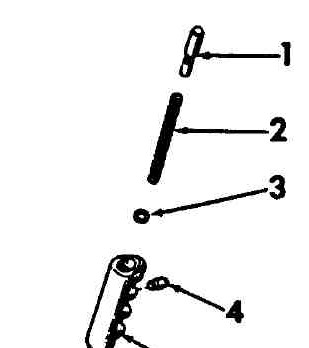 "7 HP GD Cubbies had bushings at the ends of the rear axles, Hydro's & higher HP tractors had needle bearings. I wanted the bearings." 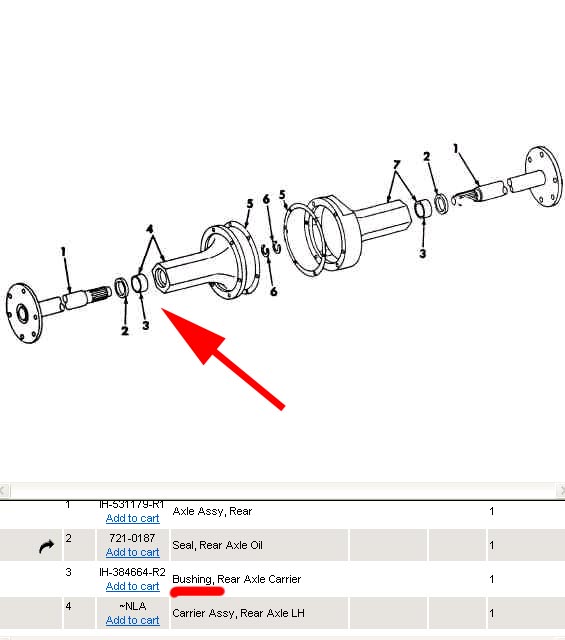 Wow, you just taught a semi-old-guy a new thing!!!!

Well, I finally got those 25x10-12 woolie boogers to spin today... On 2+ inches if ice under about 6 inches of snow.
I'm not sure even chains would have been much good on that stuff.
While pushing snow today I finally had to quit because a roll pin sheared on the lift handle.
I think Don T had that happen on his 149 not too long ago.
Put me out of commision for now, but I'm kind of glad. Been wanting to move the handle to the other side but didn't want to go to the trouble.
Now I'll have a reason.

TOM H.
Sounds like a sweet tractor... 16 hp Quietline geardrive, I'll bet she pulls a plow with ease.
Been looking for a 1200 myself to go along with my 1450.
That way I would have a gear drive and a hydro. that way I could use the same attachments for both tractors.

I wonder what's up with the 6 lug bolt holes in the left axle hub?
D

Finally got some good snow here in SE Indiana. First time I got to use the plow I got a while back... 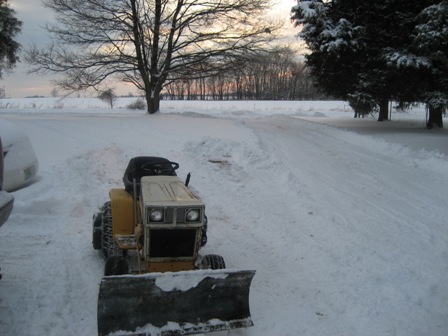 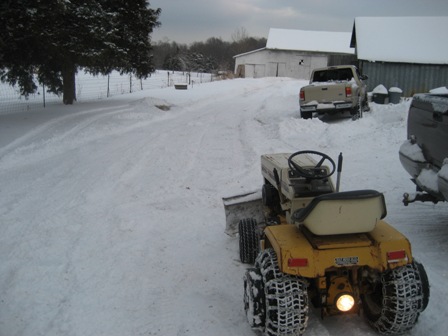 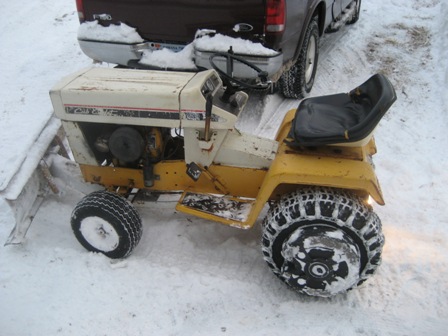 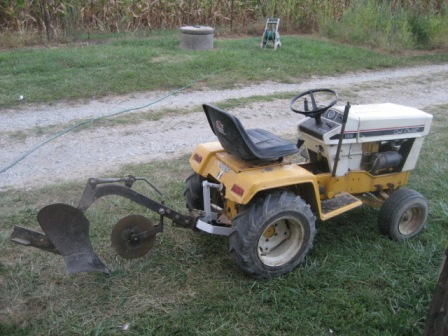 Help! I took apart the crankcase breather assembly on a Kohler KT17 to check it out. After putting it back together and starting the engine, I have oil spraying out of the breather hose that attaches to the carb. I checked the schematic in the manual and I think I have it put together correctly. Any thoughts on what I did wrong? Thanks.
B

I'm wondering what you guys do to prevent the snow chute on the throwers from rotating on their own while blowing snow. Mine turns from the force of the snow and I must keep a hand on it at all times. Thanks for any ideas.

Brian, on my qa 36 i had a little of that and i adjusted the gears that rotate it to be tighter meshing now it moves slightly but it takes a while sorry {no pics) jeff
J

Harry,the handle button threads on the rod hope it didnt break off