I turned the page, but the last link I shared is a GOOD one!

it was a good one Frank! Didn't you have one?
F

I've had several, Mike. Still have 2 here. Don T. and I never got around to dressing one up like a tiger.

At least no Cub Cadets were harmed in the making of those two videos.

Anyone else seen the episode of Junkyard Empire where the dumbass Andy has a perfectly fine #100 destroyed trying to make a lawnmower racer. If the idiot would have watched five seconds worth of video of racing and had at least two functioning brain cells, he would have known a GD CC was the wrong thing to start with. I looked for a forum or email addy to express my opinion of Andy's stupidity but couldn't find any. His last words on that episode were, "Make sure there's NO remains of this thing left before you go home." Wish he had made that comment about his screwed up show.

The 149 project is starting wind down now what with the loader paint job and engine install, to the point where I need to start thinking about exhaust.

I see Charlie has several options available and I'm wondering if the "noise suppression" options are really worth the 'big buck$' reflected in the price's for them.
Comments??

David S.
All I can tellya is, they are a lot quieter and with the welded construction instead of rolled tin, I think they are a great muffler, IMHO.

Wayne:
Thanks for the comments regarding the brass washer used for a bushing for the top on the throttle shaft. A 7/16 brass washer (2 of them)to make a great top bushing.
E

That was a beautiful 122. Liked the initial red vehicle driven as well....
On a plus note, I got the wheel weights on the cc100, finally. Only took 2 years...
M

I’m going to look at a 169 this week. It has several indications that it is a 169 such as the number on the side, the hour meter on the side panel and a Manuel lift (I was hoping for a hydraulic lift). It has the hood from a quiet line on it and no grill. I’m going to check the engine tag when I get there. It should be a K341A? If the tag is gone, what else should I look for to be sure it is a 16 HP motor. The air breather is also off in the pictures he sent.

Michael, the muffler and heat shield are also unique to the 169. The muffler is larger and mounts horizontal rather than at a slightly upward angle. The heat shield has a bend in it that goes up and over the muffler. I would post some photos but am away from my PC today and posting from my phone.

Also ten head bolts instead of nine for the smaller engines.

What is special about 13 fins?

They are better than 12.

The K341A used in the 169 had 13 cooling fins on the jug. The later K341AQS that was used in the 1650 had 12 fins I believe. Both are 16 horse, but the "correct" factory 169 engine would be painted yellow and have 13 fins. If it was a later replacement "crate engine" or one that was sourced from a 1650 and fitted with the starter/generator and the manual PTO would be black. The replacement drop-in engines from Kohler were black. This is why the engine in Dad's 149 is black, not yellow, since we had to replace the original in the early 80's.

Scott - I don't "quite" agree with your info. The 169 "could" have a 12 cooling fin block (Mike Frade, who posted below, can confirm that since he has one). It's been pretty well recognized that Kohler was apparently producing both the 12 and 13 fin blocks during the production of the 169 (circa 1974) and even early production of the 1650. There was no part number or spec number differentiation - it was the luck of the draw on which you got. So "most" 169s got the 13fin, but not all, and most 1650s got a 12 fin, but not all. It's unknown why Kohler produced both the 12 and 13 fin castings at the same time, and eventually dropped the 13 fin casting, except possibly reducing production expense, since the 13 fin casting was thicker.

Mike S - the key factor to verify the K341A 16hp engine is the 10 head bolts, as Charlie mentioned. If you only count 9 it ain't 16hp. Here is a pic of my 169 engine tag. If the 169 you look at still has the tab visible, then it should have the same Model No. K341A and Spec. No. 71154a. Also, my engine is black because I painted it black (I prefer the black contrast, and there used to be a mystic about black engines)
Also, you asked what was special about the 13 fin engine - it's a thicker casting and can be bored out to 4 inches - and pullers really want that block. Otherwise, performance is the same, except there is an assumption the 13 fin cools better/faster, but that's really unknown since it's also a thicker casting. 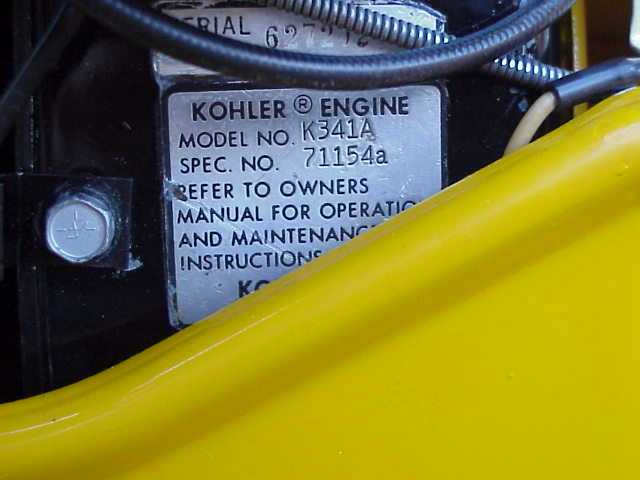 The owner says it runs good but has a wiring problem. Hydro goes forward and reverse. It needs a correct hood, light assembly, seat, and grill. The price is $250-$300. I have enough parts except for the light assembly and decals to put it together. I figure it’s worth the price as long as it has the 16 HP engine, no matter how many fins lol.

I had a good running 169 with hydraulic lift years ago and had to let it go. Huge mistake.

Here's what the muffler and heat shield in a 169 should look like. 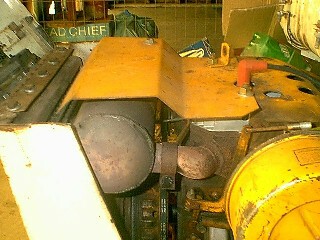 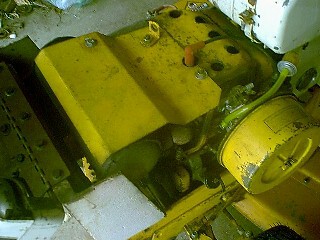