Don't know why it posted twice. But it is the start of a new page. I'm ready for spring.

I gotta say there is nothing better than seat time on the Cub even if the temps are 7 F and wind chills below 0 F . We got another 3" of snow last night and 3 other snows coming our way. Theres just something about seeing the snow fly through the air while your neighbor stands with his shovel watching me. Maybe its the purple carhart bibs ?
B

Is there a place where I can find Illustrated Parts Lists (IPLs) for Cub Cadet Tractors? It's great that we have owner's and service manuals here and on other boards. I would like to get IPLs for my tractors so I don't have to use Partstree which doesn't give a full screen for the illustration or list. It would seem to me that it would be easier to print out pages and have them on file in my garage.
H

Bill "QQ" Jamison - well, I hadn't been able to check back in for awhile so I had to catch up. I got a sense you kinda felt like you were being pounded on for just raising a topic. I didn't mean to do that. I personally don't like to see modifications to the original tractors since most I've seen are hack jobs. That's not to say I have not seen some really expert modifications that I don't have the talent to accomplish. Please also be aware that sometimes I post things to encourage others also post their comments. I really wanted you to realize that if you get a Hydro NF you probably won't have this issue - but then someone went and posted pics of a 123 with a broken roll pin on the rear of drive shaft. So, if as you say you aren't collecting but use yours CC's for work, then I'd definitely concentrate on the WF units.

And now I see we've moved onto slippery front tires, and snow thrower chutes that don't rotate. It's interesting that no one really mentioned the weight on the front end and how it may affect the traction of the front tires. The Quiet Line units changed mid-production to a lower aluminum grill housing that made the units 40# lighter (maybe 45#). That sure had to make the steering easier and change the traction. The 82 series went to an even lighter grill housing, but then many of them also got twin cylinder engines that may weigh more. So, when it comes to front tires and asking input and experience everyone needs to consider what model tractor the tires are being used on, or the experience is coming from.

Now, someone was talking about the chute rotator on a snow thrower. The style that has a cogged wheel can be mis-aligned on the single bolt mount and act like it's jammed when attempting to rotate. Or if it's mounted to high it can slip while attempting to rotate especially in the wind. So, before adding so much grease that you can't see how it works, make sure it's aligned really well.

Bob E - there is a link at the top of the page to the CCC web site where you can see a parts diagram showing many of the items. What I think you really need tho is the actual parts "book". There are a couple different versions. I bought mine about 15 years ago and I don't know if you can still get them from CCC. Used ones do pop up once in awhile. Sometimes it's the only way you can see how things go together - and on the other hand, sometimes the parts pics have show the items out of correct order - it's not perfect, but certainly a great tool for many many situations.
M

And so the weather guessers say we'll probably get a foot of snow overnight. After we're done with it, we'll send the storm on to you Don Tanner! Just to share some seat time. LOL..

Carry the blade about 1/8" and your steering comes back in snow!!!!

V61's don't hurt turf any more or less than any other front tire, provided the operator is an OPERATOR and not merely a "driver"......

I've mowed with them quite a bit and love them, and rear ags for that matter....in fact, they are EASIER on the grass since they don't spin out.
N

Amy, I know what you mean. I get a giggly when the blizzard starts a blowing. My inner child still goes nuts for a snow day. Although I think my neighbors have begun to take me for granted. I have plowed their drives for the fun of it so many times, they seem disappointed and almost grumpy if they have to do it themselves... Especially when mine is all pretty. I have some great photos of the last plow night I'll post soon.

And speaking of pics... I think we all need to see what a cub looks like with those purple Carharts piloting it.
B

The shake down/sea trials continue with the 1650. Not much snow, but enough to keep one of my boys busy a couple of outings today. 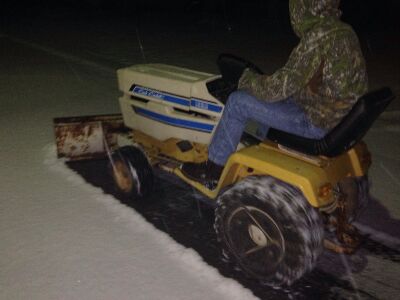 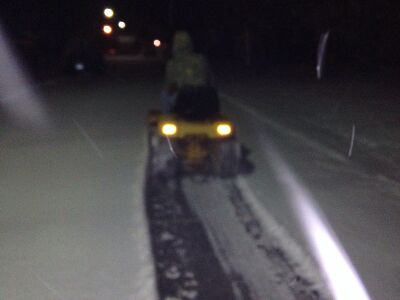 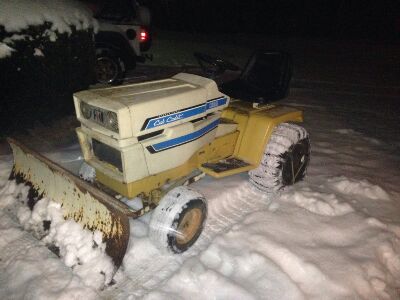 Thanks for sharing ; It started to snow here an hr ago . Not much down yet but they say it will snow all night and all day tomorrow. Hard to say what we will get , but the 450 on the 1512 and my atv and walk behind are gassed up and standing by for me. Might have to take some pictures . I just hope this is not wet snow and it is easy to move.
M

It's 11 degrees here Don! Snow is light and fluffy.. And it's still snowing/blowing, weather guys say we got around 10 - 11 inches. One side of my house is perfectly clear.. the other side has drifts up the side of my cars. I think they are saying it'll end around noon so I'll get out there after that.
D

NIC - Ha-Ha... I agree, we need a pic of Amy in Purple Carhartts, all I've ever seen are the normal brown ones and black.

You have to be careful plowing snow for neighbors. 28-30 yrs ago when all I had, or really needed was the 72 & QA-36 to move snow, I was working nights, driving semi from Moline, IL to Des Moines every night Sunday thru Thursday, then running up & down the Mississippi River doing local delivery on Friday's. When we'd get a measurable snow on a week day except Friday, I'd start with my drive and then do the two neighbor's to the south of me, mostly so the wive's could get in their garages O-K after work. Have to be careful in unfamiliar drives with deeper snow. Anyhow, that went on for 2-3, maybe four weeks one winter and then one Sunday afternoon the neighbor two doors down rang the doorbell. Had a 5 gal. gas can with 2-3 gallons of gas in it to repay me for the gas I'd used cleaning his drive. I thanked him, said it wasn't necessary.

Then he dropped the BOMB SHELL. Unbeknownst to me, he'd just gotten an off-topic green garden tractor with mower & SNOW BLOWER..... I was stealing HIS SEAT TIME!

The next door neighbor and both husband & wife two doors down all worked for JD, his choice of garden tractor was obvious, they had terrific employee discounts. When I went looking for my own CC in '79 after we bought our first house, I could have bought a dozen semi-loads of green tractors 2-3 yrs old with all kinds of attachments. All I wanted was something similar to the 70 of Dad's I'd run for 15 yrs, went to dealers frequently, also farm & estate auctions, watched the want ads daily for almost two years. Bought the first CC I saw!, the 72 in Jan '81.

More crappy P.O. Mods. This on a 1000 parts tractor I picked up 2 years ago. Good news was that it had a nearly new PTO hiding under the muffler!! Think I'll try and salvage it providing the engine is re-buildable. It won't be as nice looking as the 1000 I got from Rick though

Obviously to install a bigger battery.
Don't quite know how I'm gonna fix this short of replacing it 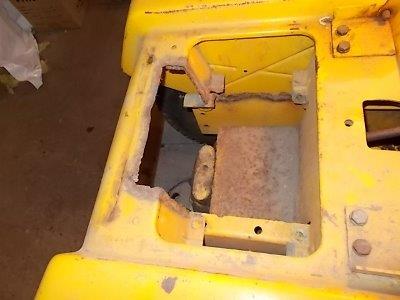 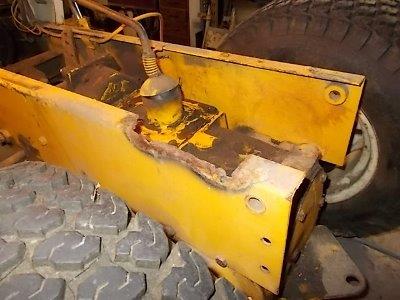 I have no idea what this extra hole and a matching one on the other side were for. 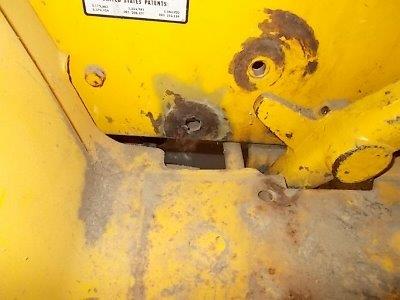 QL frames are readily available. I'd start swapping parts over to a new frame before I tried to save that mess.....

Or trade it on an 82 series

Dave S - yup, to bad about the frame and fenders but as Steve B notes, you can find QL frames. Yours is an earlier version with the bosses for mounting the 3-point so I'd certainly look for one the same. I think you can also find the fenders around as well - heck just look for another good roller and get alot of spare parts (side panels, steering box, front axle and spindles, etc.)

Hmmmm,well I dont know if my purple carharts can drive all by themselves but I sure will give it a try and take pics for ya. Who knows maybe they can be trained to go out there in the cold days and do it for me while I sleep ?

Amy how about a "Selfie"...PWR

Didnt"t see anything from Don T. yet, probabily out plowing. Looked at his weather map and they are still getting snow and high winds. Temp looks like in 20's (F) and a total accumlation of about 10" (25cm). Maybe he hired some Eskemos to help ! ?

Dennis, I'm safe from the wrath of neighbors for now. The one directly next door, his fancy older Toro with P/S and all the goodies is sitting BROKEN in MY SHOP, why? Because the POS craftsman he bought to replace it taking its spot in his garage and couldn't push snow if you through it down a hill.

And the guy across the street, he has a huscavarna that well, is basically just as useless.

My small fleet of Cub's keeps them safe, entertained, and impressed when I remind them how old they are and then show them how much snow I can push.

I love my cubbies.

Nic, I have a few cousins in Neosho & Joplin, & they never get any snow...

No way I`am plowing today. wife was at work and I broke though some big drifts to pick her up. The amount of snow we got more than they are saying. at least 12" and snowing hard here. I will try the 450 in the morning . I`am staying in where it is warm now. Everyone play safe !
You must log in or register to reply here.
Share:
Facebook Twitter Reddit Pinterest Tumblr WhatsApp Email Link