Josh - I don't know about you but I think 4" is nearly perfect to work with a blade, and great to learn with. Guess it does depend on the overall length of run you have to make, but usually won't have to worry about rolling over the top of the blade. Once you start getting to 6" or more than a lot of times you have to rework snow you already moved once. At least that's been my experience.

Yes, Harry is right.
We got around 6" or more of "semi-dry" snow.
With the blade angled, I only plowed with half of the blade. In other words, I used the pointer on the hood to guide me down the edge of the unplowed snow.

The snow had a little moisture in it, so some started sticking to the blade.
Some also came around the forward edge of the blade on the plowed side, and I had to go back and catch that.

I hope this makes sense.
I have tried to plow "wet" snow before, and all it wants to do is stick to the blade and push forward instead of to the side.
This "dry" snow did plow better in second gear. Most of it would roll like a wave off the blade.

I was still playing in first gear when I took this pic. 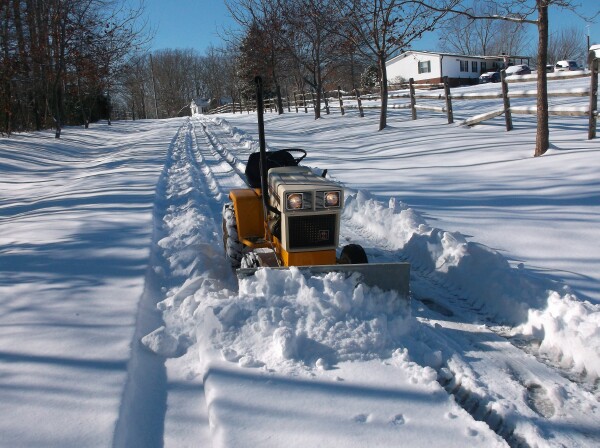 ...There is only one useful gear for plowing snow....3rd!!!!! It is a momentum based activity, and if you up the speed, it rolls off the blade instead of piling in front of it. In deep snow you will only be able to take 1/2 blade widths and it will still spill over/off.......no big deal, plow it all out once leaving trails, then hit it once again to clean up the spills. 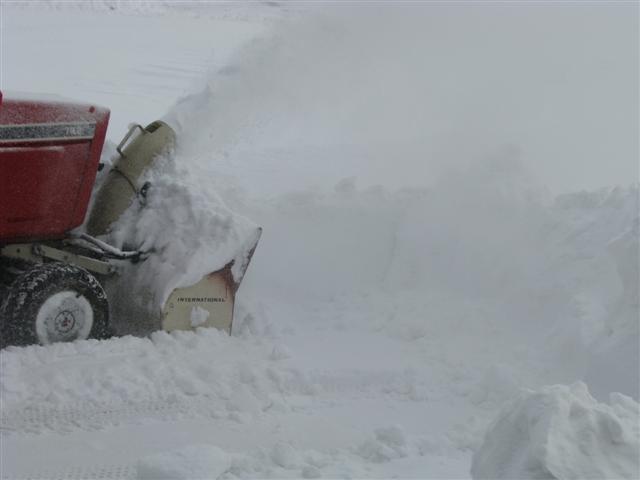 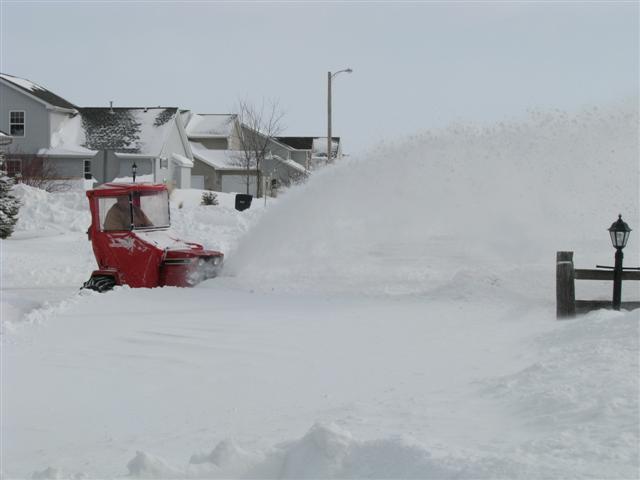 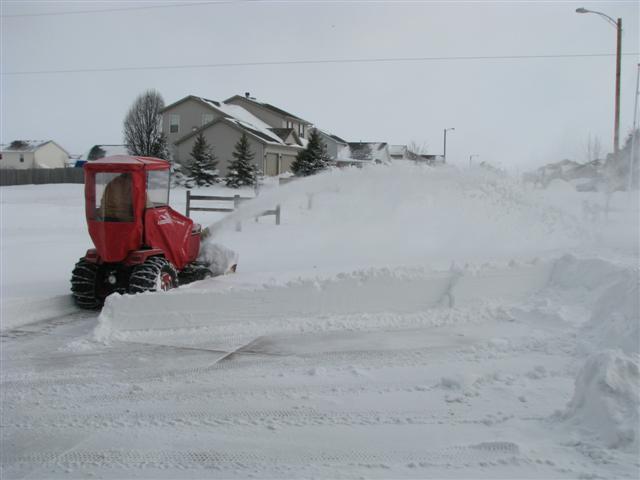 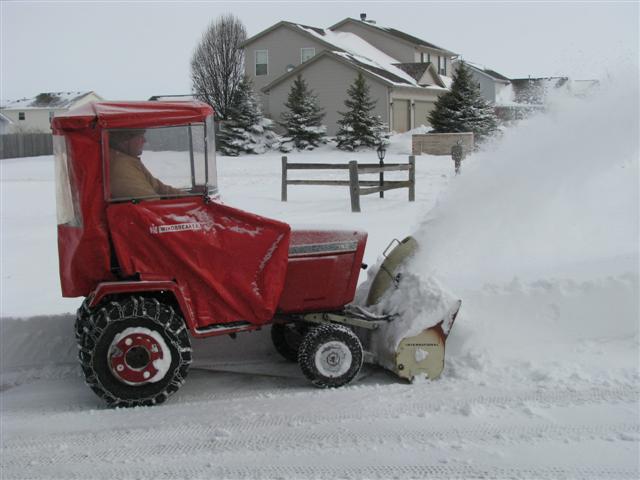 My driveway is gravel, so if I used third gear all my rock would be in the grass!

I haven't even been able to use my blade in about three years. (not much snow around here)

Then there's days when you wish you had loaded up a thrower tractor for the move instead of the blade, especially when it's 37 below, LOL 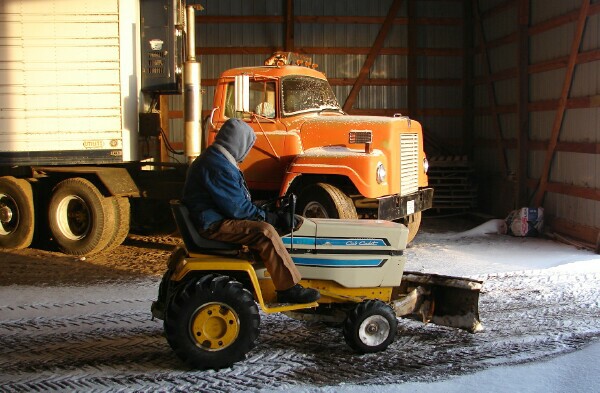 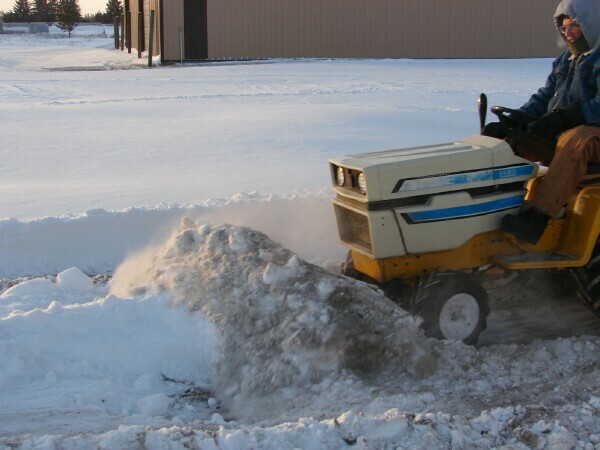 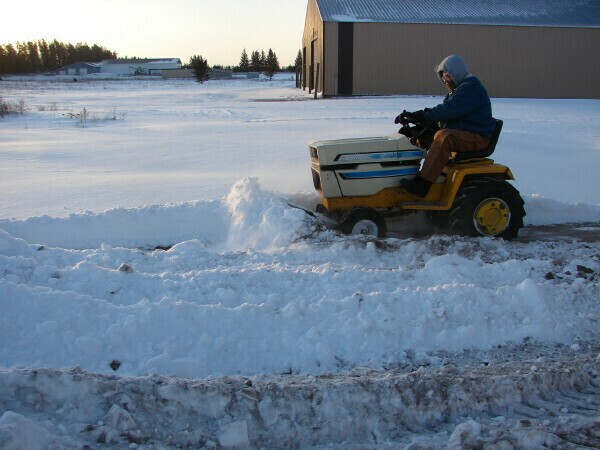 And when you can't get out the door with the blade tractor, you have to give it a little help, just to get started, LOL 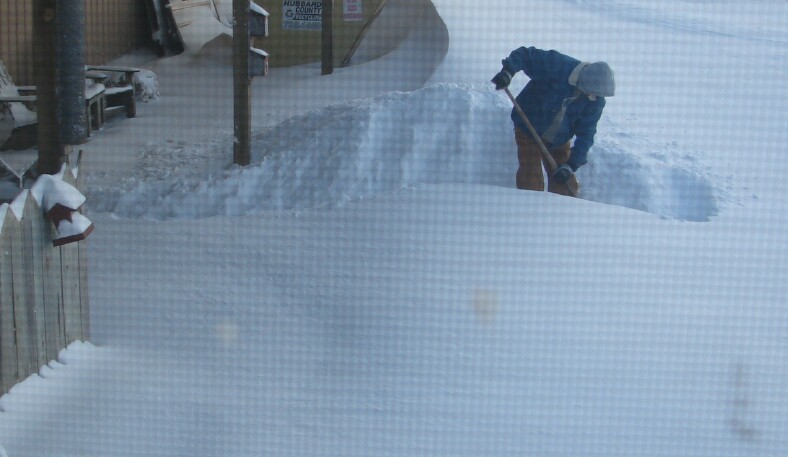 Hi everyone,
The weather guessers said we received 19 inches from last Saturday’s storm. I live next to a field which results in drifts to bare spots so it was hard to tell.
I started with the modified thrower and cleaned up with the second tractor using the power angle plow.
My wife took a couple of pictures of my having fun.
Enjoy, Rich W. 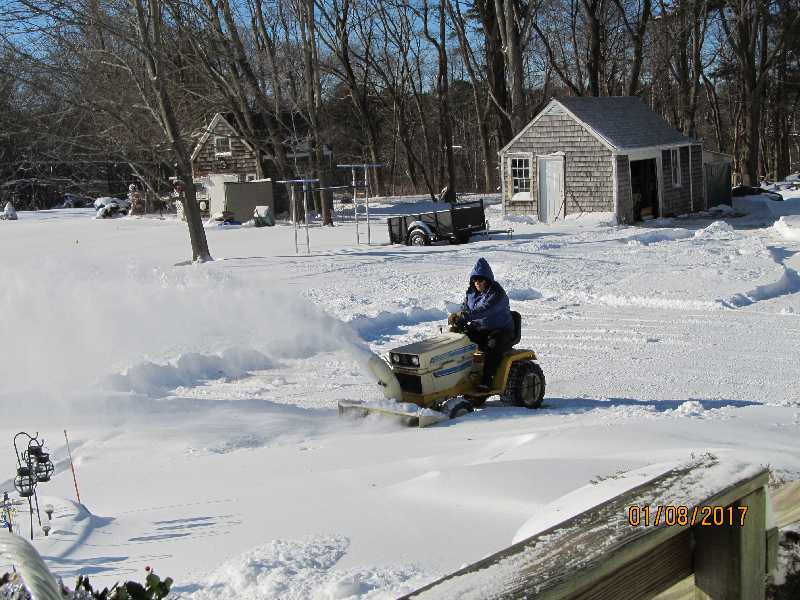 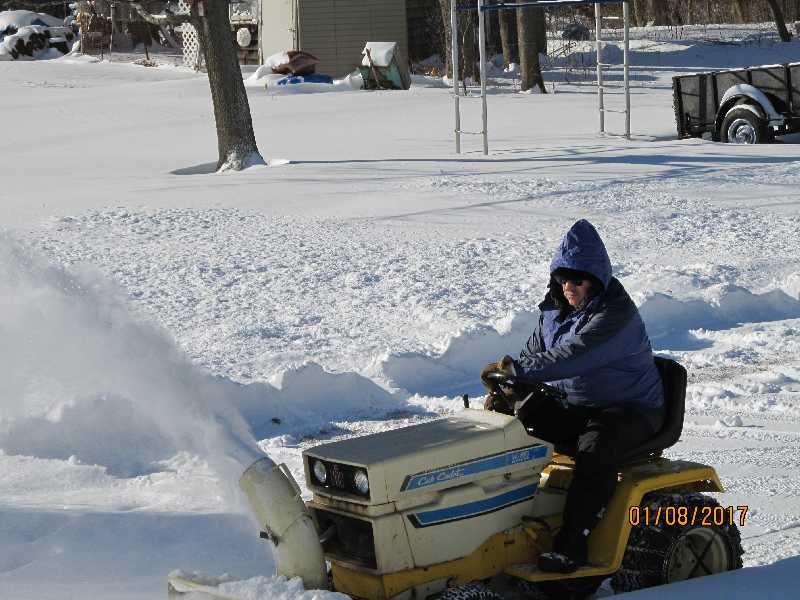 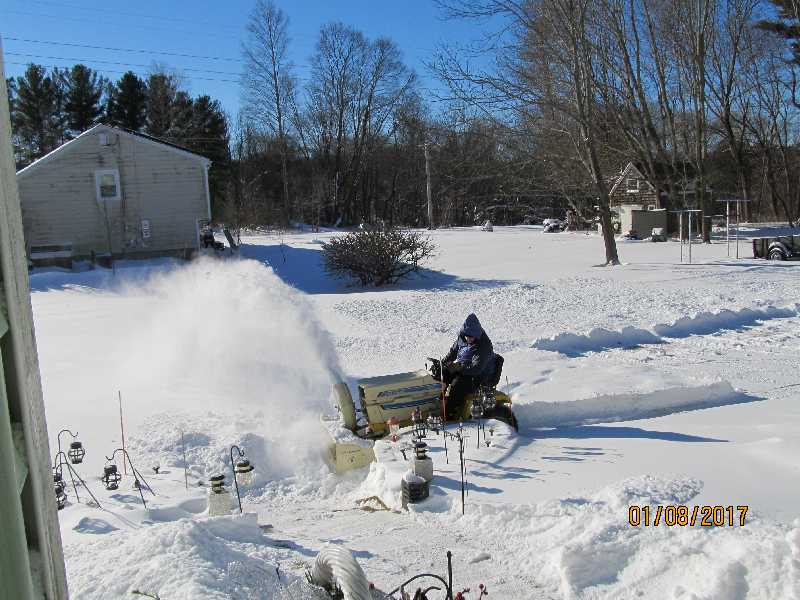 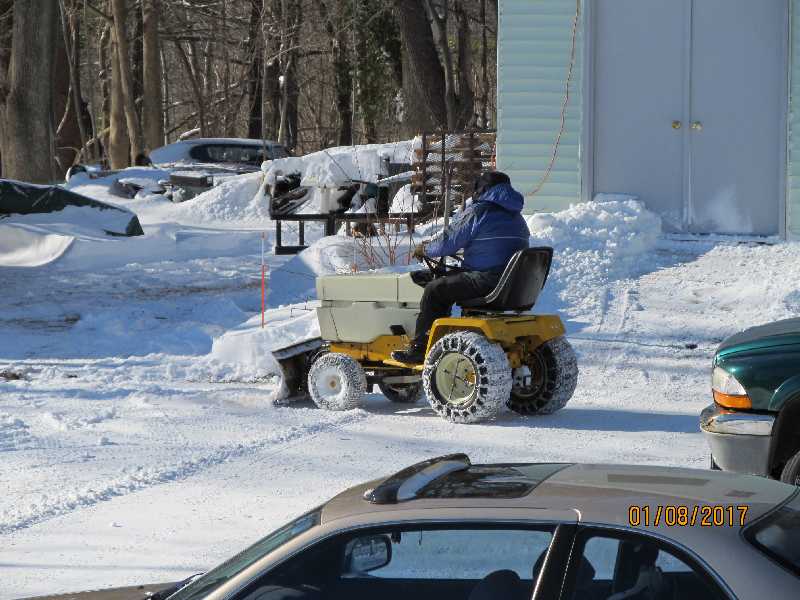 One thing I noticed when cleaning up this time was how much better traction was. Two weeks ago I added 6.5 -7 gallons of washer fluid per tire to the rear of both tractors. I found the thrower pushed into the snow much better and the plow did not spin the tires at all.
I picked up a couple of ammo boxes from HF and am now thinking of bolting them to the hitch. I figure I could add another 50 – 80 pounds in the box. That should make it even better for snow removal.

Harry--I agree! I've bladed everything up to about a foot with the diesel but then it gets hard to move as the pile gets bigger and bigger. That is when I discovered that the 450 blower for the deep snow was the ticket, get it out of the way. The shallow snow is Funner to move with the blade--IMHO. So, that is how I "roll"! Not saying that someone else's method isn't good or even better, just sayin, that's the way it works best for my situation. Love the snow removal pics guys--it's making me a little jealous!!!

You guys are making us shiver!!!! We've had the rain and then ice only it's stayed just warm enough to keep the roads pretty clear. Ian's wanting to use his 582 with the blade so I know he wants snow.
D

Hey folks, is there a cheap/easy way to space out the rear wheels on my 124? I know there are 1/4" spacers & the stock lug bolts look to have enough thread for that but I was thinking more like 1". Does it have to be a one piece thing for max. contact or can you use pipe spacers w/longer bolts? Thanks in advance for the help.

David, I used 2 washers on each lug on my 1450 or 1200 with my 23-10.5-12 Tru Powers ag tires just for clearance. They rubbed the inside fenders, but for 1 inch, I'm not sure. My washer usage is about 1/4-5/16 at most. A solid spacer would probably be best, when you get too long, you have to worry about torquing the lugs off. I don't know what length you'd have to worry about that though.
M 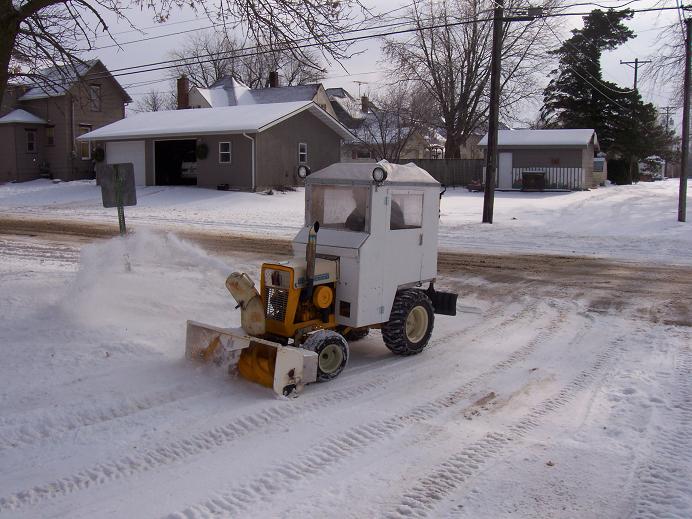 Get wheels for a super there is more offset to move the rims away from the body. 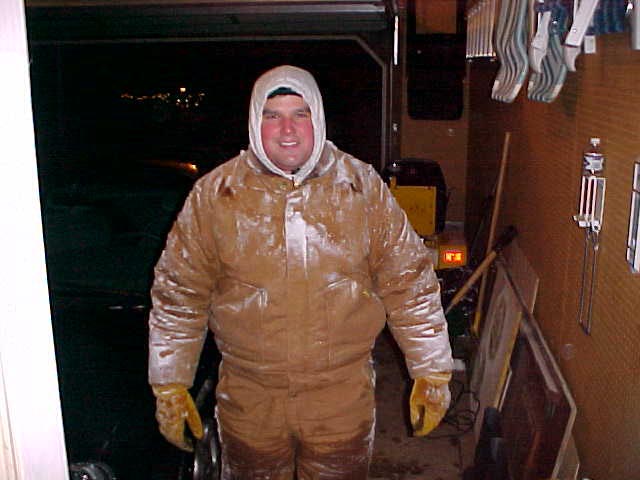 Mike M. My Tru Powers are on rims from a 1541, they rubbed with the old turfs too. I knew the offset was different but I had thought it was inward toward the frame, not outward away from the frame. I thought about getting a set of 2 inch spacers from Aaron and putting on the 782 and trying to match Charlie's wide track black beauty.
You must log in or register to reply here.
Share:
Facebook Twitter Reddit Pinterest Tumblr WhatsApp Email Link