Steve B: Interesting Post, I think you've all given us some food for thought.

Jonathan ,i sent you some info.
N

So I'm swapping out the pump on my 782 to a better working one. I know this is a debated topic, but what's the tip-top best gasket to use when bolting it back together? I need to make an order from the boxes above...
T

Wayne S- What? Those little ol' balancing gears? Yes, gone. They will make a nice set of paper weights.
I can't quite seem to get my pictures small enough to upload here, so I put them up on flikr if anyone is interested:
http://www.flickr.com/photos/terry_mc-sharephotos/sets/72157632798930587/
H

Terry Mc - geez, had a look at your 147, which just happens to be one of my most un-favorite Hydros, and you actually got a pretty decent looking machine. I'm just not much of a fan of the electric lift, which you'll have to investigate once you have your engine back together. Overall I don't see any rust on your tractor except on the hood support plate next to the battery box, and the cross bar for the battery holder. It looks to me like your unit just needs a good wash and wax job along with the engine, and she'll be a nice running and looking tractor.

Jonathan - geez I'm the wrong guy to ask when it comes to the internals of an engine. I know the parts but because of the tollerances and other details that I could never become expert or exact at, I've always left that to the other guys. I'm sure glad David C popped in with some details for ya. He and I have to get together a little more often so I can really learn something.

David C - thanks for your great info.

Steve, Mr. Plow - geez, I really like your info, your theory and your challenge. Makes a whole lot a sense to me. As I've said before I got nothing against the GD tractors, it's just I love Hydros, especially the infinitely variable speed control. For awhile I thought just because my very first CC was a 1450 I was biased toward that style/type of unit, but as it ends up when everything is set up well in good condition (Iso-parts and hydro trunion) its probably one of the best overall units you could get, and the other best being the 149, maybe more so because of the solid mount engine.
B

Quick question: For a narrow frame tractor such as my 126, what color should the sleeve hitch (U shaped bracket to plow) be, yellow or white?
W

It looks like you have a very nice unit there. If you haven't already it should clean up nicely. The fender pan looks like it has no bends or dents. It does appear you have some seal issues meaning the pump may need to come out and disassembled. The axle seals could be contributing as well. The good news is the paint is probably very nice under all of that oil/grease/dirt.

Terry M. - just wanted to say that I too am going thru a recently acquired 147 so anxious to watch/hear how yours is coming along. If it helps, I just rebuilt the electric lift on mine so just maybe I can chime in when you start messing with it. And, my balance gears are also serving as paperweights. Good luck and hope you enjoy the challenge as much as I have.
T

Bill "J",
White/cream color. The "U" shape bracket was made by Brinly not IH.
B

No more crying about no snow here in Michigan. 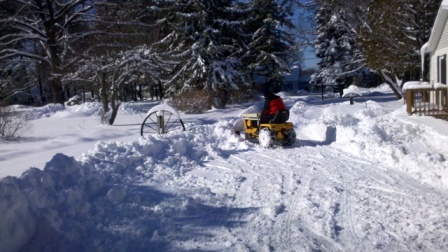 Dad and I were very pleased with how much snow the 109 would move. Not bad at all for a CC that we first got for parts.
B

Terry M - thanks for the info!

All this GD vs Hydro talk - makes my head hurt...

I remember back in the day, my Grandparents had a Sears Suburban SS-14 garden tractor on their farm. That tractor did a lot of chores, mowing pulling a sled with kids along for the ride, fence wire and hay wagons for feeding. It was used by EVERYONE and if it could be abused, it was. We all thought the Sears tractor was a "cheap" tractor - much the way we all look at box store tractors. In hind sight, I can say the old Sears was as tough as any tractor I've used.

I said that to say this - NF vs WF vs Hydro vs GD vs IH vs any other old iron garden tractor. I feel they were and are all good - especially compared to the buffet of new junk we have to pick from today.

I will use parts off the 122 to get the 126 going - not because one is better than the other, I just like the zig-zag style hood and one piece seat pan better.

I say if a particular model IH (or other color tractor) floats your boat, you got a piece of quality old iron tractor and it's all good.

Cub Cadet content - looking at the deck that came with the 122, it is a 42 inch deck as I measured it from outside blade tip to tip. It has a cast iron nose piece and cast iron ends on the deck. It's interesting that the spindles are mounted to the cast iron vs sheet metal. Don't know how these decks cut, but that cast iron mounted spindle has got to be brush cutter strong. No distorting cast iron vs sheet metal if you hit a root with the blade or spindle!

Quick question - would the frames be identical between the 122 and 126 tractors? Reason I ask is that the sheet metal hump in front of the seat on my 126 has been pried and bent a little around the creeper area as it looks like someone made a little more room to service the drive shaft on it. The frame on the 122 is in perfect shape - so I was thinking about maybe a swap to the 126. I just gotta believe IH changed something - if nothing else, some mounting holes, etc.

Bill, the 122 frame does not have the QA mounts at the front. There may be other differences.
D

DON T. - Sorry, but not taking you up on your offer. Sounds like you want to hook bumper-to-bumper or drawbar to drawbar. That's one of the stupidest things and very dangerous to do. Great way to break parts too... on trucks, tractors, and PEOPLE. Plus I'd hate to pull your 149 or your Ram around backwards and post pic's of it here.

STEVE B. - As you all too well know, running across a field plowing, disking, whatever, conditions change, ground gets wetter, drier, more or less clay, hills, etc. The Torque-Amplifier IH developed was a HUGE productivity booster back in '54 in the Super M-TA's and was still used in the 3X88 series thirty years later. Comparing your hydro-vs-GD to a tractor with T/A is giving the GD a great advantage, but I think your conclusion is correct, when the draft load is less you can increase speed & productivity to the maximum with the hydro. But comparing a H186 to a 1086 gives a great advantage to the GD with an additional 25 HP, a 986-vs-H186 would be an even match. And the hydro would win.

But here's another thing to consider, How often do we really run our CC's as hard as they will run? Yes, depends on what your doing, blowing snow, yes, WAY too much HP is barely enough. Maybe even pushing snow with a blade, but mowing grass? Not sure about others but I almost NEVER run wide open mowing due to tall grass or two wide of swath. Even with the 982 I seldom mow faster than 3 MPH. The mower leaves all kinds of streaks in the yard, piles of clippings, etc. You reach a point where the implement is the limiting factor in how fast you can do something, NOT the tractor running the implement, and whether it's 10 or 16 HP, or hydro or GD.

Back when Dad was buying 7 HP GD CC's because they were MUCH less expensive than a large HP or hydro CC, yes, I ran them wide open a L-O-T, and every three years they needed rebuilding. The amount of time it took to mow the yards really didn't make that much difference, as long as we were done with fieldwork. And spending $1000+ on a lawn mower as opposed to $1500 for a larger field work tractor or implement was NOT going to happen. Spending $500-$600 on a 7 HP GD CC could be fit into the budget. The larger engines, 10, 12 HP ran for decades pulling the same mowers because they only ran at 50% or so of maximum load. And with the cost of rebuilds now days, why would you run them that hard? At least for me, whether I take 2 or 5 hours to mow really doesn't make that much difference anymore. Not like 30+ yrs ago when I got done plowing one field I still had 3-4 more fields to plow, or we could get on with planting, or when I got done mowing the yard I had hay to mow or bale.

Back spring of '80 towards the end of the big IH strike, couple supervisors were taking tractors out to the west yard to park them. One trip they had a 686 and H86, when they got out in the yard they paired them off to see which could run the length of the yard fastest. I'd like to say which tractor won but honestly I never found out. The 686 could launch in low 5th then shift the T/A up. The 686 would sit wide open and accelerate at full engine speed, I would think the hydro would have won but don't know for sure.

Like I said about four posts ago, If I only had one CC, it'd be a GD, and if I had two, I'd have one of each, because 90% of what we ALL do with CC's can be done just as well with a GD as a hydro. And there are just as many things a Hydro is not well suited for as there are where they are the right tool for the job.
P

Bill, in addition to what Kraig said, if I recall correctly, the 126 frame has predrilled holes for mounting a hydraulic lift. I know the 122 frame doesn't have them.

Ya know, I just thought of something ready Denny's post that my Grandpa used to say all the time!

He runs off at the mouth like a fizzicked woodpecker!

I very much like Dennis Frisk's posts. If they could be rolled-up in a book, I'd buy it!!!

Fun discussions with good points on all sides. If I wern't so addicted to hyd. lift and power steering I'd probably run a few more GD's, because they are really nice for some applications.

I hear you Tom. I don't think this would even be discussed if every cub owner had at least one of each. I prefer hydros for certain chores but GDs would do them; I prefer GDs for certain chores that the hydros could handle. And then there are the "hybrid" cubs like the 168 that are results of cub knowledge of what will work and what doesn't. I really like owning both and HAVE to like working on both.

I guess it gives us something to talk about when we're running low of topics.