Matt, My tractor had a throwout bearing with a tube bushing behind it. They were two pieces butted up against each other on the shaft. The new design incorporates both pieces in one part. I wouldn’t expect it to function any differently than what I had before other than there isn’t an interface between the two to dish out like the old bushing.

I agree that the IPL is incorrect. The IH Service Manual shows the correct order of assembly.

Greg L.
Google beadlock and you will be enlightened.

Here is a pic of the front of the 703-0600,it has no shielding on the front like the other 941-3056 bearing.
The older style 2 piece looks like the early type drive shaft coupler on the trans end. 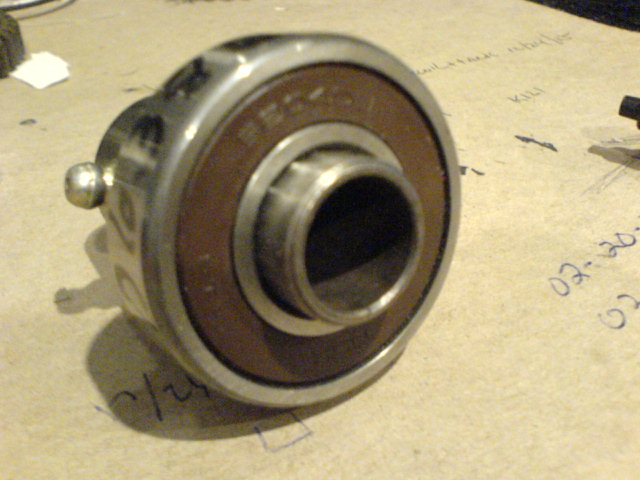 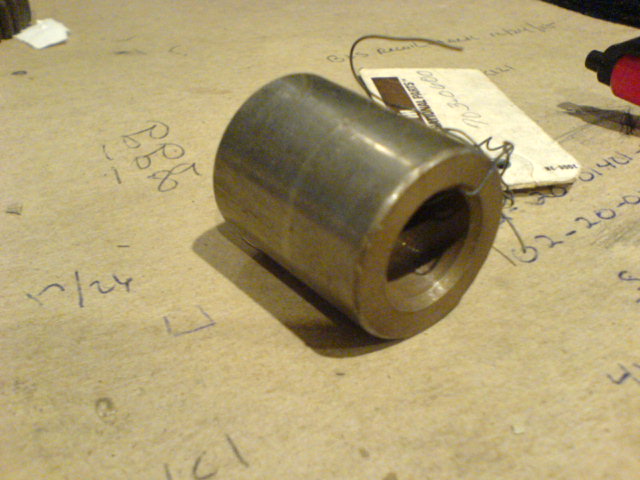 Thanks. Information like this is why I come here.

And FWIW, the original spacer on your current clutch probably wouldn't have worn if the previous owner had bothered to grease it regularly

Matt, my youngest brother who is a threat to all things mechanical had the tractor for a few years. He did NO maintenance on this machine. I'm sure the zerks never saw grease. Fortunately the linkage to the throwout lever broke and he stopped using the tractor. It wasn't running when I got it and it has been a project bringing it back to proper maintenance.

What trashed the bushing is the T/O bearing was completely locked up and he kept right on using the tractor. I don't think I could have taken the awful noise it must have made as it ground away against the T/O lever. That locked bearing must have beat up the end of the bushing every time he stepped on the pedal. I guess not everyone thinks to see what is wrong when a machine starts making noise. It was painful to see the condition it was in when I got it back.

The tractor was given to me by a couple in the neighborhood where I grew up in Illinois. They had an only child who died in a car wreck when he was in his 20's. They treated my middle brother and I like sons. We maintained their 2 acre property for many years in junior high, high school and during breaks when I was in college. I practically grew up on this 1000 and I think of them every time I am on it. It's a joy to use and work on.

I started using the tractor in about 1987 when it was 10 years old. The pin behind the compression spring on the driveshaft snapped once and it was repaired by a local shop. They didn't replace any other parts. That and tune-ups are all that were done to it since I started using it. I maintained the tractor and made sure the oil was changed and the zerks were greased. My younger brother certainly didn't do any maintenance but then again don't get me started...

Fast-forward to the end of July 2013. Me, my wife and sons moved sold our home in town and moved up into the mountains above Santa Cruz, CA into a house on 2 acres. I had some things in Illinois that needed to be shipped out. The load was underweight so the tractor and 44" deck rode free so I had it sent west. That month I picked up a basket case 1450, another 44" deck, a set of wheel weights, a rear lift, a #2 tiller and a Brinley box scraper. I wasn't looking for a second tractor. I checked craigslist on a whim and found this deal. CCs are rare in California so I can't believe I found it. I took it down to the frame and did what I call a mechanical preservation. It needs paint desperately but is functional.

This turned into a longer post than I intended. If you're still reading thanks for following. Every time I get on one of those tractors I feel like I'm 16 again. The 1000 really brings back memories. I think of Bob and Sherry Loncar often. Bob passed away on July 4, 2012. Sherry is not doing well. Another neighbor, Al Novak, welded the seat on the springs. I'll never change it. I was a pall bearer at his funeral. The positive battery cable that I replaced in high school is still on it. That tractor really brings back memories.

My boys are 5 and 7 and talk about who will drive which tractor when they are old enough. They way these things are built they'll probably have to decide which will take the 1000 and 1450 when I'm gone. I'm glad to have them at my house. I like to think the 1000 is enjoying a second life on the west coast.
F

Thanks for the great story, Bob!

Bob, I second what Frank wrote.

I am thinking of building a double brake pedal assembly on the right side for individual brakes to help with the spinning tires on shear ice and when I'm plowing. Any body think this is a bad idea or any ideas how to build it.
If so send me an email
W

Bob, thank you for the heart touching story. It made my day, hearing about the people involved and the Cub Cadets. I hope more of the older models will be kept alive. You don't see as many of them advertised as we used to see.
B

Thanks for the positive responses.

I grew up IH and I have always been IH. My boys are 5 and 7 and already have the fever.

If you think there aren't many for sale in Indiana you should try finding Cub Cadets in California. I have only seen a few in the last two years and they go for top dollar. Most cases it would be cheaper to buy them in the Midwest and have them shipped out.

Once I saw a package deal on about 6 tractors for $1000. The collection included a 169 that looked like it had the correct muffler and air cleaner and an Original with a loader. If I came home with more Cub Cadets I would have to take advantage of the nice weather because my wife would make me sleep outside. I e-mailed the seller and he collected the tractors over many years. I am still kicking myself for not getting that deal.
F

Carbon buildup - the number one killer of an otherwise properly maintained Kohler engine.

Bob E - thanks for sharing your super great stories. I think Frank C's (Spud-picker) post is directed to you. Can you post some pics so we can see your units. I thought my 1450 was part of me after using it for 14 years, and I cried when I sold it before I moved out here to the left coast (but I had to keep my 169 and take all the heat on here cause it's a trailer queen). In your case it's a lot longer than 14 years so I suppose it's more than a part of you - it's more like a body organ and you can't function without it.

Many of us have had those deals we pass up and kick ourselves for, but most of us like to sleep inside too. When I lived in CT I had a deck off the back of my house with just enough room height underneath to stand slightly bent over. It was a good size and I could hide about 10 cubs under there. My wife was on the deck a lot but rarely went in the back yard. She knew I had some under there but never knew when I moved them in and out, changed them up. She knew I was always working on 1 or 2 in the garage, but out of site was kinda out of mind. I actually always wanted more space cause I had to pass us some good deals to. This was mostly back before the internet and it was really really hard to find these units then. You had to have a subscription to ever newspaper in your state and surrounding states too. I actually drove to NY and Pa for tractors. I knew they were out there but really thought most people weren't selling.

Brady B - I don't see any comments yet to your question about a possible double brake pedal, even tho you asked for e-mail replies. But that wouldn't share the possibility with all of us. I believe there has been some discussion before and even others that have done it. It's seems workable to me but I'm not one that could advise you. I do think you need to provide more information. You didn't mention the model you're thinking of doing this to, and whether you have dual disc brakes or a single internal wet brake.

Copy the SGT tractor design, or better yet, buy a set off of a junked out SGT frame and add them on.

I made some for my 782 years ago. Here's one picture. There are a few more on my website in my sig line. 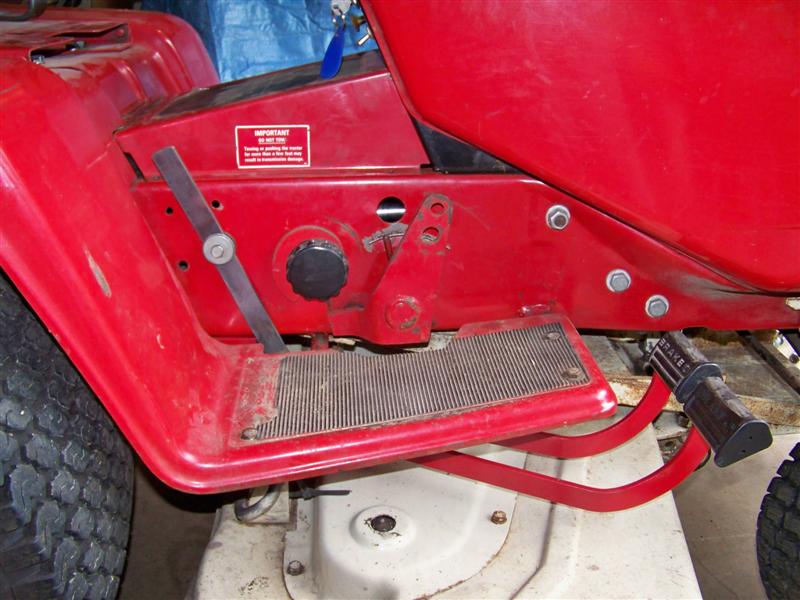 Thanks for the clarification Harry. I have pictures of the tractors on another forum. I don't know if it is legal to post links here. I'll snap some pictures this weekend, but you probably won't like what you see in the background. I'm looking at the weather where most of you are and after coming in from the near 80° sunny weather you probably don't want to see that.

I got on that 1000 after many years and it was just like riding a bike. My dad had a 108 and between the two gear drives are in my blood. The 1450 I picked up in 2014 was my first hydro. I still am not used to it. After all the years of gear drives I don't know if I ever will be used to it.

I took the heads off both engines when I got them back in 2014. There was almost no carbon buildup. I haven't worked them that hard so I don't expect to see anything if I were to pull the heads now.

My wife watches our budget like a hawk so any CC expenditures are on the radar. It aint cheap out here in Cali so every penny counts. Another hobby I have is vintage and modern chainsaws. I pick up dead saws, rebuild them and sell them. I picked up quite a few this winter and sold some the last few months. That $$$ is earmarked for the Cubs. It's kind of unusual because a lot of times I'll sell some saws and see an old McCulloch that's BIG and complete and my fund goes toward it. They come and go.

I want to get the cubs fixed and my wife wants a garden tilled. Win-win as far as I'm concerned. She gets her garden and I get some seat time. We'll have the Cubs ready for work for many years.

BTW I sleep outside plenty. I enjoy 4x4 camping trips in the desert exploring ghost towns and abandoned mines. Sleeping outside is no fun when you are at home. That CC collection was tempting but I knew I would run out of space and cash to take care of them properly.
P

I have a 1450 and would like to reproduce the decals for the side panels, and the center console. Does anyone have digital files so these can be printed at Costco?

I would just order the complete set from cc specialties at the top of the page!