Rich P,
His profile lists Boardman, Ohio. I have no idea if that's near Youngstown.
I was talking about the NP thing. I was listening for an Original putting nearby on Christmas Eve, just in case...

Matt G,
Hate to point out the obvious too, grin
There are and I have seen 2 length WF handles.

Ken,
I think there are 2 reasons for rear steering a forklift. One is for maneuverability. You have a much tighter turning radius on the forks with the steering in the back. The other reason would be the cost of the rig. If you look at a conventional warehouse style forklift, you will see that the steering axle is quite small. The only thing it needs to hold up is the counter weight. Which weighs much less than the full load.

What I like to do is look at other rigs to see how they are designed. For example, if you look at loaders you will notice the big boys are articulated, the medium boys are front steering, and the little boys are one armed

One final thought. There are a few home made articulated cubs out there. I was thinking, other than plowing what good are they? Then I thought a loader on an articulated cub would be the rig that gives you the best of both worlds!
T

Charlie/Matt,
Then again you could put on the creeper handle extention as used on the 102-122's

Tom,
I was gonna mention that, but thought better of it, grin 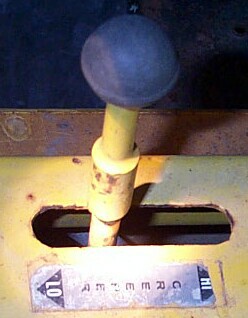 Yes, that is obvious, <font size="-2">I could even say too obvious to mention</font>

Bad news: I can't get them loose. Somehow while fooling around with that adjusting bolt I screwed something up, and now no matter what position the bolt (or peddle) is, the brakes are engaged.

Since I'm going to drain the old tranny fluid anyway (slightly burnt smell, medium viscosity, dark amber), I will likely take the whole brake assembally apart as it says in the service manual, BUT, for now, I would like to at least be able to move the thing around. Is there any quick fix for locked up internal brakes?

As for lighting, I have two 35s up front and I threw away the packaging for the 'beehive' light in the back. Can't be more than 5. I'll go out and get some 15As.
D

Justin- you asked (without punctuation):

"Dave- what would you gain in putting a creeper on a hydro? The live PTO- that would be useful."

There's only ONE thing that a creeper would do for a hydro- it'd make it easier to start on a cold day (by virtue of the lower cranking-torque from the cold hydro fluid). Other than that, it'd be a total gag. Matter of fact, now that you've mentioned it, I think I'll make and mount a shift lever on Loader-Mutt just to make people ask questions! :-}

The live PTO... it'd be useful, but only if you were to make implements for it. From what I understand, the PTO found on IHCCs is essentially a transplant of the F-Cub, where there were actually agri-attachments used... doesn't seem like any of those are applicable to the Garden Tractor's realm. On a hydro, it'd be somewhat of a PITA to rig something that was 'live', just because of how everything fits together back there, but that doesn't mean it can't be done... I actually have an idea for that, as well as ideas for a few implements that might use it, however, it'd be easier and faster for me to build self-powered implements. I'd hafta be WAY too bored to take that task on, but if I did, I'm sure a few would be fascinated by the result.
D

Ken, Steve, etc- I like the payloader concept... but if I were to do it, I'd totally reconfigure the hood, fuel tank, etc., so that the sit-height was much lower, and I'd end up changing the axle caster (the opposite direction) so it doesn't steer jerky (like Deer Jerky?). But I'd still end up with a more serious front (now rear) axle, and a serious counterweight. Side-stability could be aided with dual wheels, but not much better. The unfortunate aspect of the payloader-layout, is that you LOOSE the best counterweights- wheel weights, fluid, that big iron transaxle, and my lard-arse holding it down... all on the wrong end. What USED to be 750lbs 36" from the fulcrum, now becomes 200lbs (engine, grille, and a few weights) 20" from the fulcrum.

But I'd still be limited by the axles- now the REAR axle (which is under shear and torque)... is carrying the load, and the front axle, although loaded lighter, gets pounded against the ground when rolling down the street with a counterweight. It's a catch-22. In any realm, the lifting capacity and stability of the Cub Cadet is limited by the fact that it's a small machine... it's got a small peripheral footprint, and doesn't weigh much, so lifting anything very high puts it in a challenge-for-stability... single or double-arm, it ain't very big... even the F-Cub (even in one-arm config) suffers similar bane, but it had much more mass and footprint to enhance stability... and all the weight in the world, and the biggest footprint, will still yield a loader that can become unstable. I could put my buddy's D420 on it's head just as easy as Loader-Mutt, perhaps easier, 'cause it's articulated- the load and footprint (hence load stability) changes with steering angle... steer it wrong with a heavy bucket of weet dirt, and it'll flop like a landlocked catfish.

At the time, my biggest concern was economics and time (cheap, fast, good- pick any two!). I wanted to get something together that I could use for little projects around the lot, and a couple-hundred pounds' capacity was fine. To solve the sink-in and hole-bumping issues, I went to oversized tires, and to make it convenient to operate, I went power-steering and full-foot control.

Next time, I'll build a payloader, use TWO IHCC rears, articulate the bugger, heck, mebbie I'll yank the Volvo from the diesel-project and put it in the Payloader, and put a Wisconsin V4 in the diesel-project... or mebbie I should just buy a payloader and save myself the effort... 'course... a Payloader won't fit in the places I want to go, it'll sink in where I want to float, and it'll cost a whole lot more'n I've got invested in Loader-Mutt...

Hey Dave K2,
I've got to add my 3 cents on the,
"There's only ONE thing that a creeper would do for a hydro- it'd make it easier to start on a cold day (by virtue of the lower cranking-torque from the cold hydro fluid)."

BULL HOCKEY!!!!!!
Keep'um tuned, add MMO and run'um till they drop and run'um some more! They can take it.

Terry, Front-mount loaders main attraction on a small tractor is that they are one more useful attachment. As long as the operator realizes his load is balanced near the apex of a triangular planform due to the center-piveted front axle and does not try slope or fast sharp turn manuvers with it, then they are OK. Rear mounted loaders/forklifts inherently become more stable when loaded, front mounted become more unstable when they are loaded because of the way the CG moves when more load is applied over the triangle.

Here is an excellent example of an articulated cub with loader that (I think) Kraig sent to me.
Note that this could have been designed for the loader the other way around and it would work just as well. That is the direction my paper design is going. 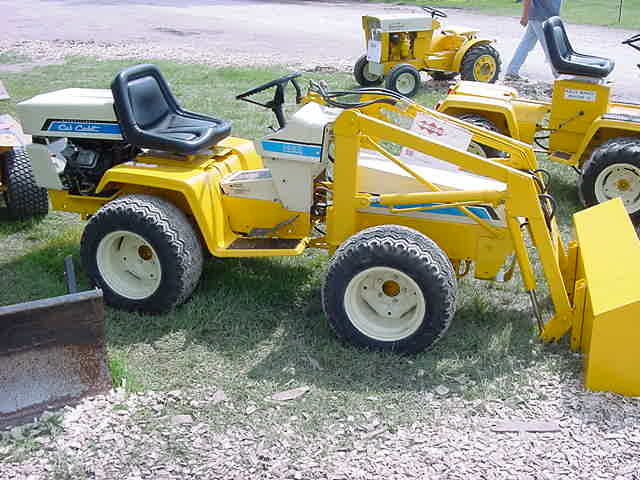 Happy New year EH!
Well my new year started with a twist as I woke up to an inch of snow, its been 5 years since it stuck to the ground & to think I almost cut the grass yesterday with the 1x9,oh well its afternoon now & the snow is almost gone maybe a cub day tomorrow?
Zach-congrats of the rolling(temp stuck cub) I new you were going to get it.
Thanks to all for sharing your knowledge you guys amaze me everyday.
PS. I'm still not in possesion of my 147 & its making me crazy !! its hard to live with just 1 cub

Zach,
There's only one brake disc inside your tractor regardless of what others might say! grin 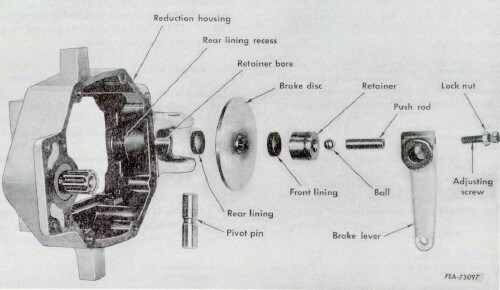 Jim E.- The loader that you posted is a great exsample of Kelley Birkey at work. His machines really are great.
T

How do you suppose they run the articulated loader in Jim's post? I would think it would be too hard to regulate the speed between 2 hydro's. Could you hydro the first axle then gear the second axle? You would have to remove the transmission on the second. Then you would have to figure out how to drive the second axle from the first axles hydro. Can you remove the gear box or hydro and just run the axle like a car? Just some wandering thoughts.
T

Terry- I thought that it would be hard to drive too. But the way the guy talks it works well, and he has insisted to me that they are very easy to build.
Z

Where is the "clutch shaft coupling rear pin" and how do I remove it?

I don't have a creeper.
B

Boy, I'm sure glad I don't have my phone numbers and address on my cards, knowing that someone will plaster them all over a website.

Hopefully this was done with his knowledge. Otherwise, it's VERY bad form.

Besides, the very same card has been posted within the last week or two. How many times do we have to repost it?

Ummmmm - just pretend the creeper isn't in that picture and that the driveshaft goes all the way back to the trans - the item marked "Coupling" will connect the driveshaft directly to the reduction gear shaft. Two spirol pins. You can get one of Ken Weaver's tools to push 'em out or you can lie on your back and wail on 'em with a hammer and a roll pin punch (or just a plain pin punch if you have to).