Are they the same fenders as an original or 70/100? I did see fender mounting brackets for a 72 on Travis's page, but nothing as far as the fenders went.
T

64 here. It is almost ridiculous, but I am not going to complain.
J

From Steve's post: "Bite the bullet and start over, with the Ken Weaver design. Thats the only way a loader should be mounted on a Cub."

I agree, you find any more pictures of your loader?

Have a good New Year

Bruce,
I could be imagining this, but the grass is looking like it's getting green

Are they plastic-covered concrete, or iron, or what?

Kraig- I don't think I'd wanna hang a PAIR of 55w bulbs on the front of a Cub Cadet... that's 110w, which is nominally 110/12= 9.16A of current... an appropriate fuse would be not less than 10A... probably better like 15A, 'cause system voltage will mosey up around 14v when gen-charging.. Problem is, how much current is the S-G's charging function good for, and will the engine be turning fast enough to keep the battery up? I think the OEM lamps were more like 15-25w each, with the taillamp bein' around 10-15w... total nominal load more like 65w... if the battery and S/G are in good shape, that's reasonable-and-proper.

Then again, if Zak wanted to really deal with snow, he could ditch the blade/thrower idea altogether, mount a 100A alternator off the PTO sheave, and a sextet of 150w CIBIE driving-lights aimed about 8' in front of the tractor... he could just MELT all the snow off! :-}
T

This has come up twice so i think I'll throw in my .02.
"Bite the bullet and start over, with the Ken Weaver design. Thats the only way a loader should be mounted on a Cub."

Only because of the stresses on the front axle. It is no more stable or safe. If anything its a little more prone to an accident. The only way to make a loader more stable is to lower the center of gravity. If you widen and lengthen the wheel base it would be more stable.

Engine rebuilding question.
Please refresh my memory concerning heads for the Kohler K-series. I've got a K321 out of a 149 that I'm going to rebuild and add ring gear start while I'm at it. The parts will be coming from a K241 out of a 1000. The 14hp head has the spark plug roughly over the center of the exhaust valve. The 10hp head has the plug roughly between the two valves and has a camel back hump "shrouding" the valves. Other than the camel back, the squish area looks roughly equal between the two. Which do I want to use for my rebuild???
Thanks,
Keith
M

F.Y.I./F.W.I.W.
SMALL ENGINE WAREHOUSE IN DUNKIRK, IN. has just developed a 18 hp Honda re-power kit for the 682/782 tractors. They claim that you don't have to even re-drill any mounting holes. The price is $ 1,250.00 plus freight and any taxes and it includes the muffler. Thats about $ 600.00 less than a new Kohler KT-17 Series II. There wbe address is: WWW.SMALLENGINEWAREHOUSE.COM

Terry B and others,
That's why they have BIG weights on'um. 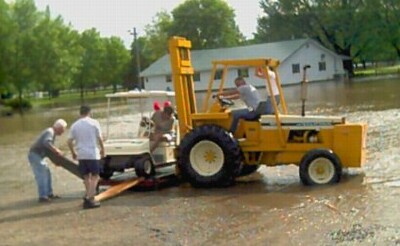 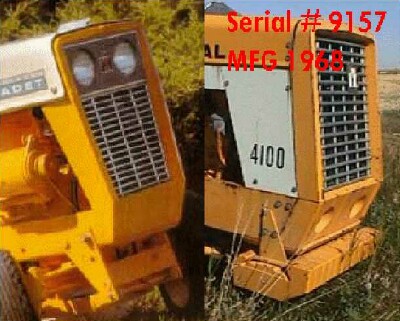 Creeper handle is normal length. As for plowing this spring, I doubt i'll make it. I'm gonna be really, really busy about that time.

From the hills and snowbelt of NY...

My vote is for the 14 hp head. In an L-head, the ideal location for the spark plug is over the hottest part of the combustion chamber and that's the exhaust valve. A flame front propigating into cooler regions of the combustion chamber is less likely to cause detonation of the fuel/air mixture ahead of it. Less shrouding of the valves is always of benefit to better breathing in a flathead, which is restricted even in the best of circumstances. Performance wise, what you loose in compression ratio by eliminating the "camel hump" you'll more than make up for in better airflow.

Matt G,
I think Dave was tryin to tellya that it would be easier on ya to engage the creeper if you have the longer WF creeper handle.
Wide Frame, 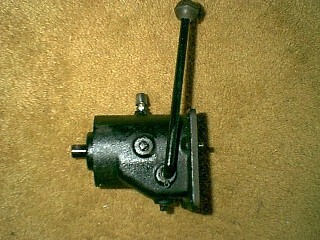 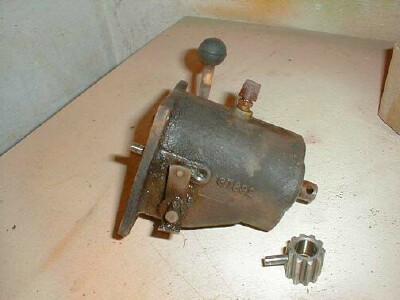 Bruce M wasn`t Micheal K Johnson from Youngstown Oh. ? if so I think he sold his original on ebay . or did you mean the north pole thing??

Hate to point out the obvious, but it is a wideframe creeper lever. The narrowframe one that came with the creeper when I got it was far too short. Also, I have seen others post pictures of wideframes with the lever looking just the same. And I never said it was difficult to engage....

Perhaps, Matt... it could be that I'm just so used to seeing creepers on NFs, and haven't seen enough on WFs to know that they 'look' that low. My 108's got a slot in the cover for a creeper, but no creeper... and Loader-Mutt has a slot there too... and a lever to engage a PTO... neither of which LM has (I used this cover 'cause it was free... no big deal, but mebbie I'll find a way to put a creeper and a live rear PTO on a hydro one'a these days!)

Did some window-shopping at a cemetery this morning- motored out to Windy Hills Used Farm Equipment to wander the aisles of forlorn Red, Yellow, Gold, Orange, Blue, and Green tractors. Shot a whole bunch'a pictures, if there's an appropriate thread to put 'em, I'll give 'ya a virtual tour of the place... there's LOTS there, and pardon me for saying, there's a trio AC-"B"'s there, almost enough between the three to make a complete running wide-front machine, perhaps a parader. I was looking for an F-cub, or an A, or B... the only Red power out there was a trove of Regulars in varying states of dismemeberment, some M's and H's, a 300 or two... too big for me to sneak home in the back of the Jeep... and hard to escape the scrutiny of the 'war department'. If I do a small one first, I'll be goin' from Cubs, to small farm tractors, and someday I'll work my way out to an Anteater parked out there...

Did get a LITTLE seat time today, pushin' some dirt for a neighbor. he's got a [email protected] 8N, back-blade and clamshell bucket, tried moving it with that, but couldn't get 'behind' the pile enough to pull it forward, so I did it with the 109... probably 20 minutes of seat time max. The rest of the day was spent getting ready for this... 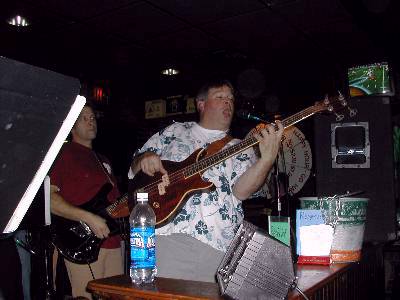 Jim E that was Richard that said that , not Steve.
Speaking of Steve - he had a drawing of his concept of a reverse loader that looked good that didn't use a conventional style loader. He drew a more industrial style loader frame. I was in the thought mode of making mine to where everything could be turned back around and have an unaltered cub and loader.

Digger's pic of the forklift with front weights points out that it's not really the lifting capacity that makes a loader better on the rear. All those weights on that lift will equal a busted axle too. It's for the reason that a heavy load will ride better when supported by larger wheels / tires that makes it more desirable plus the needed traction you gain. Not everybody has a paved playground. Weight on the front wheels will make them cut into the sod and tear up the grass if you're running the tri-ribs (for looks). Ever drop a front wheel into a little ditch or hole with a loaded bucket hanging out over the front axle with small diameter wheels ... you'll be wanting a backards loader too. I grew up on a ferd 8N with a loader and have used many others since then and busted hoses trying to lift more than they were meant to lift. I've dropped into several ground hog holes and ditchs and you get woke up real fast when that small front wheel hits, where as the big wheel would have "thumped" and kept going then another thump as the small wheel went in and out behind you. I've still got a burn scar on the back of my right hand when the front wheels went into a ditch once and spun the steering wheel across the back of my hand after it almost tore out all of my fingers , I'd hate to think what would have happened if there had been a loader on the 8N then but we had it off for raking hay.

Back when I threw that concept on the forum somebody emailed me and said that you couldn't get any down force to dig 'cause you'd be taking the weight off the driven wheels ... true but I was building a LOADER not a digger , that's what backhoes are for.

One armed bandits ... they belong in Las Vegas.
In a perfect world I guess you might be able to keep all the load and stress on the bucket at the corner where the arm is ... in real life you'll be hooking a rock , root or getting in an awkward place with the load where it'll be on the unsuported corner. That'll be a lot of twisting stress on the arm and cub frame. Pivot pins don't like that either as they want to bind.
On Terry's bandit you'll notice if you look closer that he has used bigger tubing for his single arm to support the weight of his load , where's the weight saving benifit he hoped for ? You'll need larger diameter cylinders too to get the lifting / bucket roll force to equal 2 smaller cylinders. I looked the CAD drawings over when they first hit the net , didn't like it then , don't like it now. I was born with two lifting arms , my loaders will have two arms too (or one center one as I was born with .... It's like over/under - side/side shotguns as one old guy once said , "If god had meant for me to shoot an over/under he'd have put my eyes one over top the other". Go with what's natural and things will work a lot better. 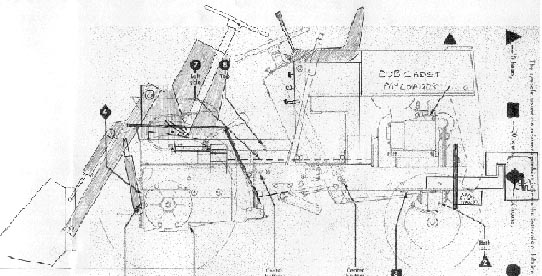 Dave what would you gain in putting a creeper on a hydro the live PTO that would be useful.