I'm nominating Dennis as a Good Will Ambassador for this:
"The one thing we can't answer is what your 125 is worth. It's actually against forum rules and even if it wasn't there's WAY too many variables in order to give a good answer. My only suggestion is to check the want ads here, maybe CL, Evil-pay, local paper want ads."
Smooth-as-glass answer!
Welcome, Robert. With the proper training, your 125 can be taught to do this:

Robert,
I have a 1968 model 125 also. It's my primary mower/snow removal machine. I just freshened the engine in the spring and other than belts, it's been trouble free since 2003. ( two deck belts, one mower drive belt and two starter/generator belts)

My neighbor wanted to get a new lawn tractor four years ago. I tried to convince him to get an older, mechanically restored IH Cub Cadet but he wanted "brand new".

He purchased a brand new cadet. Although it mows faster than mine, that's where the advantage ends. Even though he takes good care of it, it's plain just coming apart. It "ate" a drive belt this summer and he asked me to tow it up to the garage. I went over with the 125 and couldn't find anything substantial to hook up on the front, I ended up towing him backwards to his garage.

I've since added a 122 and can say with certainty that I will not be purchasing a new lawn mower. They just don't build them as well anymore.

Don T - re 102 transm oil leak - thanks, just had a fairly good look & can not see any sign of a breather, think it should breath thru shift lever mount. Need to get around to a couple of jobs on it 1 day soon. 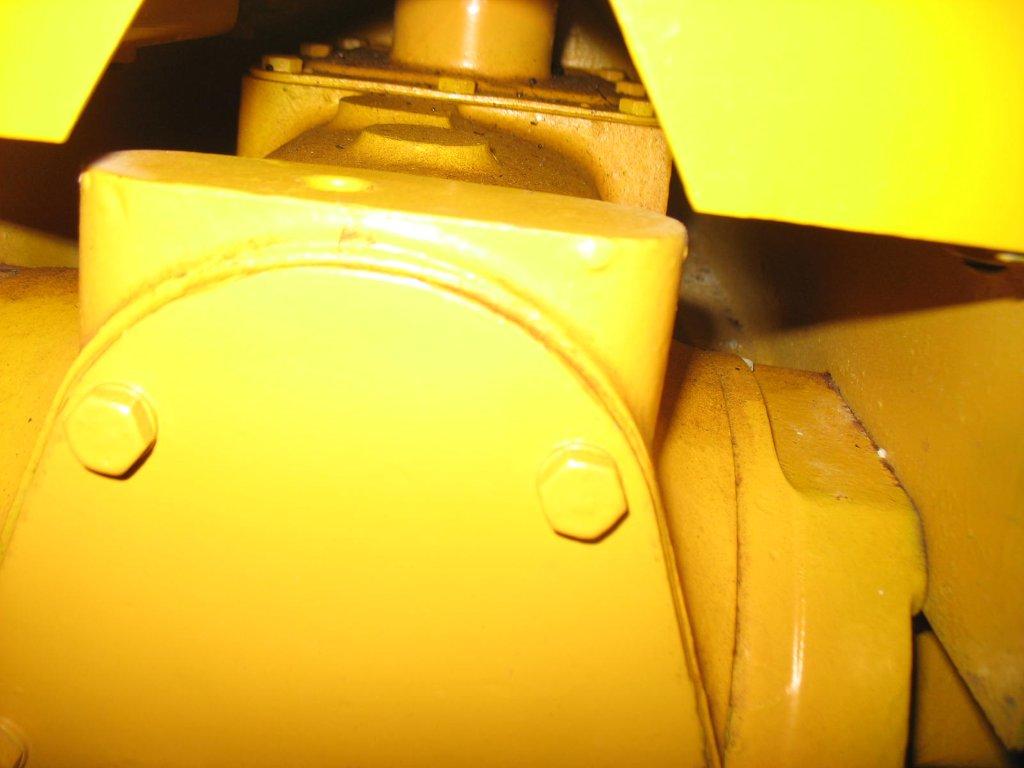 Rodney S -plenty of holiday accom. around here, just now & for next few weeks jam packed with holiday makers, who no doubt bring a fair bit of business, but also a heap of busyness.

Kohler crankshaft bearings - thought I was gonna have to pull out my parts pics (from way down here) but they would be upside down to you guys. Thankfully Don T has posted his the right way up. In any case, yes the seals are on both sides of the crank, but only on the outsides of the bearings, to let oil in & keep dirt out.

See that indentation in the flat surface on the rearend in your picture? That might be a breather. I didn't think there would be one there since the serial number tag was located there in some models. You may have painted over it when you painted the tractor. I wouldn't worry about it though, as it should be breathing through the rearend, and also, there shouldn't be any pressure building up in there anyway. The fluid temperature barely increases at all in a gear drive tractor, so the fluid doesn't expand enough to pressurize the transmission, anyway.
G

Matt G - thanks, just had another look, that "indentation" seems to be a blind 'hole', it is about 10mm dia x 20mm deep, too small for finger, looked in with mirror looks blind, nothing shown fitting there on parts list, probably a machining aid.
G

Matt G - BTW, agree re temp. theory, particularly with what I do with it, even the motor oil would struggle to get warm!

Still no one offering any knowledge of Tecumseh 707-002 Hydro?
G

GRAEME,
What is a Tecumseh HYDRO 705-002?
Everytime I punch info in I come back to Lawnmowers for sale in UK! I called an amish friend of mine who runs and owns AK SMALL ENGINES here in town but he's out doing chores.
I'll try tomorrow. What are you needing?
Rod
F

Hang on for a ride:
First, a question: Weren't the cast iron rear ends the same for both the gear drives and hydros? (I'm guessing YES).
If so, that indentation that Graeme shows would be where the breather is for a hydro, right? (Still guessing YES).
So: If the paint was removed from that area on a gear drive would a vent be evident?

Under Edit: Going to off topic tractors, now.

Rodney S: Tecumseh once owned Peerless, now owned by Husqvarna (IIRC), which made both gear and hydrostatic transmissions found in the IH Cadets, the 1100, & 482 Cub cadets, etc... Likely the same source...

The castings are not the same, so I would find it hard to believe that the gear drive castings would be machined with features only needed by the hydro tractors.
G

Warning, this is going to be very bad language!!
Tecumseh Hydro 705-002 is a belt driven hydro with a chain drive to rear axle on a Honda ride on mower produced in Italy/France about 1999. I would love a parts pic, or even anything about oil & changing it, hopefully with some pics.
Really sorry Charlie but you run the best site I know.
J 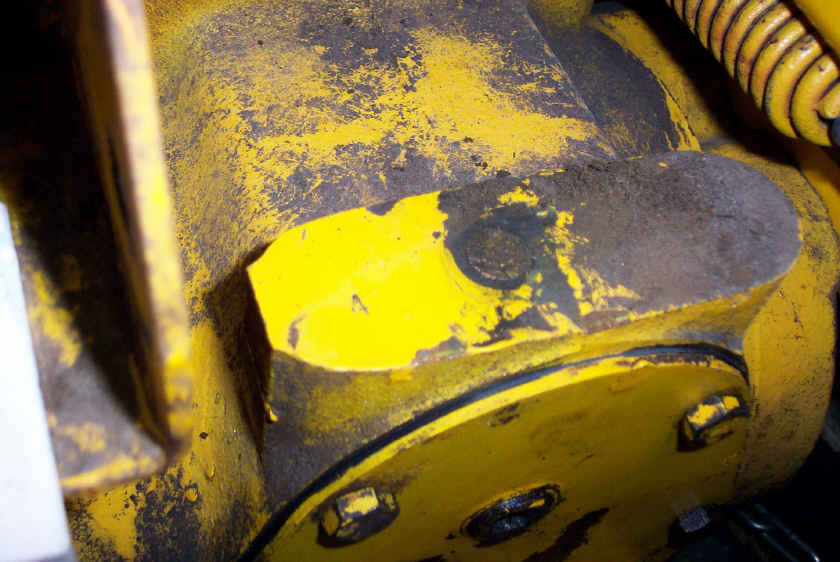 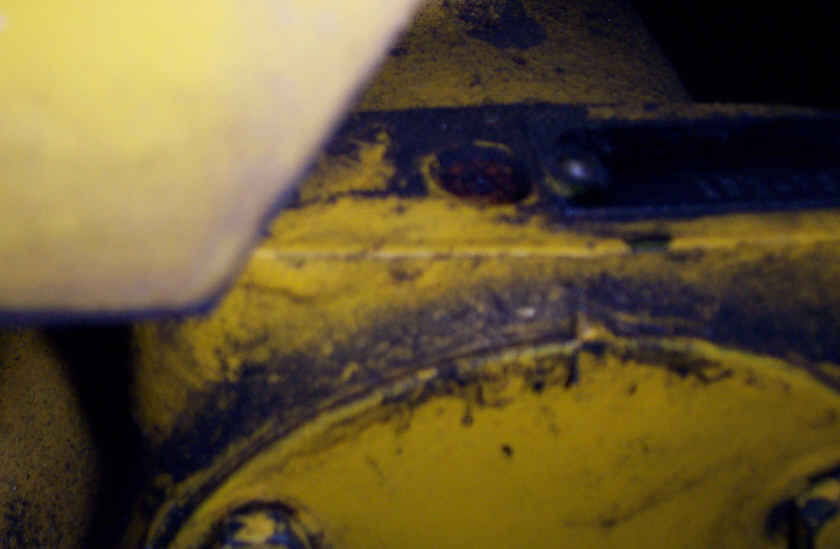 MYRON B.
Years ago I managed a small engine shop that sold MTD with BS or Tecumseh engines.At that time peerless was owned by tecumseh and parts were expensive. I saw lots of rods out blocks on the engines.
This summer I was checking on rebuild kits for a
MF12,thats when I found out Tecumseh was no longer in business.Also found out parts were outragess,so I sold the MF12.
ROD

The tooling that surfaced the rear section for the transaxle housing was likely the same tooling for both hydro and gear drives, as the differences are all at the front of the CI case, not the back...expalining the blind vent hole.

Gear drives DID have a case vent. They are vented throught the shift tower. The "cup inside a cup" allowed for venting of air in the case.

Hydros were all sealed up and required the sintered bronze vent in the top of the case.
D

Jeff Derstine
Lol I did manage to stir things up a bit , It was kind a boring with no posts and no pictures. I did surprise me that IH had two casting for the rear ends.I have seen the indent where the vent would be on my gear drives and thought they were just plugged instead of vented. A press fit plug is what I thought. I must haul the cover off my 100 and see if there is a indent inside the case. I have a neoprene gasket also ,like you have on your 125. I did stir the pot in hopes that some might not know and would see answers for

.If I only could remember half that I know I forgot lol.
D

Thanks for that info .two fingers typing and all them red lines takes me a bit!

Charlie,
My clipart isn't working!
Also we may need a clipart image of two guys boxing before this vent issue gets worked out.
I saw Graeme throw the first punch at DON.LOL

I pulled out my 82 series literature tonight (after all of the in-laws & family left and the household settled down some).

I found the following:

1)The accordian-fold index card sized lietreture that introduced the red tractors only had a 582, no "Special". These tractors were all pre-production photo models, with white painted front wheel bolts. These are the same photos used in the later 8.5"x11" lietrature.

2) My "IH Sales Know-How Product Guide to IH Series 82 Cadet Tractors" does not include the 582S model when comparing and contrasting the 82 series and the QL's.

3) The accordian fold "Specifications" 8.5"x11" literature does not include the 582S

4) The later full color 8.5"x11" booklet, includes all of the same pictures as the index card version with the following exceptions.

582S was added, but all of the pics were the same as the 582 and the word "Special" was air brushed on the hood of a 3 speed CI rear 582 model with the pre-production photo shot white wheel bolts.

Based on Paul's production records, and the lack of a 582S in the early literature, I think It is safe to say that the 582S entered the line ~1 year after 82 series production started.

Note: The 782 on the cover of this literature must have been shot later as well, as it has the revised front grill without the screen, all of the others have the early screen style grills.

1282 is added to the full sized literature as well. This tractor was obviously photographed at later time, But interestingly enough the front wheel bolts are red, (can't see the front axle), seat springs, and transaxle are also red.
This may be a literature shot with a pre-production 1282 based on a IH frame/paint scheme, but that may also indicate that IH had conceived the 1282 idea just about the time of the sale, and MTD subsequently produced them. What are the serial numbers/year dates on the first 1282 models? Based on some of the literature shots and the differences in them, the 1282 could very well have been IH developed, but not produced.

This isn't presented to be arguementative or to dispute any of Paul's production data, but rather to try to unravel the details of the "late arivals" to the 82 series line.
G

Hey Don, join me, not many can be introduced as "this bloke has forgotten more than most fellers know"

Saturday at 7:44 AM
Rich Donohue
R