Dang Tom!! You know that place too well.
Yep, we were sitting on a bench inside the loop. Other than the parade taking an hour, the show was great! Even the kids had a good time. That Fay's BBQ was to die for.

I hooked up with one of the traction guys and may be playing with them over the winter. They need a guy that can squeeze through the fire box door.

You are right, Mag ignition grounds the ignition wire to kill the engine, otherwise it stays "open" in the run position.

Keith
If you have power going to one side of the switch, and from the other side of the switch to the + side of the coil, the magneto ingition switch should work when it is in the OFF position (contacts made) and should stop the engine when in the ON position (contacts open), provided the coil/points are not fried because of being left on (sw in the off position)for a period of time. The key word is should, and will depend on the internal configuration of the switch you have. Normally, a magneto ignition switch would be 'made' when the sw was off, so it would ground out the magneto, and 'open' when on, so the magneto would magneto.

Tedd, I'll be watching for them, thanks!
B

Y'all should try Moonlite Bar-B-Q - it's awesome...

But no squirrel in the burgoo...

Missed the show cuz we were busy driving (and driving and driving) to Sebree, Owensboro & Louisville, KY over the weekend, at least I got to see a lot of the tractors going home on Sunday.

Woulda given you a shout, but it was yet another one of Julie's whirlwind buying tours for her business with very little downtime.
P

Greetings - After a busy time away I have finally, thanks to Bryan M., gotten back on the forum. Boy, I've missed some of you guys and ALL of the Cub talk.
Ny 125 is in the process or being "re-newed", though not restored. I've been laid-up due to some physical problems off and on for the past couple years and have finally gotten back on my feet enough to get back into some of the more interesting aspects of life. Anyway, the guy who is doing much of the work for me was looking for a CC project, and I had a complete 104 that was needing some attention, so we were able to work out a mutaully beneficial trade! The guy is a good mechanic and is very attentive to detail so I feel good about the results.
I'm going to start on my 123 today - it was running OK when I bought it but is has been sitting for about a year now. I did pull the hydraulics off for the 125 (they were better) and need to get new hoses made along with a few other bits. The PTO has no power (almost any grass stops the mower deck) and when I looked at the front of the engine I found the PO had replaced the button with a bolt! Now I think the clutch button has been worn beyond saving. I'll have to pull the PTO clutch off one of my parts engines.
One problem we have run into on the 125 is voltage -- I'm told there is only about 2 volts at the voltage regulator. Switched S/G and there was no change. Switched out the regulator for one off a parts tractor and there was no change. Battery is new. Any ideas? How is the voltage set at the regulator - the mechanic has the manual but said it wasn't really clear. He set one screw but couldn't figure out how to set the other one - at idle? A certain RPM? I suggested he check the ground, but I don't know if that had any effect or not yet. He mowed his lawn with it last night(lights disconnected) and the battery voltage dropped from 12.6 to 12.4 during the 1.25 hours of mowing, so it isn't too bad, but I would like to get it figured out and fixed.
Any ideas?

Hi Pat, and welcome back!

Your electrical problem is interesting... based on that discharge rate, it sounds like the system is generating enough power to indicate 'charging', but not enough to keep up with ignition consumption. You've changed out the two key components (SG and regulator), so that leaves only two other components- wiring, and the battery. Since the battery's starting the tractor, it's ruled-out... that leaves wiring. I'd suspect a poor contact at or within the ignition switch, or a wiring connection or ground. Greatest ground suspects are between engine and frame, and between voltage regulator and ground. The only other suspect is the current-shunt in the ammeter.

An appropriate test for charging is by putting a voltmeter across the battery posts- with engine off, ignition off, you should read about 12.6v. With engine running, you should typically see 13.8-14.2. If not, you're not getting charging...
P

Bryan
Moonlite had a place in Louisville for awhile, and there is still, <font size="-2">I think</font>, a couple of Owensboro style BBQ joints around here. I prefer NC, Kansas City, or TX style BBQ, but I like Moonlite's burgoo.
B

Since we really only have BBQ "pretenders" up here, just about anything is GOOD BBQ

But yes, I thoroughly enjoyed my few days consulting in KC a few years back. All that BBQ and all National at the airport had was a convertible. Life was rough...

On a new 12 HP Kohler engine I have never had any problems installing and getting to run properly. This one I have tried everything I could think of, and it will run and all of a sudden stutter and stop. Running at near full (Can't get to set idle yet.) It does not have to be choked to start seams to be to much gas.
My next thing I am planning is to pull the carburetor and check to see if the needle valve has something from manufacturer that is not allowing the float to close the valve. It has a Walbro Carb so the main is set. My own thoughts is first needle vale (Manufactuer chips, or even main jet.

Gordon-
How's the float level in the carb?...

I need to mount my tiller on my 129.i believe someone uses studs for the mount on the rearend. does someone have photos & stud lenghts on this fix.

Mike, I don't know what the lengths are but here are some photos. These are of <strike>Bryan's</strike>, er Julie's 1450. 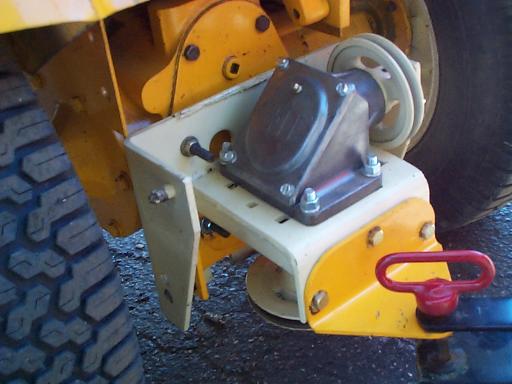 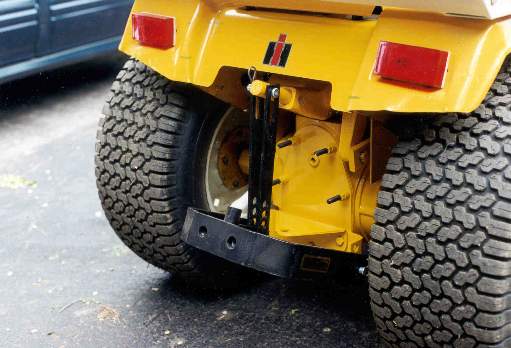 I used studs to mount my 3-point... mine were like 3.5" long... looks like Julie preferred something with a bit more length...
D

On the job in Alexandria, VA this Wednesday through Friday, then next Sunday night through Friday afternoon. Any Cubbers within a nice evening drive (and back) of the DC area?
M

Kraig &dave thank you thats what i needed to know

One of those good days today that you look forward too. Gave my oldest Grandson his first Cub. Gave him a 1250 that Paul Bell was nice enough to deliver when he picked up that old Original that was wasting away here in Phoenix. My Grandson is just turning 8 and has been driving Cubs for years but today was his first instruction on mowing. We took our time and went over all the safety items and the different mowing techniques. He listens well and is very cautious, did a pretty good job, a few skips here and there that we can live with. 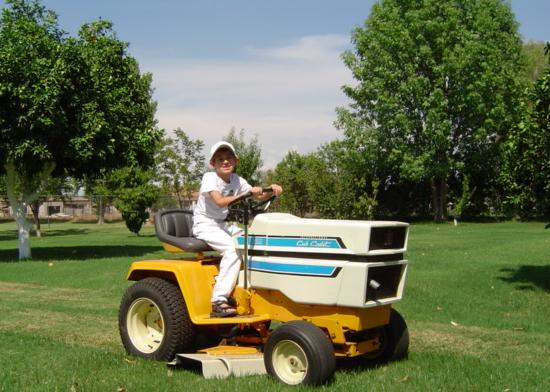 Rich- Appears to be in deep thought of driving a
cub. Better get started as will be big enough before you know it!!

Bryan- I like that term "BBQ Pretenders". Ever try Lexington (NC) BBQ? Makes ALL the others hang their heads.

Richard-
You've got a LUCKY grandson. Whether you know it or not, Hhe's gonna remember this day for the rest of his life!

Bryan,
You gotta' check out <u>Hecky's</u> in Evanston sometime on you way home from work. On Green Bay Rd. at Simpson St.. Those brothers know ribs.

Tedd,
Been going to the Sycamore Show for 20+ years now. Not a lot of "fluff" just good 'ol grungy fun.

I kinda' thought you would enjoy the steam traction engines. Next best thing to locomotives!

Richard,
Do you want to adopt another grandson. I like the warm Arizona sun, and could warm up to some of your hydro's.