I had actually thought about that, whether to use a plain tap or a bottom tap. I was thinking a plain tap could reach the valve shaft before the job was done.

I spent the day rebuilding cylinders for my loader. Of the total of 4 tilt cylinders I had to choose from, two are bent, and one of those can't be disassembled because some idiot PO beat on the end of the tube and peened it over, so I can't get the end out to change the O-rings. He should be hit over the head with a hydraulic cylinder. Now I'm stuck with two tilt cylinders that don't match, but at least they're the same bore and stroke. I also have 4 lift cylinders to choose from; of the two on the tractor currently, one has a broken snap ring and therefore can't be taken apart. The two spares I have are a horrible design...some project engineer wasn't thinking, as there is an elbow threaded through the tube and into the end cap, and another long tube into that, and the long tube is welded to the loader cylinder tube, so neither part can be unthreaded (and the cylinder can't be taken apart) unless the welds are cut holding that thing together...

We modified one of the lift cylinders, so I just need to take the other apart tomorrow and do the same thing, and then I can rebuild the valve. I'm thinking this is going to have to get painted since I've wire-wheeled a couple of the cylinders and stuff. Farm & Fleet has IH white in quarts on sale, so maybe that's my hint.
D

Wayne Shytle
I did not use any grease because that will trap the chips. I used wd40 as a lubricant so the flutes would not hold any chips.with the air you should wear goggles because you will feel the crap come out.Safety always.One thread at a time, you don`t want to rush it.

Wayne, To be safe, I would also roll the engine over to TDC so the exaust valve is closed and less chance of getting chip in the cylinder..
R

Jeesh Kevin,
I'd of thought that a 35 year old garden tractor (169) would have earned it's keep by now!
That's a fine looking tractor for mower duty.
K

Well Rick, I feel that anything old you do not use is a waste of a good thing..That is like going into a bar and seeing beautiful old Harleys hanging up for display. They should be on the road, not used for something they were never meant for..Same with cubs..
R 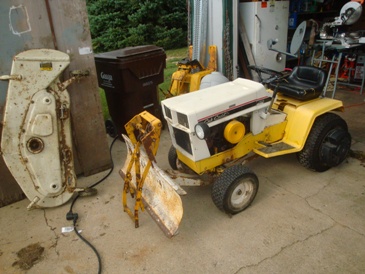 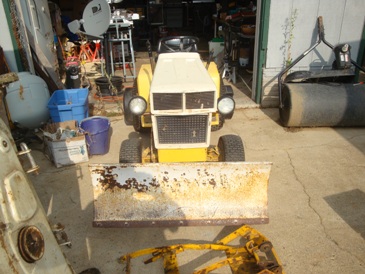 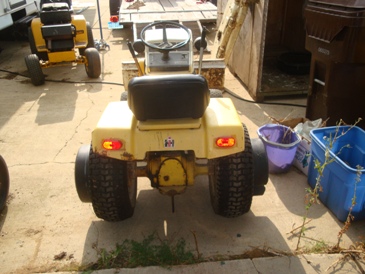 PO had the gear shift lever off and said that it is "stuck" and won't even roll. Pushed the clutch in and rolled it onto the trailer!

Time to start working on another one!

Was a good working day for the loader today. made a new toy for it. 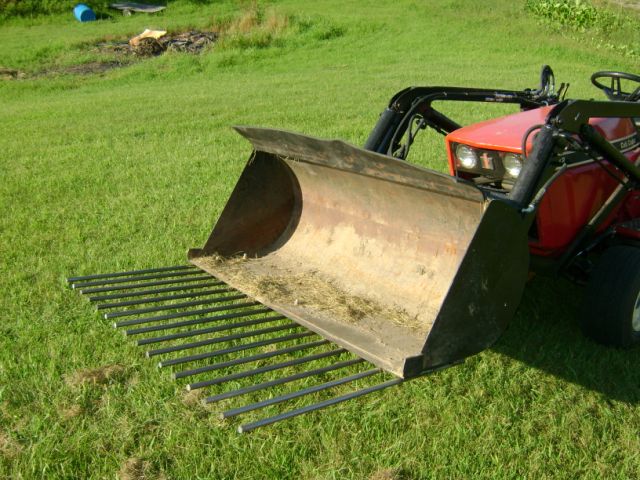 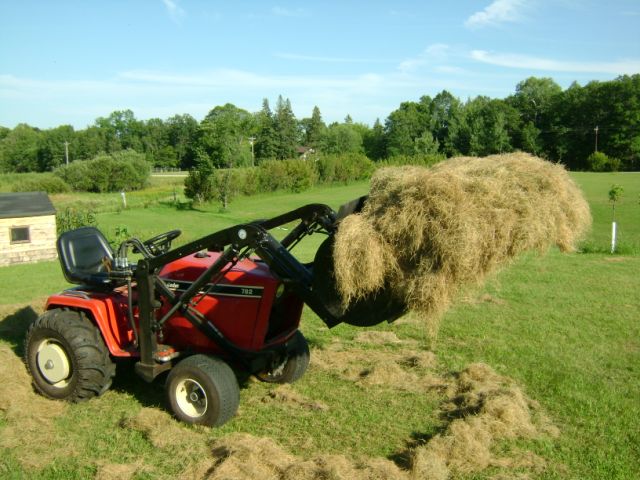 Wayne - I like Donald T's suggestion on using a broken out spark plug and compressed air, along with making only 1 thread at a time. Seems the safest route. Keep us posted with pics so we can see how this progresses.

I still like my customer washer idea. You might even have to add a few threads on the exhaust elbow pipe itself.

Hydro Harry
Old Cubs Never Die (but when the chips are down get yourself a brand new bottoming tap, and a compressed air gizzmo)
D

Wayne, is the busted off piece with the hole thick enough to use as a washer, thats just red-neck enough to work.
W

Has anyone priced large taps lately? I can see why machine shops can be expensive. Where can I find a decently priced tap? I don't even care if this one is made overseas or not. I couldn't find a 1 1/4" NPT for less than $65. This is ridiculous.

Thanks Kevin on that info about the coil.
D

Wayne Shytle
lol I knew when I see you were buy a tap you would be in for a surprise $$$. But if you have it you will be glad some day that you did buy the tap.


I`am off to the City today (Halifax N.S) and need the info on 12 K to give to the machine shop to get it bored. I will need the ring gap info and skirt clearance and can`t find the info I need . Please HELP I have to leave in 1 hr.

After I get the threads clean enough to take the elbow well I plan to put the pieces back with some kind of adhesive. I know it probably won't stay but I'd rather lose them in the lawn instead of just throwing them away. The lock nut should keep them there for a few revolutions.

You got that right. I found some single taps that were selling for well over $300.
K

Wayne, Be shure you have the correct size before you buy that pipe tap. I believe you need a 1" NPT bottom tap. Many machinists have their own taps and if you are friends with one sometimes they will let you use them. Also I would not buy Chinese taps as I have had bad luck with them. They seem to screw up the threads more than they chase them.
J

Before buying a tap, you may want to try to clean the threads with a modified pipe nipple.

I have taken a short nipple and with a hack saw cut partially through the threads at 6 places or more. I cut these "grooves" about half way through the pipe, so as you turn the pipe in, there is a place for the rust and dirt to go. This is kind of like a tap.

I thread in the nipple till it gets tight and back out to clean the grooves, then turn it in again several times.....till I get the internal treads cleaned out.

I've not done this on an exhaust port, but it should work here. I've done the same with a bolt to clean out a bolt hole.

You might try this before buying a tap.
D

WAYNE - Another idea I've used with some success is to buy a short pipe nipple in the size you need, 1-1/4" NPT, and saw a couple slots down the ends of the threads parallel to the center of the nipple, just like the flutes on the tap. It really won't CUT new threads but will chase some of the rust out of existing threads. Also I'd recommend NOT getting a closed nipple, too short, get something with an inch or so of unthreaded length.

Also, Kevin H is correct, roll the engine over BACKWARDS till the exh. valve is closed on it's seat, gotta get past the ACR on the exh. valve. Then there's no way chips, etc can get into the engine. No need to mess around with the spark plug & compressed air that way. THAT can be very dangerous, a few PSI of compressed air in a cylinder and the piston WILL go to Bottom dead center in a heart-beat and it won't care WHAT's in the way.

A tapered pipe tap is really what you want, not a Bottoming tap, for tapered pipe threads. The threads have to be a larger ID at the end of the port and smaller at the back of the port or the elbow will be very loose and never get tight. There is such a thing as "Straight Pipe Threads" but they need a "Special Dry Seal" male pipe thread form to seal properly. Granted your not trying to hold water pressure or anything but mixing thread forms is NEVER a good idea. Plus the taps will be more expensive.

Proper tapping procedure is to tighten the tap maybe a quarter turn and back the tap out a half turn, then tighten again an additional quarter turn. Don't force the tap to turn in too much because those BIG taps are really strong, they seldom break but I have seen it happen, but they also put a LOT of stress on the exh. port to expand the hole and can crack the exh. port.

Also may be best to NOT use the lock ring. As it tightens it will try to pull the exh. elbow out of the port. Once the muffler is installed the elbox shouldn't turn anyhow.

Also, not surprised at the price of those large taps. Once you get above 1" NPT they get Brutally expensive. You should check prices on NPT thread gauges on 1" NPT or larger, "Go & No-Go" gauges are $300-$500/set.

You might want to check with a local machine shop or plumbing shop to see if they have an old used almost worn-out tap they would part with.

He's trying to cut new threads, so that's probably not going to work.

Dennis, You are correct that a tapered tap is easier to use and should always be the first choice when possible. However the reason I suggested a bottom tap is because I do not think there is enough clearence in that hole for a tapered tap. There is the valve guide about 2 in. or so at the back of that exause port and I feel a regular tapered tap will hit that before it will do any good.
K

Wayne, I measured the pipe on my K-241 and it is a 1" pipe. Pipe sizes do not go by O.D. like a bolt size does. If you are not shure, stop at a hardware store and pick up a cheap pipe nipple to use as a gauge before you buy a tap.
W

Thanks a lot guys-

Matt- I didn't think about Amazon but it looks like the best source so far. What size IS the darn port, 1" or 1 1/4"? I certainly want to get what I need the first time.

Dennis- I actually have several bolts I've done that with to clean out and chase threads. I use them every time I pull a bolt and it has signs of rust and dirt. I have decided to go ahead and pull the engine because the po said the valves needed adjusting and it has the dip stick down by the points cover and you know what that means (probably), grenade gears. I'll just go through everything and do the port work when I get the valves out. That's also a great idea about trying to find an old tap from a plumber.

Kevin- I hate using Chinese stuff but due to the way things are in the country now people are forced to sometimes because of cost. I also figure since I'm pulling the valves I'll be better able to get the tap a little deeper.

Thanks again and I'll keep yall posted. I'm dealing with a sick mother today and this week so the cubbing has slowed a bit.

S
PTO on my 1512D cuts out (stays in upward position though) when mowing grass after 45 minutes to an hour.