I'm looking for the "Heat Baffle" originally distributed with what appears to be the dealer installed "Noise Suppression Kit" for the 1x8/9 tractors. The part bolts to the cylinder head and then rises a bit in order to cover the top of the larger Noise Suppression muffler and provide an attachment point for its "free" end (the other end attaches to the exhaust port in the block). The item I'm looking for is pictured below: 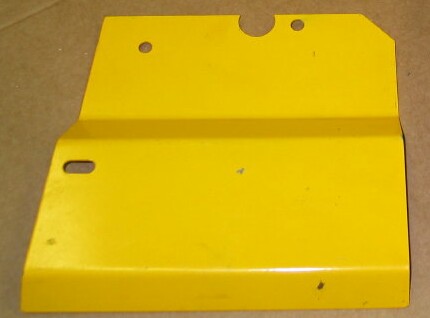 That appears to be the heat shield from a 169 which is exclusive to that model.

Wayne: Yes, I believe it was used on the 169, and may have been developed for it, but it was also part of a Noise Suppression "kit" which also included the larger NS muffler, the 1" dia. x 1-1/4" (actual) nipple to mount the muffler to the block, a different air cleaner and base plate (with holes in it), a seal for the air cleaner, and new gasket between the air cleaner and the carb. The air cleaner had two holes in it, like the 169 version, but was not as deep. 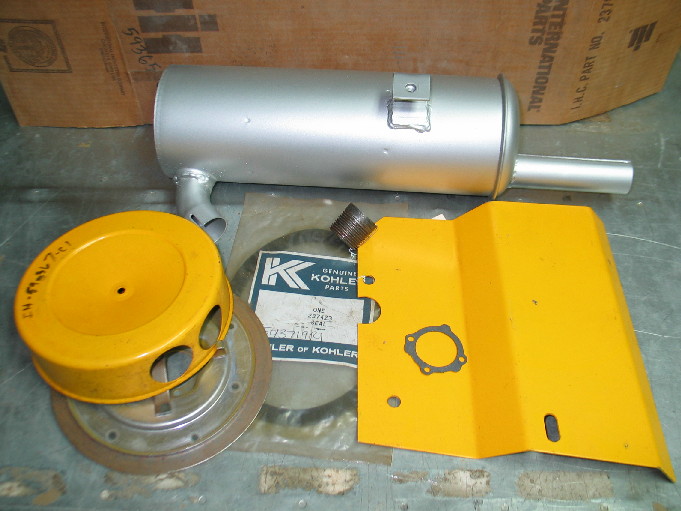 Note: The NS muffler depicted above, made by Nelson, is larger than the stock muffler, but not as large as the 169 muffler. I think the 169 muffler has an even larger diameter and a longer body with a very short tail pipe.

Wayne, the 169 heat shield has slotted holes where it mounts to the head. The photo that Jeremiah is for the optional "Quiet Kit" heat shield.

Kraig: Thanks for the link. Did Bryan report a significantly quieter machine as a result of the upgrade, do you know?

Photo of the stock muffler side-by-side with the Noise Suppression muffler; you can see how much bigger it is. (Note: I still have some work to do cutting the 2" nipple down to size. 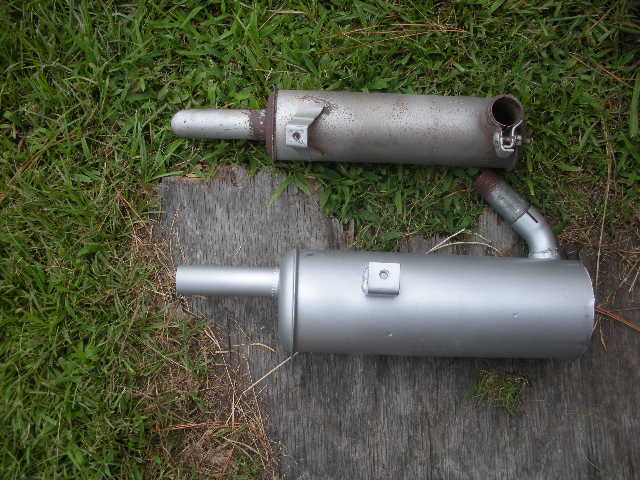 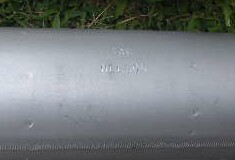 Jeremiah - I'm not wanting anything but I'll see if I can get those dimensions of my non-correct 169 muffler this weekend. It looks just like yours in the pic, but may have overall larger dimensions. My memory of a previous comparison to an original 169 muffler is that the diameter and length of the main body were the same, but mine had an extra long exhaust output pipe, and I also have the curved and slotted inlet pipe.

Thanks Harry. If I can't scare up the original part, "rolling my own" is the logical next step. I would be really interested to learn the dimension from the #4 stud (the one located in the most forward position) to the first bend and how high the metal rises at the muffler. I can't tell from the picture very well, but it seems that the angle of the first bend (counting from spark plug hole toward the muffler) is slightly less than the angle of the second bend at the very front. I don't care about locating the "cut-off corner"; I can manage that myself, even the overall width of the piece I can guesstimate; but getting proper height and "offset" of the muffler mounting slot is the key element in the design. I would also be curious to learn the thickness of the metal used in the original design; my "turned-down" baffle is at least 14 gauge
--fairly heavy duty.

looking for a brinly style single disc or cultivator near Iowa , or Wisconsin
J

Looking for a solid #1 cart. I'll have some pick it no worries about shipping..Thanks..Joe
P

I know they're rare, but I'm looking for a Jiffy Balling Sickle Bar Mower manufactured for the early Cub Cadets. If you know of one for sale, please email me at pf2 at evansville dot edu. Of course, the at is @ and the dot is (.). TIA
M

Wanted.... I'd like to find a narrow frame hyd lift for my 125. If you have one with the rockshaft please email me at [email protected]

Paul Gunns.. just click one of the colorful "cards" above.. They can deliver new (or sometimes used) parts right to your door!

We all have our favorites.. I prefer CC Specialties. But the other guys are very helpful as well!
R

Looking for a good wide frame Cub, preferably a 149 near Florida...road trips aren't as much fun as they used to be...have two Originals complete...a 4 digit I use to mow with and the other tore down to refurbish....would consider all trades.
C

I need a used NF clutch guard tin for my 71. Its okay if its a little dinged up- 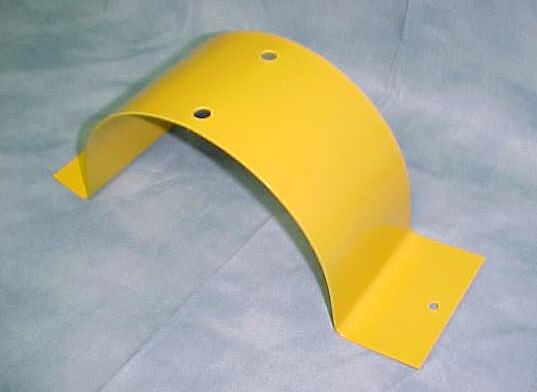 I also need a filter cover for my 71- I'm not sure if a K161 used the same air filter size as other Kholers, but the bondo-patched cover I have is 5" in diameter.

I've got a HUGE problem! I need a hydro for my 1572! The main shaft is junk and I can't afford the $600 to buy a new one. Does anyone have a decent used one they would like to part with? Thanks. Cam
B