Farmall Cubs equipped with deluxe seats came with a curved shifter same as standard on the Lo-Boy.

According to the pic, it appears the original tranny shifter is bent a little more than the cub tranny is.

Wishing it would cool down, so I could start on another cub.

OK no laughing at this question, but has anybody ever had to fight oil leaks on a quietline with the drain plug? I got at least 4 different OE drainplugs and a deep sump cast iron oil pan on my 1450 and had the occasional drip drip drip. So I go up to NAPA and get me a new fiber washer and install, still leaks. Then I put another new fiber washer on a different drain plug and also wrap the treads with PTFE tape and it leaks worse!!!! So do I need to purchase the original OE drain plug gasket for a quietline? Is it super magical?

Cast iron oil pan is probably threaded for a pipe plug, not the straight thread plug with a shoulder the later machines use. Will a pipe plug thread into the hole?
R

So if I understand you correctly, the deep sump cast iron pan (same as the aluminum deep sump version) is threaded differently?

The drain plugs I'm using all appear to have a slight taper to them. Regardless is not the sealing being done by the flanged portion of drain plug with the gasket?

I'm unclear as to where the cast iron deep sump pan came from, as I acquired it for a K341 build in the 1450 and wanted cast iron instead of aluminum. I figured the Cast Iron Pan along with the cradle modifications would help with the big 16hp shake! I acquired the pan from a local engine rebuilder trading him a K321 block that needed to be sleeved.

According to the parts lookup, the drain plug is NLA from cub. I was hoping somebody could advise what type of drain plug sealing gasket they are now using because I believe the round fiber washer/gasket is NLA as well. 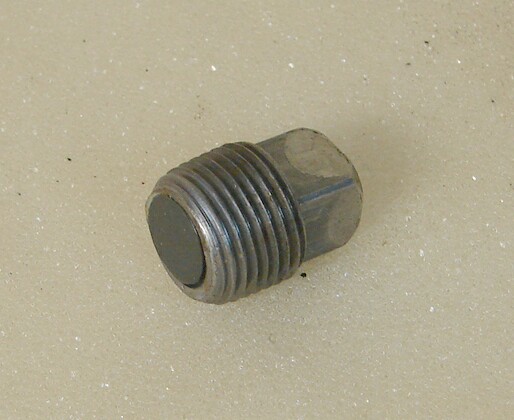 Flanged plug has straight threads. I don't think I have seen a cast iron pan with a straight-threaded oil plug. A pipe thread plug seals due to the taper in the threads.
R

Thanks for the reply. I will try a tapered pipe plug next. I got it dripping into a container parked up in the shed. Going to be very clean internally as this will be the third oil change in about three weeks....grrrr!!! at least oil is cheap!

Isn't this where I should stir the pot and ask which oil is best for my engine?