Allen - We're not even sure what Bill J got his other soleniod off of, might be from a car, truck, or larger tractor. Depending on what style of coil Kohler chose to fit, there may have been some engines in other brands of garden tractors that started with 12V to the points/coil and ran on 6V.

It was surprising how much simpler the wiring was on the 70 I refurbished compared to my 72 that's only three years newer. The Original, 70/100 all used the "Shotgun switch", the heavy push bottom made to handle high amps, no soleniod. Everthing newer, 71,102/122/123 and on used a soleniod with just a key switch.
M

I don't post much because I can usually find the answer with a search.

However, I couldn't find the answer to this question. Are the lower starter/generator brackets the same for narrow and wideframes?

I was working on my 149 and found that one of the mounting holes for the S/G had a broken bolt, and the remains of the threads had been crossthreaded stripped and wallowed out. Somebody else broke the bolt off, I tried to limp it along on just a couple of threads. Time to make it right.

Between the forum and the advertisers, in the last three years I've rebuilt the engine (.010 over), replaced the S/G (should have drilled out the broken bolt then), rebuilt the PTO, added the rear lift arm to the hydraulic lift, installed a new wiring harness, replaced the tires, front axle pivot, added the upgraded ball swivels to the tie rods and did the U-joint modification to the driveshaft. Also, redid a QA42 snowblower with bearings and auger ends, chain and sprockets.

This sight really is the best tech manual for these tractors.

Thanks for your time,

If there is legth to weld a nut fast to that broken bolt ? I would try that before drilling it out. I find welding a nut fast works great .
M

Nope. The bolt is broken inside the casting. I ran it with a short bolt. Bad idea as it pulled the threads and wallowed out the hole. The prices for the bracket on-line aren't too bad for me to consider. Just needed to know if there is a difference in brackets from engine to engine or narrow to wide frame.

I could be wrong but I think only the original has a different bracket on the engine.
M

Thanks for the info. If anyone else agrees, I'll consider it confirmation. I appreciate your time.

Matthew A'
For the most part the narrow frame and wide frame starter generator brackets are the same except for the model 86. Also the Original and model 70 brackets have a different part number, but I believe they will interchange with the others also. The early Originals had a fabricated (welded together) bracket, but it was soon replaced by the cast bracket.
M

That's good enough for me. New to me one on the way. There aren't too many more things to go wrong on the old girl.

Got the solenoid off. Found another solenoid in my stack of stuff in the basement and it is similar to the one I took off the 1650, so I'll just use it.

Didn't get to install the new one - to much other stuff getting in the way...

My Wife thinks I'm nuts for tinkering with these IHCC's and my other color tractors. I think she would rather I go out and spend some rather large $$$$'s on a new JD and unload the basement and yard of the "junk".

One of these days, they will ALL run - most of the time...

Donny: An Engineering degree to know the difference between Volts and Amps?? Just tryin' to keep it real (ya know, everything you read on the 'net is TRUE) ..

I have drilled out the threaded holes on the S/G brackets before to use a long bolt, nut, & lock washer to mount the S/G. You may be able to drill the broken end of the bolt out of your bracket if you have access to a drill press and vice.

The bracket is just cast gray iron, machines/drills like butter, or like a "Rotten Banana" as one machine shop owner told me 30 yrs ago. Any twist drill bit with any kind of decent cutting edge to it drills the bracket just fine.
P

Dennis
The bracket for the 86 is different, it is offset forward. That little 8 hp engine has a crank with a long "nose" on it to move the PTO clutch forward so the mule drive belt will clear the front crossmember. The crank,SG bracket, and muffler used on the 86 are model specific, like the starter, muffler, airbox casting, and air cleaner are on the 800. Maybe these pictures will show what I'm talking about on the 86. The tractor is in a shed and I didn't have good access to take pictures. 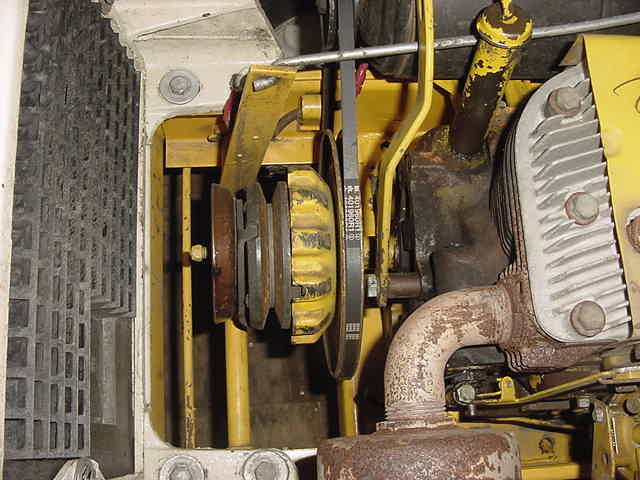 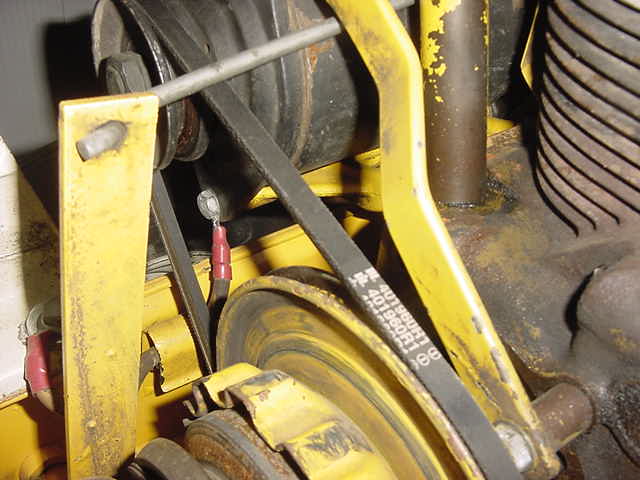 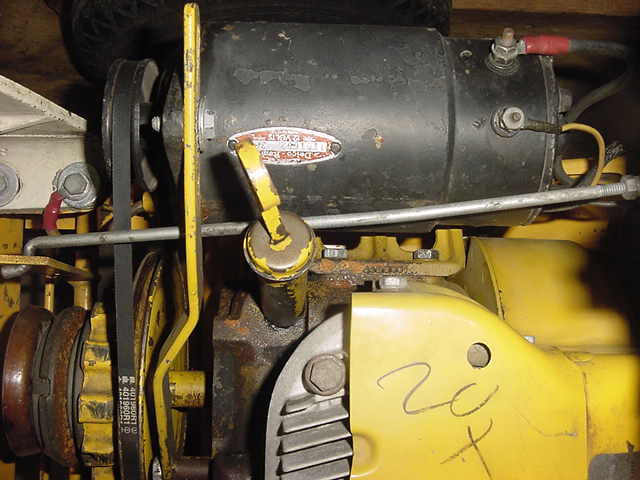 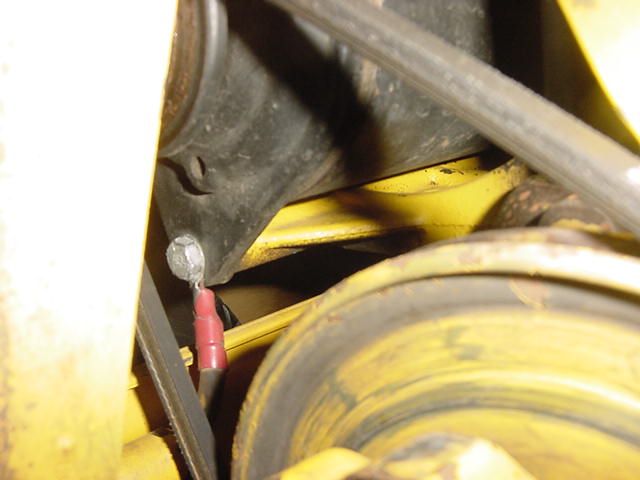 Jerry I guess I should have said 7 hp or 8 Hp sg brackets are different than nf or wf 10,12,14,16 hp. But the I did not go into detail with a long paragraph lol.
I have drilled though a bolt so my welding rod would pass through so I could weld a bolt fast to a broken bolt buried in a block.The broken bolt is usually or torqued and stretched on the wrong weight. WFM
D

PAUL - Yes, that casting is a lot different than the normal Kohler/CC S/G bracket casting. The spacer between the top S/G adjusting arm and the block are a good indicator how much farther forward the S/G, basket pulley, etc are and how much longer the crankshaft is, I'd guess about an INCH.

Onto another CC "Hot Topic" we've discussed here. The right frt tire of my 982 was low on PSI when I fired it up this spring, the tubeless tire was leaking down. I aired it up to 16-18 PSI and discovered the other day it's low again, probably down to 8-10 PSI... no wonder it steered so hard when I mowed a week ago. So it's getting INNER TUBES in both it's frt tires this afternoon... The last TWO tubeless tires on tractors I own are getting "tubed". My tandem axle Pronovost P503 dump trailer still has tubeless tires without tubes, but tubing four 18-8.50X8 tires on it isn't in the budget right now. I'll wait until some day when I make a tight turn on my concrete driveway with about 2000# of dirt or rock on the trailer and pop a bead on a low tire off the wheel.

Have I mentioned on here before how much I hate tubeless tires?

Paul B.-Do you ever make it to the Heritage Weekend in Lanesville?

Alex S,
I have not been there for several years, and never did display anything there. Too much of a "carnival atmosphere" for me with too many people that really don't care anything about the tractors/engines, or respect the the time, money and effort that have been put into them. At least that is how it appeared to me, and the reason I quit going. I would hope that has changed since I was last there.

Paul,
Is there a reason for the numbers on the heat shield over the head?
My 86 has them but are different from yours,and the spare motor I have has them also.
P

Lewis,
I don't have an answer for the numbers, and within the last year I've had and sold 2 other 86's but remember if they had them or not, but I don't think so.

Thanks for the quick reply Paul.I have seen a few other 86's with them also. 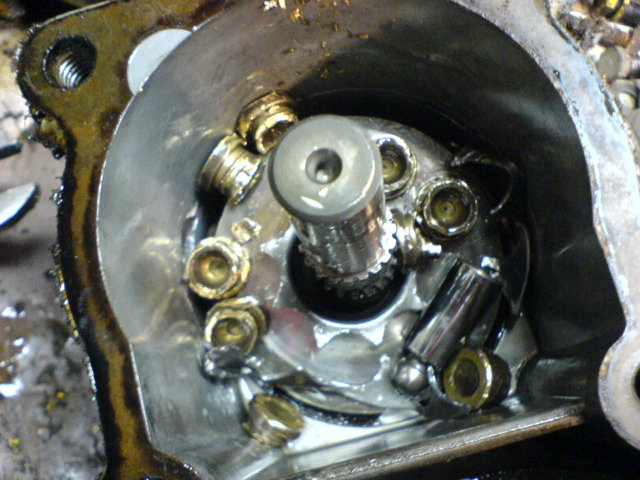