any former truckers in here

wondering if there are any former or active over road truckers in here? i drove for the former carretta trucking from nj for 10 years running coast to coast team ,
sometimes i miss it,most of the time not.
J

Yes I drove truck for many years. Mostly western states. I still like big badass trucks and still have my cdl but I don’t miss driving. It’s been about 12 years since I’ve even been in a truck. Now I work at a mine and enjoy my family time and all of my cub cadets. 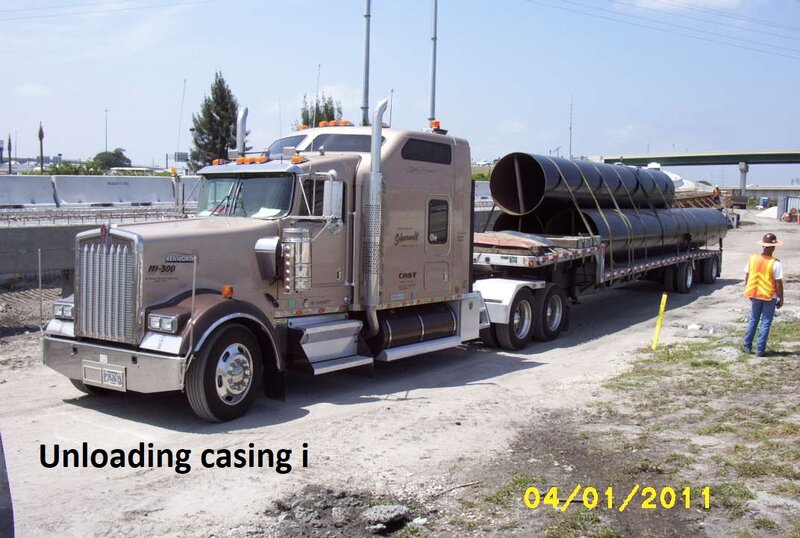 carretta family is still around just only as a brokerage named ultra logistics in fairlawn nj .

Yes, I recall the name.
When I started driving in '66, small local firm, Midwest Distributors Inc, we were hauling shell eggs to NYC and Deep River CT. and trip leasing back hauls.
SA long haul in an F model Mack, 15 speed tri-plex.
No A/C, no P/S, no radio just bare bones truckin'!

OMG twin sticks, learned on a B61 twin stick 10 speed and a 1961 autocar twin 10 later for a very short time a R700 tri plex yah zero frills no nothing
watch this both hands off the wheel grabbing gears with both arms

Been there, done that!
Spent some time in a 65 Diamond T as well when I first started.
That is until a combine got hit in the rear by a car and came left of center and wound up in my lap!
Hard to tell who was 1st at the scene, me or the farmer!!
Almost finished mt trucking career before it got started!
Was loaded with eggs and was on my way to my last pick-up to finish loading.
Dec, 1966 just before Christmas.

being in a cab over you were one very lucky man, i doubt there are many drivers who didn't see 1st hand how unsafe they were in wreaks .

still today i wish i could make one last west coast round before my days end, just like other licenses my cdl is gone,my pilots is gone and i fear losing my USCG fv captains due to age
upside from marine is a few boats still have DD's for power so i get to hear that sweet sound
D

Drove for Flav_O _Rich and Rector Oil 15 -20 years total . Been out of it long time. Miss it at times. But as I read on another post, Not that much
I got out of it to spend more time with family....
M

I didn't go cross country, stayed in New England mostly, drove for Brinks for 5 years then went to work driving cement trucks. Only place I ever knew of that every truck had overweight stamps, Even the "lightest" truck could run over 100K pounds! All on 10 wheels. You better have your wits about you!

I did not make a habit out of going west as all the freight coming back out of there for flats and steps is mostly a loser unless you have good contacts and don't mind spending the time and fuel to build a good paying LTL load.
Lumber loads for peanuts/mi and 50K lbs to boot plus tarp!!
Naahh, I don't/didn't need that hassle!
D

I drove for 3-4 years in the mid-1980's, company based out of Davenport, Iowa that's long gone now. Ran Day Trips mostly to the Chicago area. We did quite a bit of cartage work mostly for International FARMALL PLANT, and a tiny bit for East Moline combine plant.
I drove a tilt cab maybe 4-5 times, aTransStar IH mostly, a "2-Story Ford 9000" once, I tried to stick with one of the 5 '79 White Road Boss 2's they had, 320 hp 903 Cummins and 6-spd Spicer, they were governed to 67 mph and would hold that speed loaded to& from Chicago to Iowa when I first started driving there, and they slowly slowed down due to poor maintenance. The slowest truck was an IH S2200 with shiny 290 Cummins and 10 spd Road-Ranger, it got so it would barely run 55 mph. It just made a Long day that much longer. The longer I drove the more local cartage work I had to do in Chicago, and then they found deliveries and pickups for me as far away as Osh Kosh, WI.
I started running to Kansas City for a change of scenery. They had me pick up in Neosho, Missouri once, huge storage cave, ran several miles back into to hills from the entrance loading dock. Two truck loads of El Paso Taco shells loaded out ahead of me, I got my split load of BFG backhoe rear tires, half for JICase in Burlington, Iowa, other half for Deere Dubuque. Then for about a month I had to pull 6 empty 45 trailers out of the Milwaukee Piggy-back rail yard and spot them at BFG's warehouse about a mile away. Next day I had 6 loads to take back to rail yard and pulled 6 empties out of the railyard. It was kinda sad, I was tire, rim, & wheel buyer at Farmall for 3 yrs, I knew about 5-6 people at BFG that when I was done shuttling trailers they would be out of work.
I hauled ready- mix 2 summers, summer of '75 in a '74 Diamond Reo, 9 yard REX mixer I could only scale 7 yards with. The little 555 Cummins and Allison 6-speed auto Trans really struggled to move the truck. The sticker on the engine said 208 HP @3200 rpm. The 7.3L Powerstroke in my '96 F-250 made 215 hp. The mixer had a huge crankshaft driven hyd pump to turn the drum, it really ate up the HP. The mixer had a 3-speed Brownie aux Trans, a 2:1 reduction underwrite, a direct, and a .8:1 overdrive. I REALLY needed that underwrite to get around off pavement at construction sites. Empty I'd run home empty in Overdrive.
I drove for several months for a guy whose main work was delivering paper for Leslie Paper, I ran from Davenport to Des Moines every night for 6 months, and on Friday's I'd delivery misc freight north to Dubuque one week or south to Muscatine, Burlington, Fort Madison, and Keokuk the next week. He had an '82 F-700 Ford single axle tractor with a Detroit 8.2L Fuel Pincher engine, 5&2, was about like driving my F-150 except for the air brakes. The days I delivered to Dubuque I'd have 2, maybe 3, maybe 4 skids to a downtown print shop that had their dock on the alley with only about 40 feet from the dock to the brick building across the alley. I could only get INTO the alley 2 blocks north of the print shop, way too tight of turns to get a 45 ft trailer into any closer. Little things like huge electrical transformers hanging on power poles in the way. But the fun was just starting. I'd drive past the print shops dock and stop, jot down license #'s of any cars parked in my way, go inside, give my list to the shipping Forman, people would come out, move there cars, and I would jack-knife the trailer back into their dock at an angle, 45 ft trailer in a 40 ft space, they had a BIG aluminum dock plate we'd slide into the trailer and start wheeling pallets. I even backed in there once with a 1970 Kenworth tilt cab twinscrew tractor, 6-71 Detroit and 10 spd Road Ranger. What a PITA. My F-700 had power steering, the Kenworth didn't.
Buddy I drove with hauling ready-mix considered buying a short nose Louisville tandem axle dumptruck. I BRIEFLY considered buying one with him. My cousin did that as a side-line to his farming. And a guy in the little farm town I grew up by tried to make a living with a '64 C-60 Chevy single axle dumptruck with a cheater axle, not sure what Chevy had for big block power then, maybe 366 & 5+2. That's what the '67 C-65 and '74 C-65 I drove for the township had.
Even the readymix company I drove for found out that it was cheaper having someone ELSE hauling material for them. They had two tandem axle '66 White tractors, 220 Cummins & 4x4 Trans and matching aluminum dump trailers that they last used in about 1975.
Back in the 1980's when I was hauling lots of groceries, there was a husband & wife team that I'd see about once a week, I forget who they were leased on to, Wife normally navigated but I heard she drove a little too, Ford 9000 tilt cab. They retired out of farming and thought trucking was less risky.

Did the grocery thing as well for backhaul when I del'd Chicago, 5-6 stops on sheel eggs, sometimes frozen egg whites & yolks to bakeries.

Deadhead down to Certifies Grocers on south Central I believe it was. Spend half the nite loading grocery dock, produce dock then frozen dock & had to wrap that crap in blankets.
Then deliver 2 stops in IA next AM.
Home overnite then back out to reload 3-4-5 stops to pick up then back to the windy that night and start all over again.
Stopped one nite for a nap near Savannah, IL.
Not a good idea!
Woke up after a few hrs and the cab of the macks ceiling was covered in mosquitoes!!
D

I started in'76 driving a '71 Diamond Reo,903 Cummins,no turbo,13 speed,of course,Armstrong power steering.Most roads were two lanes,went thru every little town.The rough ride and the steering made a man out of you real quick.And who else can remember running with the windows down and getting chunks of bugs in the face after they bounced off the mirrors. I live up by Madison Wi.we ran out thru Iowa a lot,a memory of mine,the hatching of bugs crossing the Mississippi at Dubuque,what a mess to get off,after pulling the big hill on 20,with the light at the top.Another Iowa memory,that sloped little shoulder,that grabbed your steer tire,that would wake you up.I'm enjoying this blog

You would never recognize Dubuque now when you go through it!
I had forgotten about the may flies on the Mississippi!
Ever cross the old (now long gone) Eagle Point bridge IA/WI?
How about swapping mirrors on the old Savannah IL bridge?
Used to run US HWY 20, US 30 and IA/IL rte 64 a lot depending on which side of Chicago I was headed for.
Running a day cab R700 for a year or so on the grocery run I had a bunk room reserved for o/nite at the old Big Rock truck stop on 30 for a while.
Oh yes, and the Petty Coat Jct. Truckstop at Jct Ill 26/64
The list goes on and on!!
Let's see some more old pictures!!
I can't be the only one here that has some.

A buddy of mine in the same tractor club as me. He uses to haul tractors

Here’s mine, the last

Just had to pass this one along!! 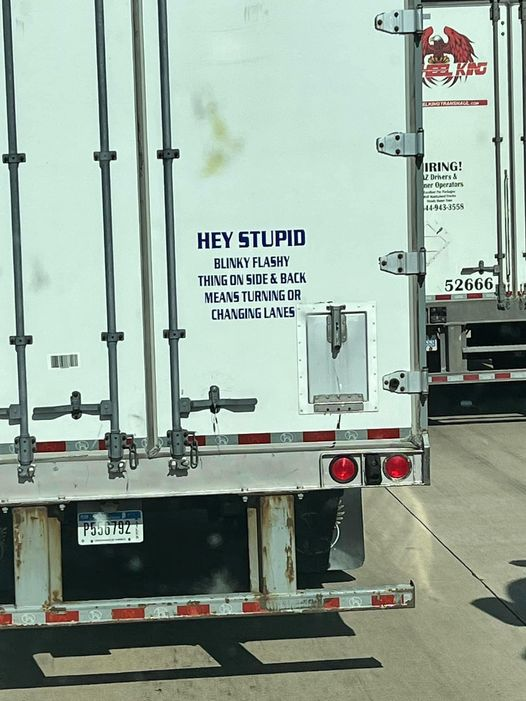