Geez, times 3. That front axle is an accident just waiting to happen. I've never seen one that bad. If you use it that way and hit a good bump or some unseen obstacle that axle is just going to split in half. I would not just be on the look-out for a replacement axle, I'd definitely get one.

My crystal ball shows an unhappy Cub sitting on it's nose!!

That Cub was likely used to mow a lot of uneven ground where the axle was pivoting down into the pulleys. Just don't do this with it. 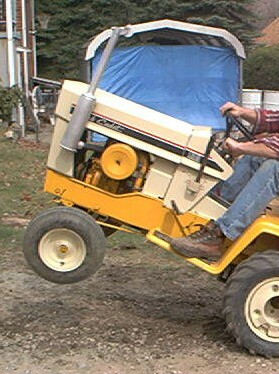 I snapped a front axle on a 126. It is a major pain. The tractor doesn't want to roll back to the shop, and it broke in the mud and rain. It was inconvenient as could be, but the guy I got my replacement axle from had a sweet Original.

Replace it before you put it back together.
J

jerry.a.johnson said:
Wow! You guys don't have much good news. Hmmm. Will ignore the front axle, work on the rest, and start looking. Was the front axle the same for the QLS? 1250 - 1650?
Click to expand...

82 series axle casting is the same, too.

Shipping to Idaho will be the downfall!

Why not just weld it?

I've had a couple of mine welded up and haven't had any problems. Of course, mine weren't worn quite that bad, and I haven't given them much of a hard workout, but it's an option.
P

jerry.a.johnson said:
Wow! You guys don't have much good news. Hmmm. Will ignore the front axle, work on the rest, and start looking. Was the front axle the same for the QLS? 1250 - 1650?
Click to expand...

Can’t help you out with your problem, but I did enjoy soaking in your hot springs.
J

@Paul Turner....Ha ha! Actually live downriver from "my" hot springs and get teased about that and the campground quite a bit. And I look a lot like the few pictures that exist of the old trapper that area was named after. I've been to "my" hot springs numerous times but always for business, not enjoyment so I don't have any good memories of that particular place. One in particular was a college kid who went there in the winter to commit suicide. He shot himself in the water with a handgun pointed upwards under his chin. The bullet went up behind one eye and pushed it out a little and never exited his skull. He never lost consciousness and talked to us while we packed him out on a gurney in knee deep snow. But the self inflicted lobotomy scrambled his speech so much that he was talking in sentences of unrelated words. Don't think he knew where he was or who he was. Last time I talked to his dad the kid had had a number of operations, and they still weren't sure what he was going to be like.

That and other worse stories, , are why I tend to avoid those springs if possible! There are some nearby springs, like Stanley Hot Springs, that I have soaked in and enjoyed on backpacking trips. Bit of a hike though at around 5 miles or so.

Regarding the axle that was my first thought...welding...but figured maybe there was something I was missing there. BUT I have found a used one for $110 including shipping (if the order doesn't get canceled, the axle doesn't get lost in the mail, etc.)

Here is something else I discovered. Cub Cadet White (Iron Gard) is not the same white or even close to the original paint on my 1650. See pic below. By looking at white areas protected from the sun, like at the top of the tower under the cowling, I have a pretty good idea what the original color was. Don't get me wrong...I like this Almond color better contrasted with the Marigold yellow color. But am I missing something? Are there two Cub Cadet White colors? I've only seen one white color offered (like on Digger's site).

I ordered a few rattle cans and in the last few days got rid of all the rust on the front wheels and painted them. My original plan was to get rid of all the rust I could find, touch up where it was needed, and generally leave the nice old "patina" alone. Because of the extreme difference in paint colors, that plan is now out the window. Still pondering on how I will move forward. 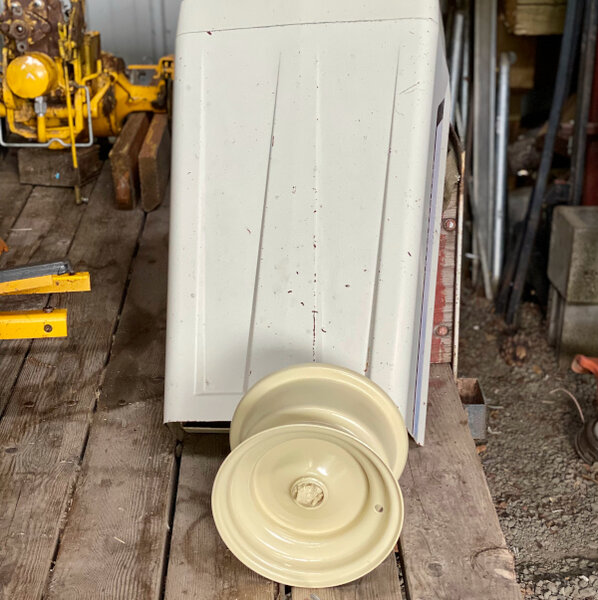 I found that Cub Cadet did have two shades of their "white". I had a SC I was wanting to flip and it needed paint bad on the hood, nose and side panels. I ended up getting a chip off the hood underside and had the paint mixed from that. I agree on that Almond color on the front rim. Not even close to OEM color.. Good luck.

What's the number on the white you used.
Iron Guard 935 is what I used on my 149 project several years ago and it's not that almondy color.

Iron Guard 935 white next to an original QL hood 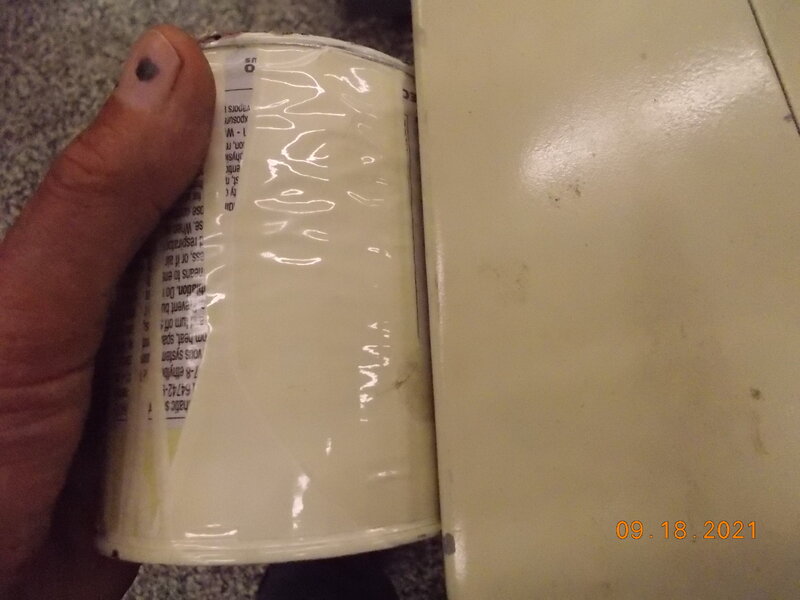 Here's some info from the old version of the forum:

These colors are not absolute. Your PC video capabilities and monitor settings will greatly affect their rendition and they are intended as a comparison only. (Color chips courtesy of Jim Chabot.)

Thanks guys. That makes more sense. I've seen what looked like different shades on different photos and machines on this site. The rattle can I got was Cadet White, 759-3259. It would be better called "Cadet Almond, 759-3259". Nice paint...applied nicely over the auto primer white I sprayed on first...but definitely not White. When I first started spraying it looked almost light yellow. Made me jump thinking I had grabbed the wrong can and was spraying the wheels yellow!

What you bought was just that Cub Cadet Corp paint, not IH paint.
I have a spray out comparison that I did using two IH whites (neither was 935) and the Rustoleum Canvas white.

Took it to the summer IHCC IA chapter #5 show last month in Albert City, IA and the canvas white by far was the best match for most of the white on the big red tractors. There were very few Cubs there besides mine, kind of disappointing really for a chapter state show.

The three shades I posted were for IH Cub Cadets. Hard to say what shade(s) CCC/MTD is selling for paint.
J

Thanks so much everyone! Should have asked these questions before I "bought and shot". And glad I just bought a few rattle cans. Think I will go back to the drawing board and start over. I've read much of the Rust Oleum vs. Iron Gard threads on this forum and see valid points on all sides. There is almost no Rust Oleum in this area anymore (hardware & auto stores) so that makes that part of the equation mail order like everything else. I used Dupli-Color engine flat black for much of the engine and overall am satisfied so far with that. Dupli-Color has supplanted Rust Oleum around here. But not a big enough selection to find compatible colors for the 1650 though.

I've never done any air spraying before but maybe time to bite the bullet and buy a sprayer for the air compressor. Maybe time for this old dog to learn a new trick. Lots of problems there though since I don't have a heated shop/garage and the weather is about to turn. My goal was to have the wheels and tires done and mounted on the spiffed up frame with the engine connected and tested before the weather turned. Still hoping to make it.
You must log in or register to reply here.
Share:
Facebook Twitter Reddit Pinterest Tumblr WhatsApp Email Link