well harry FYI... I am having the front 10" x 6" rims / tires done at the shop, and I will be doing my own rear 12" x 12" wheel tires this weekend. and I hope that I would consider myself a real cub guy due to the commitment that I have made to this brand thus far, but somethings are just easier to hire out especially if I got the cash on hand to do so. time / money weighs out the differences and I realize it is just more efficient to send the fronts to the shop. I have heavy wall skid steer 8ply wall 18" tires being installed on front they are very difficult to hand install so the machine is the way to go! the rears are 8ply skid steers but those I can manage.
H

Well ok Mark - you're talking 8 ply skid steer tires. That's a whole different ball of wax (rubber). If had thought you were committed to thoughts of the IH gods but you're doing something that's really a stretch (harder rubber)

As in other threads awhile back, I am totally not afraid to let someone else do the front tires. I did ONE front tire on my 100 and earned my badge...that's good enough for me.

As for the backs, I haven't had to do any yet.

IMO, I'm absolutely content slapping out a Jackson or two and having them done by someone that has all the equipment so I can put the rims and fresh skins back on my ride, crack a cold one, admire and pat myself on the back for mounting them with the tread in the right direction...

PACub100 said:
with the tread in the right direction...

My opinion on the tires is to have a professional do the front ones at minimum... They might be small, but they are an immense pain in the ass. The local tire shop mounted them for $10, and that is money well spent!

Skid steer tires on the back? You better take them with you when you go to the tire place to get the fronts put on! I took a set off once, and swore I would NEVER do that again!!!!
I put any size front tire on and don't think twice, but a heavy ply skid steer tire? NO, NO, NO!

Don't know, unless they were super inexpensive, or maybe because they have the AG tread on them. Took mine off, because someone really wanted to buy them! I personally would not use them. To me, Carlisle Tru Power is the way to go.

I must correct myself they are 4ply. SKID POWER H.D. 18"x 8.5"-10" TIRES on 10"x 6" WHEELS
and also, the 5-lug taper bearing hub upgrade. this is what they look like, I plan to build and install a PF ENGINEERING front-end loader, so this justifies the heavy tire / hub set up. rears coming soon. p.s. they were not super inexpensive I have $500.00 in rubber alone! so my reviews that I've researched from owners of this tire state that the tread has a long wear life and good traction control. so, without any further experience of my own I made a decision which I thought was best for my tractor, I do not want to be doing this again anytime soon!

Hey PAcub100 Marty, I'm with a cold one right now I'm admiring and patting myself on the back, for the tread is in the right direction...

I did consider the Carlisle Tru power. aggressive lug by all appearance, I chose the skid power also for the wider shape of the lug which has a bit more surface area which I believe will be a little bit gentler in the lawn if I should need to work in, on, or around grass / lawns.

Who put the tires on?
The wider gap between the lugs may be more lethal on a lawn. Turf tires have a tight tread pattern.
Last edited: Jul 23, 2022

tires installed by local tire shop, as far as how they treat the lawn? will see very soon..

mgwin said:
Who put the tires on?
The wider gap between the lugs may be more lethal on a lawn. Turf tires have a tight tread pattern.
Click to expand...

The turf tires can be more of a danger to the yard when they lose traction and begin to spin. The tractor treads on two of my tractors work really well, and do not spin regardless of how moist the yard is.

hydroharry said:
One thing that I think PACub100 may have been referring to that I really didn't like about my 1872, was the cheapening of the fender pan. CCC did away with the side stiffeners as well as most of the battery box. If you leaned on the fender you could see it flex down slightly. Never happen on the earlier IHCC fender pan like the 1x8/9 or Quiet Line series (but I never looked at the pan on an 82 series or even a 982). I'm assuming the 82 series was the same as the 1x8/9 and Quiet Line.
Click to expand...

Here is a Quietline rear fender pan. On the "CCC" 82 series, the battery tray was a separate part that was bolted to the rear fender pan. As seen here, the tray is welded to the fender pan, and has the two side panels, or stiffeners. I still need to look at an IH built 82 series to see if they were like this, or like the CCC units. 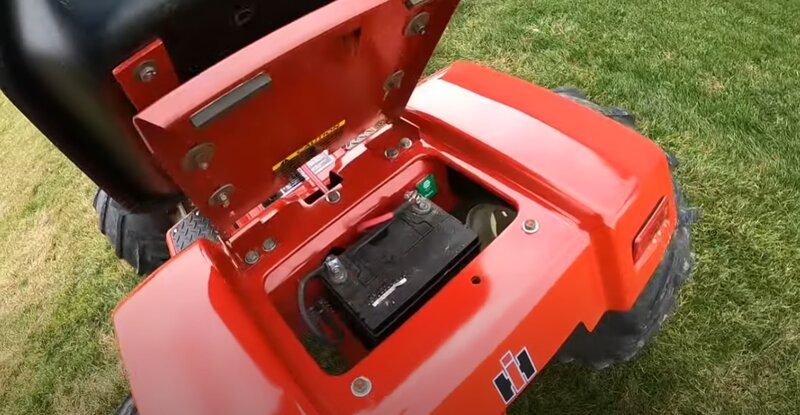 What I was getting at was replacement of metal with plastic. Like a comparison of my 1450 to the 1864 recently acquired... the hood and side shields are plastic vs metal on the 1450. Also to raise and lower the deck, the handle on my 1450 - metal, vs plastic that eventually will become brittle and break on the 1864.
I get it, plastic is cheaper and easier but the 1864 wouldn't have been a cheap machine new...had it been me shopping for this thing new, I'd be inclined to up the cash for the extra tin and metal components that are exposed to the weather and see a lot of use.

As far as the fender pan, I already dinged the 1864 with a little tap on one of my dad's pcs of farm machinery. I can't say anything about the 1450 but I kinda wonder if they're the same gauge...

I think you'll find the main complaint with the 1990-97 Cyclops tractors is the plastic front clip. Otherwise, they are a fantastic heavy duty machine with a lot of convenience features.

The only major plastic parts on a 82 series is the textured dash panel tower cover, fuel tank, and the steering wheel.

1811Cub said:
I think you'll find the main complaint with the 1990-97 Cyclops tractors is the plastic front clip. Otherwise, they are a fantastic heavy duty machine with a lot of convenience features.

The only major plastic parts on a 82 series is the textured dash panel tower cover, fuel tank, and the steering wheel.
Click to expand...

Oh, I like this machine ALOT... it's like my 1450 on crack. I COULDN'T bog down that motor and it left no grass uncut with that big 54" deck

I'm a Cyclops fan, have owned an 1860, 1862 and a 2284. None of those three had a plastic problem and the lighter weight, probably negligible and the fact they don't rust and I just like the look makes me lean their way. Also the power in these went from Magnum to Command and I see that as a plus.
But my earlier 1872's were the bomb.

Regarding vintage, there is a similar thought process on guitars. CBS bought Fender in 1968 or so and some people would suggest there was an immediate decline in their products. So a 1969 amp sells for half of the 1968 cost. Nothing changes overnight. Technology allows then to make incredibly good guitars today and the vintage market is insane, I see both sides.

Be happy with what you got.
I could go back to my trusty 149 and make it work!