After the big "work day" debut, I brought the dozer back to the garage for a thorough looking over. There were a few bolts and nuts that needed tightening as well as the left side caliper that was starting to get loose again. For the caliper I'm going to make an angle bracket that will bolt from the caliper mount to the left side frame rail. Pretty easy to make and should take care of the problem with the mounting bolts coming loose. I also need to drill a largish hole in the bottom of both caliper mounting brackets so water can drain out. They fill with water every time we wash it.
I finally assembled all the necessary bits to install the 3-point hitch limit switch. That's on and working well. Now I won't have to worry about tearing the winch mount off by overzealously raising the 3-point.
I have also been adding a few various cable tiedowns to keep wiring up and out of harms way.
The blade is working really well and all that remains is to add the two lower push arms to take a little stress off of the center push point. Still need to source one more turnbuckle so I can make those.
Concerns:
I still need to pull the tracks off and take them to a buddy of mine to have the holes cut in the track pads. Where the sprockets meet them. So far the tracks have been working well and we've had no more problems with the chain filling up with dirt over the pads but it has been a problem in the past so best to get that done.
I'm also curious to see if the generator can keep up with the winches and electrics. So far it has, but I'm giving some thought to adding an alternator at some point. I'll run it off the pto pulley. 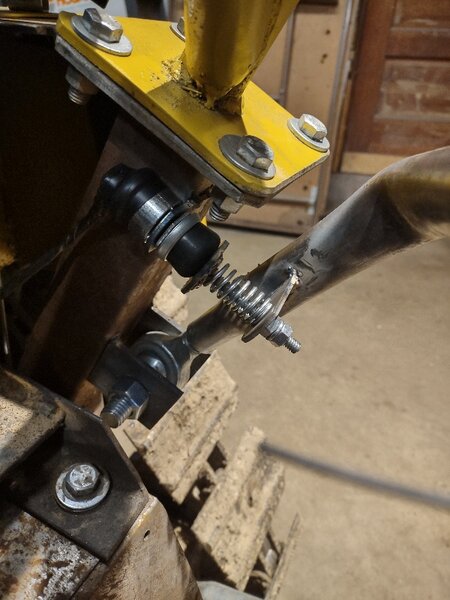 3-point hitch limit switch. Seems to be working quite well...

I've been struggling with a tool problem for awhile. I've got a Hobart 125 wire feed welder and....well...it won't (reliably) feed wire. One thing a wire feed welder SHOULD do is feed wire. After much maintenance and misery, I've decided to get another welder. I had previously used Lincoln stick and wire feed welders for years with zero issues so I've decided to go back to them. I'll get the largest and most well equipped Lincoln wire feed that I can that still runs off 110 volts. I like the versatility of 110 volts and rarely am called upon to weld locomotive frames together so it's right for me.
While I'm shopping, if anyone wants to chime in on experiences/recommendations I'd love to hear it.
E

William Adams said:
I've been struggling with a tool problem for awhile. I've got a Hobart 125 wire feed welder and....well...it won't (reliably) feed wire. One thing a wire feed welder SHOULD do is feed wire. After much maintenance and misery, I've decided to get another welder. I had previously used Lincoln stick and wire feed welders for years with zero issues so I've decided to go back to them. I'll get the largest and most well equipped Lincoln wire feed that I can that still runs off 110 volts. I like the versatility of 110 volts and rarely am called upon to weld locomotive frames together so it's right for me.
While I'm shopping, if anyone wants to chime in on experiences/recommendations I'd love to hear it.
Click to expand...

I fought with my Miller for a long time, seemed to had a wire feed problem. New rolls, liner, tips and nozzles didn't help. Then I ran out of wire and got a new spool. It feeds like a new machine now. Just a crappy spool of wire.

Ed,
Thanks for letting me know I'm not the only one! Lol... I have tried 3 different spools of wire from different manufacturers with the same exact results. It's time to throw this thing under the bus and get another one. I'll keep everyone in the loop...
J

On the subject of Hobart wire feeders, the guns are junk, I've got one...........................it needs to be kept fairly straight to ease feeding wire. Think Tweco guns, I've got another smaller welder with one, I could tie the hose going to the gun in a knot and it would feed I truly believe.

I've had rust/crud accumulate in the liner on the 180 Hobart, had to pull the liner out and flush it out in order to make it go again. They sell new liners, but can usually get the old one up and running again.
L

I have a Miller had same problem found there were different feed rolls, correct ones for wire size fixed problem. Pacemaker cured all my welding prblems now , the pits

Still working on the welder problem here. Thanks all for the input. I'll try a couple more things but I'm not hopeful.
Rather than writing posts, we've been chasing spring chores and dodging weather like mad. Will and I have been beating the junk out of the bulldozer of late. The wifey bought 12 yards of composted topsoil for various garden projects and lawn tune-up so we've been trying to distribute it. I had to cut down a large terrace in the yard first so I used the dozer to knock it down from unclimbable terrace to gentle grade, then started to move 6" of topsoil onto it. 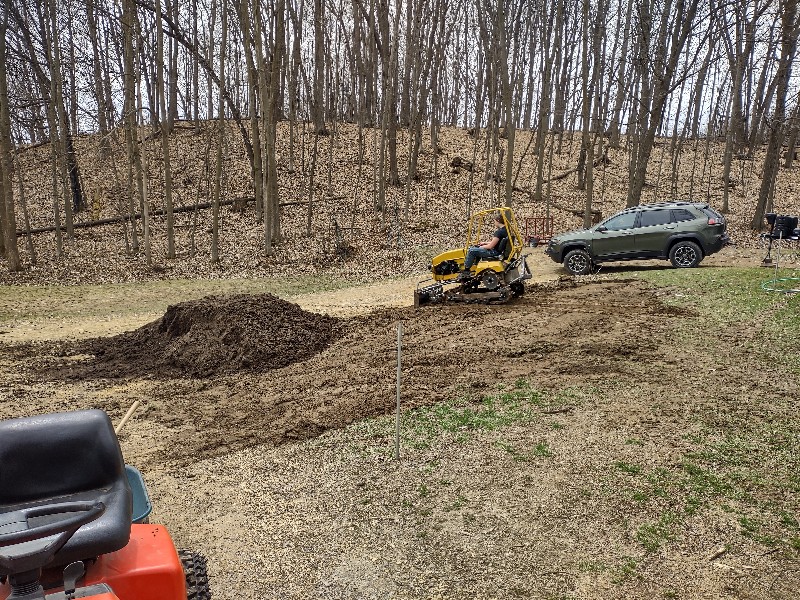 The dozer proved to be much more capable than my operator skills. I tilted the blade (manually) as far as it would tilt and then just started peeling the side layer off in strips. There's not enough weight on the blade to get it to cut through the sod when it's flat to it, but by tilting the blade you can get it to cut off strips of the sod. After it's got strips cut through, I could easily get the blade to dig down until the tracks would spin. I worked the terrace down the hill until it was gone and just a gentle slope remained. Pretty easy and took an hour or so.
Momma's pile-O-dirt arrived and we set to work moving and spreading it with the rear (Johnny?) 3 point hitch bucket I built. Turns out, it works pretty well! 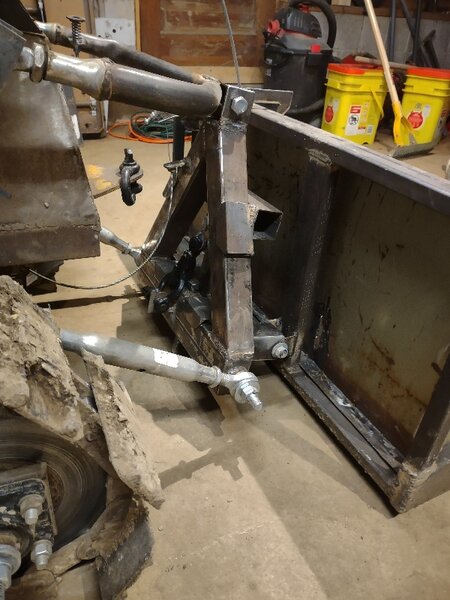 The bucket just slips onto the 3 point hitch. The release lever and latch stays on the 3 point when the bucket is removed. 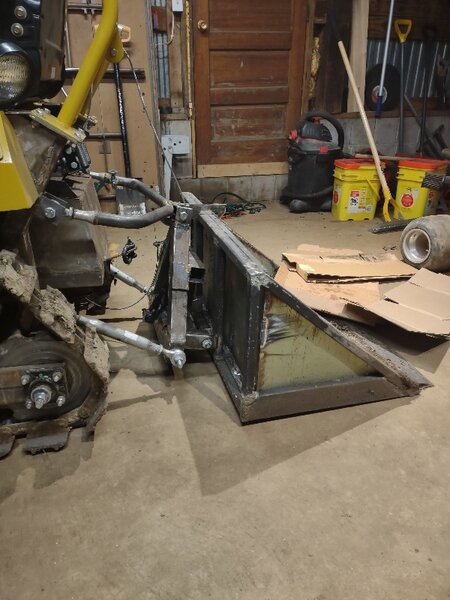 Looks pretty dog-patch because of the used metal/tetanus, but a coat of (eventual) paint will help. 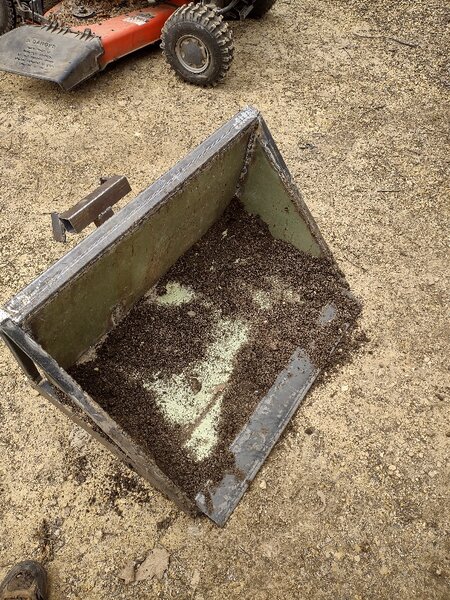 I was afraid it might be too small. I didn't want it to be wider than the dozer so it's 36" wide by 20" long by 17" tall. All I can say is that it will fill and move waaaaaay more than a full wheelbarrow of soil. It's all the rear winch can do to pick it up full.
Here's a short clip:

Rather than just trip the latch to dump it, we've been setting the bucket down, tripping the latch (it locks in the open position) then driving off while lifting the bucket. It works fantastic with the caveat that the topsoil is really sticky and won't dump all the way. It should work better with the 4 yards of gravel we've got coming to fix the driveway.
We did close to 6 yards of soil moving before getting chased off by the rain. I'll use the downtime to do a bit of checky/looky/adjustment. It's running better and better. The steering is, well, differential steering. It doesn't like to turn when the tracks are down into full contact with the dirt, so we just put some pressure on the steering brake and let it come around as it will. Once you get used to it, it's actually easier as it makes wider, easy turns rather than the dramatic, violent and unpredictable zero-turns it wants to make on concrete, or the trailer bed! Differential steering is not the same as clutch/brake steering, but it works fine so long as you don't horse it. A bit of finesse goes a long way toward saving spider gears.
We've had a couple failures. The rear lift pulley on the ROPS blew the bearing out. It's a stamped steel pulley with a 500 lbs max rating. The bucket load just shredded it. I replaced the sheave with a sheave from an ATV rated for 5,000 lbs and am going to change the cable attachment point. I'll also rig for a 3-part line which will take a lot of stress off the winch mount and fairlead.
There is more tweaking to be done on the rear idler sprockets and, of course, the hole-cutting to be done on the track pads but for the most part, it's all working.
More to come...
G

Impressive engineering sir !! And you're having fun...

Greetings all from thr new guy and his son!